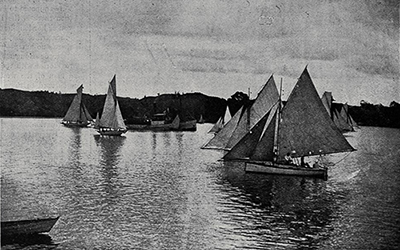 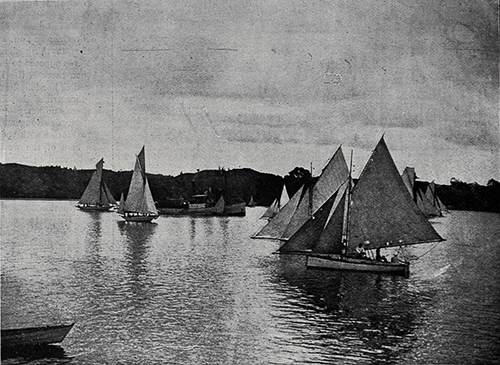 Favoured by Steady Hyperbole: There is scant evidence, in any of the images online of that regatta, of the steady breeze Charles de la Roche wrote about on page three of the inaugural edition of his Rodney and Ōtamatea Times. The course (Scotts Landing, round Saddle Island and back, twice—as sailed today) took the fastest boat, the Thelma, four and a quarter hours. Pictured, is the start of the race for half-decked yachts. photographer Henry Winkelmann Sir George Grey Special Collections Auckland Libraries AWNS-19010405-6-2

Favoured by beautiful weather, and a steady breeze came up from the south at midday.

The Mahurangi Regatta Committee and its energetic secretary, Mr W J Wilson, are to be highly congratulated upon the satisfactory results. The ‘Heads’ is one of the most suitable places within so short a distance of Auckland for regatta purposes. It being within reach of the Auckland yachtmensic, who are certain to take advantage of the outing, and should the committee decide to make it an annual event, as indeed they have every encouragement to do.

We cannot let this opportunity pass without a word of praise to the two local steamship companies. Messrs McGregor and the Coastal Steamship Company for placing their steamers the Rose Casey, and Kapanui respectively at the disposal the committee, the latter acting as flagship, and especially to the courteous assistance rendered by the genial skipper of each boat. Certainly (at one time) four steamers covered with bunting and about 25 yachts and boats in full sail, not to mention rowing boats blending with the already natural beauty of the place, the whole making one of those charming scenes never to be forgotten. About 250 people, including some excursionists from Auckland attended. A number of Auckland yachts left on Friday night for Mahurangi, but as there was little or no wind until the afternoon, some were unable to reach the heads, while others had to be towed in. Mr W J Wilson was assisted by the following committee: Messrs Lushington, W A Darrach, G Emtage, J Raynes, A D Grant, and S Scot. Mr C P Murdoch, vice-commodore of the Auckland Yacht Club, starter and judge. The following are the results:

Republished with light subediting for clarity and consistancy by the Mahurangi Magazine from the original as available on the National Library of New Zealand, Papers Past website.

Footnote: Half-deckers or mullet boats In response to an inquiry by the Mahurangi Magazine to the Mullet Boat Sailing website as to whether the half-deckers named in the Rodney and Ōtamatea Times report, and photographed by Henry Winkelmann, were mullet boats, or precursors to the mullet boat, legendary maritime historian Harold Kidd kindly provided the following:

The Flirt was built in Ponsonby in 1899 and was a 21-footer. The Belle was owned by C‍ ‍H Lushington of Mahurangi Heads and built by C Hewson at Auckland; she was 22ft. The Lily was owned by Captain George Emtage and was about 22ft. The Isis was built in 1889 for J Matthie as a 4-ton fishing smack, and was probably a bit bigger than the others.

So we clearly have the Flirt, Belle and Lily in frame. My guess is that the boat in the foreground is the Belle. There’s another image of her ashore behind the well-known Winkelmann pic of Lushington’s Muritai, with Mrs Lushington in the foreground.

The term mullet boat was rather restricted at this time and wouldn’t have been applied to these craft, but that’s just retrospective semantics. They are, if you like, proto-mullet boats. Half-deckers was the contemporary term.