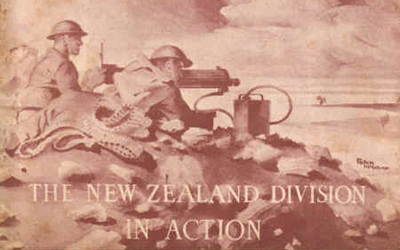 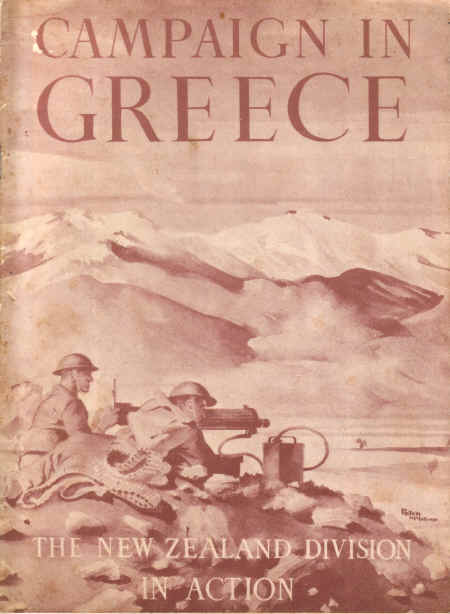 Demolition Expert: In Greece, Lieutenant Frederick William Osborn Jones of the New Zealand Engineers had to work with what was to hand, including purloined depth charges. artist Captain Peter McIntyre

The function of the authority was to prepare a regional plan for Auckland. The regional planning officer was fwo Jones. He was concerned at the rapidity of coastal land subdivision, and feared that Aucklanders would lose ready access to beaches. He told me that during the 1950s he had tried to persuade the Crown to purchase the land between the main road and the northern section of Ōrewa beach—as then, un-subdivided—and establish it as a public reserve; but the Crown decided that the price of £10 000 was too high. He had a vision that the other yet-to-be subdivided land behind beaches would be purchased by some public agency and opened to the public as regional parks. In particular, he hoped that the Wenderholm and Long Bay beaches would be protected in that way. But none of the existing local authorities had the will or the financial resources to do anything about it.

I and the other members of the regional planning authority were very much in support of Mr Jones’ vision and it was part of the proposed regional plan.

At that time, there was a concerted move to establish a regional authority for greater Auckland. Sir Dove-Meyer Robinson was strongly in favour, as were the members of the regional planning authority and Auckland local bodies. Indeed, during 1962 Sir Joseph Stanton had been engaged to draft empowering legislation; and during that year I was a member of a sub-committee of the regional planning authority that prepared the first draft of some empowering clauses to go into the legislation, including the clauses empowering the regional authority to raise money and purchase and manage land for regional parks. Those clauses were incorporated in the bill Sir Joseph was drafting.

The preparation of the required local bill was the responsibility of the Auckland Regional Authority Establishment Committee. I do not recall any opposition to the clauses that related to regional parks. The Auckland Regional Authority Act was passed in 1963 and the new authority had its first meeting in November that year—the clauses empowering the purchase and management of regional parks were of course in the act.

1964 was a very busy year for me. I had to steer the regional parks committee and the authority through all the formalities involved in raising a £1 million loan to buy land for regional parks; negotiate personally with Tim Couldrey for the purchase of Wenderholm; and persuade the committee and the authority to agree to the purchase. At that time, the authority did not have any parks administrative staff—a part-time secretary and a few rangers served the Centennial Memorial Parks Board.

There was no opposition to the raising of the loan. And as far as I recall the only opposition within the regional authority to the purchase of Wenderholm was from Tom Pearce and Eric Armishaw, who feared the spit would be severely eroded in the next major storm.

Rodney County Council was not entirely happy with our purchase of Wenderholm, because there was already a scheme plan of subdivision in existence for the peninsula, and as a regional park the county would lose the additional revenue that a subdivision would generate. However, the county council was in support of the regional parks concept.

The formal purchase of Wenderholm was completed on 31 March 1965, and the regional authority took possession, except that by agreement the Couldrey family were to remain in possession of Couldrey House for a number of years.

Once the land had been purchased, regional authority staff were then inclined to relax as if nothing further was necessary—the land had been protected! But I insisted that the park be made ready and opened for public use by the summer of 1965. I said that Aucklanders were very interested in the acquisition and were entitled to see what their money had been spent on.

It was necessary to raise a loan to pay the costs involved in providing sufficient facilities at Wenderholm to allow the park to be opened. But one way or another, all difficulties were overcome, even though the regional authority had few staff skilled in park matters. The park was opened in December 1965 and was heavily used over that summer. I am sure that as a result, the regional parks programme gained very substantially in terms of support by the public. Thereafter, purchases of land for regional parks never lacked strong public support.

At the 1965 election, I was returned to the regional authority as one of the members representing Auckland City; and I was elected chairman of a combined Regional Planning and Regional Parks Committee—the plaque at Wenderholm records this term of my chairmanship but not also my earlier term.

In 1966 the parks committee negotiated the purchase of the Long Bay property. The beachfront there was occupied by a large number of small baches on short-term tenancies. For that reason, and because public access required that an adequate traffic bridge be built over a stream, it was not possible to open that park to the public immediately.

Also during the 1965–1968 term, the land was purchased for the Shakespear Regional Park and for the Botanical Gardens. The Shakespear land had been suggested by Mr Bill Souter, who was the member for Waitematā County and who had been county chairman. Provision of a botanical garden for the region was suggested by a deputation from the Botanical Society—Mr J W Kealy sm and Professor John Morton. They identified the Nathan property at Manurewa as suitable for that project.

Some years elapsed before the necessary initial development work had been done and these three properties were opened to the public.

During the 1965–1968 term, initial steps were taken to identify other land suitable for purchase as regional parks. Among the sites considered was land at Mahurangi West. I did not stand for re-election to the regional authority at the 1968 election.

Following that election, Mr Jim Holdaway was elected chairman of the parks committee and during his term the initial purchases at Mahurangi West were made.

Footnote The preceding account resulted from a chance meeting with Judge Arnold Turner and an impromptu presentation to him of a copy of Jade River : A History of the Mahurangi. Judge Turner joked:

I will read it and correct the errors.

I did hope that there would not be any [errors]. But unfortunately the text is a little misleading on one or two details.

In particular, Jade River : A History of the Mahurangi has Jim Holdaway involved earlier in the genesis of the regional parks than was actually the case:

From the outset, the parks and reserves committee of the then Auckland Regional Authority, under the able chairmanship of Jim Holdaway, was conscious of an obligation to provide for the future recreational needs of its people on a scale much larger than its local bodies had been able to achieve.