Publisher’s tribute to Mont of the Mahurangi 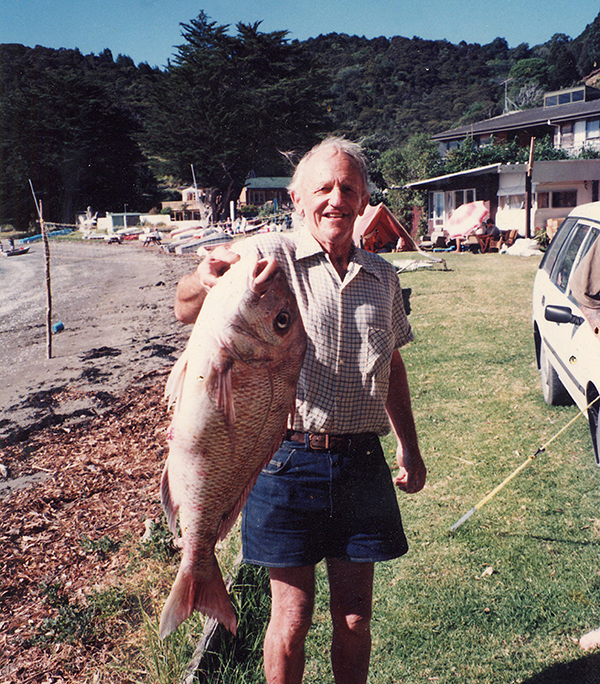 Sometimes the Mahurangi is blessed by the contribution made by part-time residents. One such couple has been Professor Sir Graham “Mont” Liggins and Lady Cecelia Liggins.

The Liggins’ contribution began in the early 1970s when the family was searching for an appropriate base for summer activities. When Mont and Celia drove down the hill into the bay, Celia announced there and then that she wanted a property in Ōpahi. The land agent’s retort:

This motivated Celia to frequently telephone the agent and eventually she elicited the response that some 18‍ ‍acres of bush were for sale—but an assumption had been made that they would not be interested. Celia and Mont surprised the agent by not only looking at the land, but falling in love with it. The property was purchased from Bill Kewene, who had subdivided the bay into residential lots in 1962.

The Liggins embarked on a detailed bush preservation and enhancement campaign—their approach no surprise to those who knew of their distinction in the research and practice of medicine. Mont, now Emeritus Professor of the University of Auckland and a knight for his contribution to medicine, is one of New Zealand’s most highly respected and internationally renowned medical research scientists. He pioneered research into the fetus and unborn; he showed that giving steroids to women experiencing early labour could accelerate infant lung development enough to enable premature newborn babies to breathe independently—his work led to a much deeper understanding of the birth process and dramatically improved survival rates among premature babies worldwide.

Mont’s work and inspiration to other scientists in New Zealand has led to the establishment, within the University of Auckland, of the Liggins Institute. This is a large-scale research body committed to world-class biomedical and clinical research in the areas of major health importance, formally opened by Queen Elizabeth II in 2002.

Lady Cecelia Liggins was Auckland’s first female obstetrician and gynaecologist. She is well known throughout Auckland having delivered well in excess of 4000 babies over her years in practice. She was recognized as a popular and pioneering clinician and, somehow, also found time to raise a family of four and to provide Mont with the support he needed to pursue research interests which would often take him away from home for months at a time. Celia was recognized after her death in 2003 by the establishment of the Celia Liggins Fellowship. An international search for the inaugural fellow recently saw the appointment of a geneticist from South Africa.

Mont and Celia attempted to gift the bulk of the 18‍ ‍acres as reserve, in order to protect the bush in perpetuity. When neither local nor regional council accepted their offer, the Liggins researched their options. A device was found that had been used in the Rotorua Lakes district whereby the establishment of a reserve strip along the road boundary of the property prevented further access being created, and thus successive subdivision. Also a covenant was created which prohibited clearing of trees outside of defined building sites, and although this was ignored in at least one instance, the overall effect has been to reserve the bush in private ownership—an instructive model.

In 1975 Mont commenced the second stage of the process. This involved his felling the mānuka regrowth and planting kauri, rimu and tōtara. This has been a long-term project and provided Mont with an often much-needed respite from his medical work. The family’s aim was to be at the property every second weekend and Mont used some of this time to carry out this physically demanding work. The clearing and planting also provided opportunity for other indigenous species to naturally regenerate. The Liggins property now proudly displays a fine selection of native trees, which will stand as one of Mont and Celia’s very substantial legacies. Mont and his immediate neighbour Brian Ladyman have together waged a campaign with poison bait stations aimed at the reduction of predation on birds, especially chicks, by rats and possums. The substantial increase in native bird life is largely due to this effort.

Mont and Celia’s daughter Jacki, who has continued the medical tradition as a practicing psychiatrist, and her partner, Annie, treasure what has been done and will ensure that the values established by Mont and Celia continue to be applied.

When asked what he most wants to see happen in Ōpahi Bay, Mont paused only slightly and then stated:

That the current Ōpahi harmony continues well into the future.

It is enlightening that this distinguished man of science and committed environmentalist values so highly how we get on with each other, in the small community of Mahurangi West.