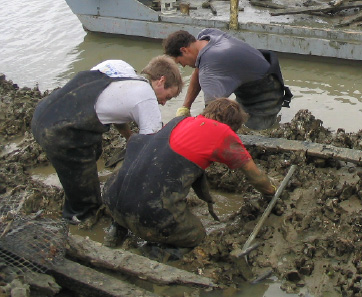 For men accustomed to working this hard, restoration planting will be a doddle. This work should never be necessary—the result of a derelict oyster lease the authorities allowed to languish for far too long. This photograph was taken in 2005; the problem is now so bad that it demands a mechanical solution. photographer Jim Dollimore

The concept is consummate.

With a severe storm approaching, faced with the likelihood of the harbour being closed for up to five days, and the prospect of having to lay off four or five workers until harvesting recommenced, Jim Dollimore emailed the editor suggesting that he make his workers available for Mahurangi Action Plan projects.

A flurry of phone calls and text messages followed. All agreed that the initiative was inspired—emphasising the vulnerability of the water quality to animal waste being washed into the harbour—but no, there were no plantings planned in the Mahurangi catchment for some weeks to come.

A further flurry of text messages followed—to and from local farmer Shelley Trotter, who had taken her children on an Australian holiday.

Absolutely there is Mahurangi Action Plan work to be done.

It involved releasing, dividing and replanting harakeke, and much more.

In the event, the extreme winds wrought greater damage to the district than did the accompanying rain. So once the storm had abated, the workers Jim had planned to be planting had their time cut out repairing damage at home. The remaining day before the weekend, saw the men hard at work repairing damage to the oyster farms.

Fortuitously, this was all witnessed by Kim Morresey, as it was the day scheduled for the new Mahurangi Action Plan project leader’s Mahurangi Harbour induction.

Meanwhile, this morning’s storm is likely to leave the harbour closed to harvesting again and see Biomarine workers planting harakeke along the margins of one of the increasing number of streams flowing into the Mahurangi from which, mercifully, grazing animals have now excluded.

It’s an ill wind that blows the Mahurangi no good.