After decades of inaction, action plan for clean up 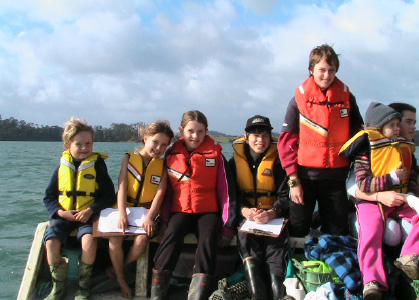 Back in the Harbour: Students reap their reward for an award-winning environmental project—a voyage up Dyers Creek to where they had previously undertaken riparian planting as part of the Mahurangi Action Plan. Biomarine kindly responded to a Friends of the Mahurangi request and placed an oyster barge and crew at the students’ disposal. photographer Ira Seitzer

Responsibility for governance of marine farming now rests with Auckland Regional Council. The transfer of responsibility and liability for the leases from the Ministry of Fisheries has been a prolonged process and has added to frustration of those seeking answers and, more importantly, action.

Meantime, Friends of the Mahurangi has been concerned that the pronounced sediment accumulation resulting from collapsed oyster farm structures is detracting from the practical Mahurangi Action Plan work being undertaken.

Key to the current initiative is identifying a means by which the 500–700 m³ (50–70 truck loads) of material, Biomarine estimates might be involved, is removed and disposed of. This is where Mahurangi River champion Peter Thompson comes in. Peter is determined to establish the infrastructure needed to begin a Mahurangi River dredging programme. The concept currently being investigated would involve the oyster lease cleanup being the first serious work performed by a purpose-built dredge-equipped barge.

Once a practicable means of cleanly removing and safely disposing the material has been established, all that will remain is determine who pays for what, and which leases are re-allocated or retired permanently.

The meeting is scheduled for 18 September and will take place on a property over-looking some of the worst effected areas at Dyers Creek.