Some capping and trading but an electric redemption 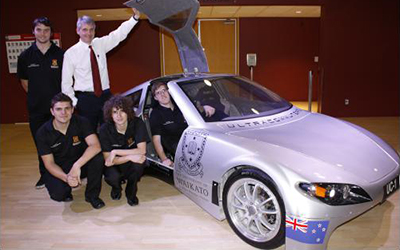 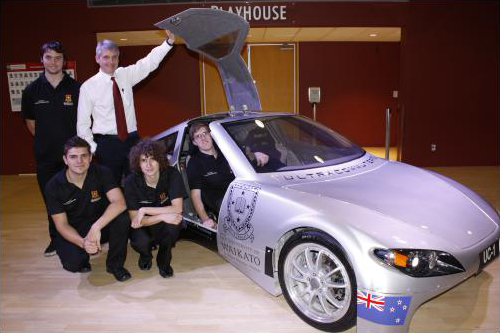 Ultra-Green Labour: The UltraCommuter electric vehicle unveiling was attended by Energy Minister David Parker, a glimpse of the vision Aotearoa needs as a world leader on climate action. The development team is based at the University of Waikato School of Science and Engineering. Image here is of subsequent refurbishment for 2013 Bridgestone World Solar Challenge. image University of Waikato

This piece was going to be titled: Too Little, Too Slowly—Pray it’s Not Too Late.

But then it would have been doing the Labour government’s announcement on climate action a huge disservice.

And it wouldn’t be doing any better than the New Zealand Herald editorial that failed to mention the measures’ sublimely redeeming feature: Commitment to electric vehicles.

The inclusion of electric vehicles in the government’s carbon cap and trade announcement is staggering. Not because it is not exactly right for Aotearoa, but because the safe thing to do would be to give no direction at all regarding hybrid, hydrogen, bio fuel or electric.

In most countries, electricity equals coal, nuclear or both. Praise hydro-electric power pioneers such as Lloyd Mandeno that 90% renewal electricity generation by 2025 is achievable, but Aotearoa should strive to do much better, much sooner. In those less fortunate countries, a wholesale change to electric vehicles, with no other change, exchanges one nasty for another.

Not so in Aotearoa. Cars charged with off-peak power overnight is not only a clean and cheap regime, but it is also powerful encouragement for us to ‘live within our means’. We will think twice before taking any unnecessary journeys that meant we had to swing into a service station and have the battery swapped—as effortless as that would be, it would be significantly pricier than the charge that trickled in while the car was sitting in its own driveway.

Electric vehicles available today, for example the India-built Reva (a.k.a. G-Wiz), would address the routine motoring needs of a majority of town and city dwellers. Those who need to routinely travel on 100 km–hr roads must wait for another generation of electric vehicles. As most households have more than one vehicle, ‘my other car’s a BEV’ (battery electric vehicle) would work for many.

This nothing and everything to do with the Mahurangi. Cattle and cars are the two big contributors to global warming. Exchanging cattle for trees, on steep erodible land, cures both the climate and harbour sedimentation. That just leaves cars as a major culprit.

Footnote  The Mahurangi Magazine has it on excellent authority that it is the Energy Minister, David Parker, himself who has had the courage to nail the electric vehicle colours to the Labour masthead.

The same authority speaks of having:

…huge confidence in [the Energy Minister] to get it right. He is thoughtful, hugely bright and very committed to the sort of outcomes that I think you would want too.