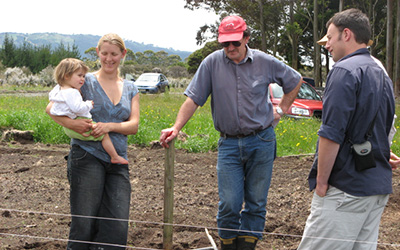 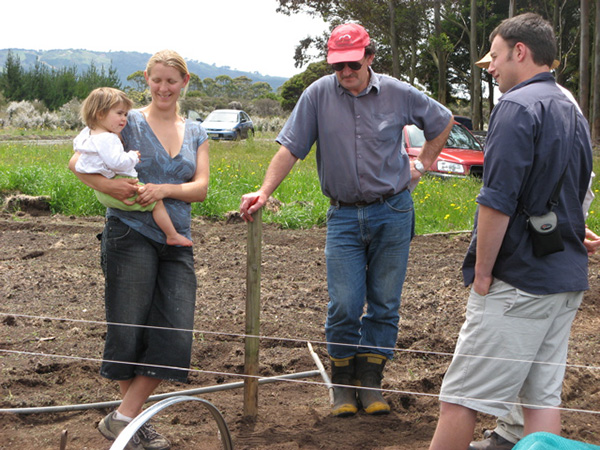 Sunday, Dr David Bergin and his assistant, his eldest son Michael, stopped at Mahurangi West on their way back from Northland.

David and Michael had spent the previous week thinning and pruning naturally–regenerating stands of tōtara on farmland. It is a Northland Tōtara Working Group project, partially funded by the Sustainable Farming Fund, aimed at developing methods for the sustainable indigenous timber production.

The project is part of an increasing body of work that seeks to re-establish indigenous species, particularly on land where pasture is unsustainable economically and/or environmentally—the crime, at least initially, wasn’t in the harvesting of indigenous timber, rather that there were few attempts to replant.

Although the main purpose of the Bergin’s visit was to take delivery of Mahurangi-sourced seed, David generally takes the opportunity, when returning from Northland to Rotorua, to meet and discuss the Omaha Pilot Open-Ground Indigenous Plant Nursery project. Conversation with Dr Bergin is a rich experience. At one point the discussion was the management of Ōrewa Beach. David’s work with dune stabilisation means that his insight into caring for these fragile systems is fascinating. He is very familiar with the beach at Ōrewa because he stops overnight there when travelling north to a Project Crimson, dune stabilisation or tōtara, project. An hour or two’s consultation would represent exceptionally good value for Rodney District Council!

Just why it took so long for the obvious to occur—to involve an established open-ground nursery in the project—none of the team now can quite fathom.

Prior to Rogernomics, of course, this work would have simply been done in the Forestry Research Institute nursery, which has long-since been absorbed by SCION, which is now effectively, with Australia’s CSIRO, ENSIS (David’s employer). But regardless of the merits or otherwise of the new profit centre based models, partnering with the private sector, in our case Taupō Native Plant Nursery, has huge advantages. If the trials are as successful as we hope, open-ground will be available to the market more or less immediately.

Had the project continued in isolation of the indigenous plant nursery industry, it may have struggled to have the methods adopted.

So having detained the scientist and his son with espresso and food for as long as was polite, whist extracting every morsel of knowledge possible, they were allowed to continue on their way back to the Volcanic Plateau.

Subsequently, this report was received from Dr Bergin:

Michael and I delivered the seed to Philip Smith at Taupō Native Plant Nursery on Tuesday. He continues to be very enthusiastic and supportive so will be a great collaborator in the project.

Philip will supplement the Mahurangi eco-sourced seeds with several seed lots he has collected from the Auckland region including toetoe, koromiko and tōtara. With the tōtara he has one-year-old seedlings in root trainers that could be lined out in open beds to test the second year growth as bare root plants. He is keen to test the coated karamu versus non-coated seed. For our records/files sometime, we need the info on what is coating the seed.

Also, Philip will produce a project plan for the sowing, lining out and other management details of the project. He will send a draft up for comments and decisions on where Michael and I can help with monitoring and recording procedures and performance at various stages. He has tight timelines so will be sowing seed very soon etc.

So a good meeting and prospects for a great project.