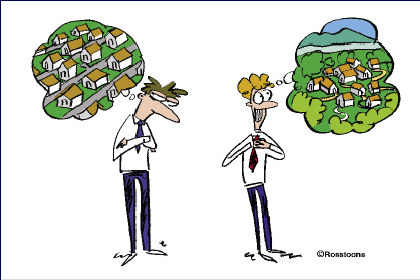 ’Toon Tells a Thousand Words: Cartoonist Ross Kinnaird is one of the many brilliant friends of the Mahurangi who, although by necessity a city dweller, has his heart in the harbour. January 2007 Mahurangi Magazine

Earlier yesterday, quite coincidentally, I tried to call Ross Kinnaird, to sound him out about a new personal project—the trifling matter of fixing MMP.

I haven’t spoken to Ross for some time; the last was at Georg Kohlap’s funeral. We might have had a serious session then, but we lacked the fortitude, in the absence of alcohol commensurate with Kohlap anecdotes.

Ross with his family and old friends of ours, and theirs, celebrated the 2007 New Year’s Eve within walking distance of 590 Mahurangi West Road. I was taking my first break from the marathon of producing the January Mahurangi Magazine.

While Ross made pasta dough, I kneaded him shamelessly to contribute a cartoon for the magazine. Magazines might be one of my great loves but they are poor things without cartoons. Actually, little kneading was needed; Ross’ passion for the Mahurangi had him readily agreeing.

The dinner was joyous; Ross had organised things so that the children got to extrude the pasta at the dining room table. This has since been adopted at our family occasions—the involvement is intense and totally captivating, and it certainly shut me up about the Mahurangi Magazine.

It had fallen to me to tell Ross that Georg was gravely ill. We discussed doing a retrospective of his brilliant photographic career, but in the event Georg deteriorated far too quickly for that to have been appropriate.

After dinner Ross regaled us with Kohlap tales that, complete with uncannily accurate heavy European accent, were totally entertaining to those who were not lucky enough to have experienced him. But for the minority there who had, also cathartic, and clearly so for our raconteur.

So yesterday, failing to reach Ross by phone, I e-mailed him and then prepared for a meeting with a developer who had contacted Friends of the Mahurangi regarding a proposed subdivision, of land with a residential zoning.

Because the developer had mentioned low-impact design, I had asked surveyor Richard Bromley for his help—Richard wrote the Dirty Word Mahurangi Magazine article that Ross kindly provided the cartoon for.

I opened the Mahurangi Magazine and indicated the ‘Rosstoon’ (Ross had had to produce a number of iterations before he nailed it, as he had assumed we were arguing low v. high -density, as opposed to low v. high -impact).

That was the watershed. We were now literally all on the same page.

‘Well, tell me who I can get to design this for me?’

The question was repeated a couple of times while I wondered why Richard was looking so introspective.

‘I’ll design it for you here at Buckton Consultants!’

I don’t know why I was surprised, because if anybody can put low-impact design into practice in the Mahurangi catchment, it is Richard—I suspect his whole life has been preparation for this project.

So, subject to agreement on terms, Richard received the brief to produce a concept plan, and we were all left pinching ourselves, for some different reasons but mostly in the knowledge that, if we succeed, this will represent the first local departure from, to use Richard’s quote: If we always do what we have always done, we will always get what we’ve always got.

Meeting over, I promptly departed for home, shooting to Richard: ‘this may well be Friends of the Mahurangi’s best work yet’.