Bring a picnic to the regatta, and to the prize-giving and dance… 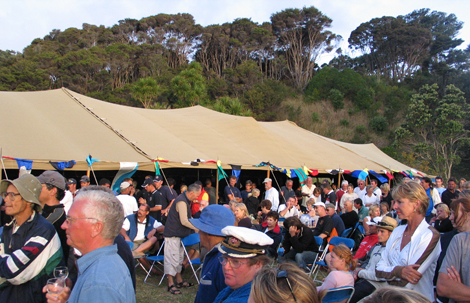 Ritual Prize-Giving: The prize-giving and dance was part of Mahurangi Regatta tradition, until the regatta lapsed, during World War Two. It was reintroduced at this gathering in 2005, to launch the Mahurangi Action Plan—the scene having been set by the previous year’s Mahurangi Regatta Ball held to mark Warkworth’s 150th. photographer Stephen Horsley

The trap, however, is that today’s folk are not Great Depression-conditioned and don’t necessarily think to pack bacon-and-egg pies, sandwiches and ‘the Thermos’ before family expeditions. Or maybe they do, if they are regular users of the regional parks. Either way, the regatta picnic policy sits very comfortably with regional parks policy, even if there were a few years when vendors managed to inveigle their various wares in—those who, on occasions, found themselves manning posts downwind of a dilapidated Mr Whippy van and its noxious generator certainly don’t miss ’em.

The Mahurangi Regatta prize giving and dance message is [was! See post-2010 footnote below] very different:

Please leave your food and drink aboard and patronise the bar and gourmet burgers in the marquee.but not since post-2010. See footnote

This apparently contradictory regime is justified because it is the bar and burgers that pay for the marquee and band. And although McEntee Hire kindly provides the marquee at a discounted rate, and the 18-piece Prohibition Big Band plays for costs only, that money must come from somewhere.

An admission charge is not an option. Not only would an admission charge result in a less inclusive event, it would be a non-starter in respect to park policy, which is for the park to be open to all, and be given over exclusively to one group of people. And not even just parts of it—the venue had become extremely sought-after for weddings under marquee, Scott Homestead nicely providing the Victorian ambience. The parks’ policymakers, however, considered it inappropriate and put the kibosh on weddings and other large events. The exception is the Mahurangi Regatta, on account of its historical link with Scotts Landing and the homestead.

The bar both helps fund the eventbut not since post-2010. See footnote and champions local brands:

As it is both irresponsible and unlawful to serve alcohol without serving food, a dedicated team produces gourmet burgers, hundreds of them in a very short space of time.

The challenge now is to get the message out that the bar and burgers pay for the prize-giving and dance. So please:

2010 end of crumpled cash This article was originally titled: Bring a Picnic to the Regatta, and to the Prize-Giving and Dance, Your Crumpled Cash and Plastic. However, since 2010, the prize giving and dance aligned with the good old-fashioned, leave-your-wallet-at-home picnic regatta ethos—that is, the Mahurangi Regatta prize giving and dance, since 2010, has been on an entirely bring-your-own basis since then.