Support for dance ensures survival of the revival 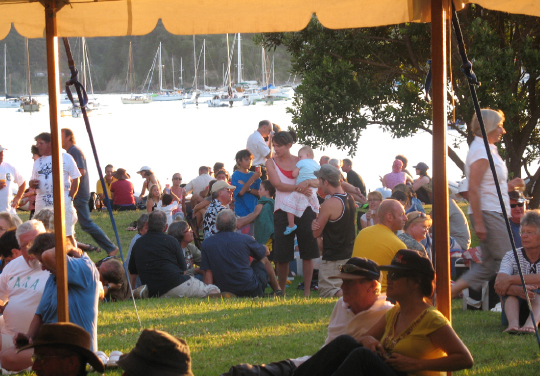 Settling In: The crowd comfortably awaiting the prize-giving, bathed in the rich hues of the setting sun and the 18-piece Prohibition Big Band. photographer Sarah Ransom

An email from the Weiti Boating Club nicely summarised the sea change:

Weiti Boating Club is racing to Mahurangi tonight and we plan to have our club barbecue and prize-giving ashore on Saturday evening at Scotts Landing, as we have done in past years.

We realise that your major funding for the evening event is in the sale of food and drinks, but as a club we feel we also need to provide for our members the use of a barbecue for those who like to cook their own tucker.

In view of the fact that we enjoy the events of the day and evening, the Weiti Boating Club Inc would like to make a token donation of $100 towards the cost of the event.

We will bring a cheque with us and find some person that looks official to give this to. If you see our club banner strung up, please come and make yourself known to us.

The 2007 prize-giving and dance had been a minor financial disaster. Just when it seemed that the message—that the cash bar and burgers fund the marquee and swing band—was getting out, bar sales in particular bombed.

In the cold light of the morning after cleanup, the brands of beer and ‘foreign’ wine labels spoke volumes—it was clear that many saw the format as bring-your-own. The organiser, Mahurangi Actionestablished 1974 as Friends of the Mahurangi, surmising that New Zealanders’ rapid embrace of the cashless society had also played a part, resolved to have eftpos facilities in place in 2008, where it accounted for a handy 12% of the takings. That ratio is bound jump, come 2009, as more get the message:

Take your picnic to the regatta but only your plastic to the prize-giving and dance.

The 2004 Mahurangi Regatta Ball was inspired by the prize-giving and dance that was part of the regatta at the time it lapsed, during World War Two. The ball was memorable and the majority, on the night, expressed the desire that it be an annual event. But it was a high risk affair, as was underlined later that year when Rotary International’s hugely successful annual fundraiser at Kawau Island was put out of business, by one ruinous weather event.

The prospects of a follow up received a fillip when Auckland Regional Council requested a regatta after-match function to launch the Mahurangi Action Plan. Friends of the Mahurangi suggested the traditional prize-giving and dance format as ripe for revival. That year the regional council picked up the costs of the marquee and band and the following year, Rodney District Council covered the cost of the marquee. But with bar sales down in 2007, the notion that the event was close to being self-funding was more than a little previous.

With the generous underwriting provided, the support of Ransom Wines, Ti Point Vineyard and McEntee Hire Warkworth, and the patronage of the bar and burgers restored, as symbolised by the ‘token donation’ of the thoughtful Weiti Boating Club, the setback of 2007 can be left astern—a squall weathered, requiring some running repairs but leaving no lasting damage.

Aside from being the group responsible for reviving the Mahurangi Regatta, Mahurangi Actionestablished 1974 as Friends of the Mahurangi is committed to the event long-term because of its power to build the community support, local and extended, that is needed to care for the Mahurangi Harbour.

Some of the Mahurangi’s best friends are Aucklanders.

Update—no ‘bar and burgers’ since 2010
There is no longer a cash bar nor burgers for sale. From 2013, the format returned to that of the prize-giving dance that prevailed before the regatta lapsed during World War II, when it was on bring-your-own basis. This makes the event much less financially risky, particularly when wild and/or wet weather intervenes, as it did, spectacularly, in 2011.