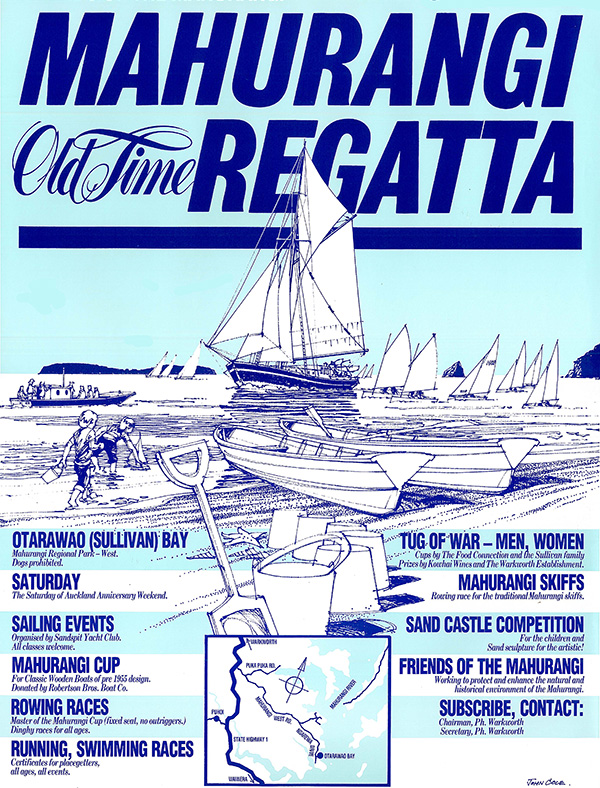 Handsome Poster: One of the many contributions by commercial artist John Cole to further the Mahurangi Action goal of engendering community support for the protection and restoration of the harbour. artist John Cole 1989

Even in 1977, it was inescapable. Having revived the regatta, after it had lapsed for three decades, Mahurangi Actionestablished 1974, as Friends of the Mahurangi found it had a tiger by the tail—an event that insisted upon being held annually.

In 1987, when Michael Gordon was elected to the organisation’s executive, somewhat against his better judgment, he found he had minimal tolerance for interminable discussions on up-coming regatta. Preoccupation with the regatta was epitomised by the perennial committee meeting question:

What time’s the tide?

The question, which should simply have been dismissed as rhetorical, would be followed by competing claims as to when the New Zealand Herald tide chart would be printed.

The significance of the tide, of course, was the impact it would have on the programme for the shoreside events—whether the events that demanded an expanse of sand would be held in the morning, or earlier or later in the afternoon. The resulting supposition, to those who were not committee animals, could appear interminable. Michael’s sense of self-preservation provoked him volunteer for the role of regatta director and to beg to be allowed ‘to just get on and do it’.

In those days Michael was a chief engineer aboard the Union Steamship Company’s trans-Tasman roll-on roll-off ships. While off duty, Michael used an early word processor to compile a regatta operations manual. As well as critical information such as the booking of St John staff, it was a veritable mine of the minutia that can be wastefully time-consuming if not recorded, such as the quantity of sweets for the lolly scramble. Michael’s approach meshed nicely with the established regatta philosophy of doing it once and doing it right—the permanent regatta road signs that, from 1978, were bolted in place in those early years when the route to Sullivans Bay was not at all obvious.

Another example was the regatta poster that was designed by commercial artist John Cole in 1989 and printed in quantity, so as to eliminate, as an annual chore, the production of a poster. The handsome poster was just one of many works of art, maps, and artist’s impressions that John Cole produced for Friends of the Mahurangi, mostly without reward. When John died following his illness with cancer, the John Cole Trophy was conceived in his honour, and is awarded for aesthetic contribution to the Mahurangi Regatta. Indubitably, the spectacle of the shoreside regatta—from languid picnic to frenetic beach races to stirring tug-of-war—is a major aesthetic contribution to the Mahurangi Regatta.

Thus, it is utterly appropriate that now, in addition to the other illustrious recipients’ inscribed into the deck of the trophy—a bronze by sculptor Garth Middleton, evoking the form of the classic A-class yachts—is the legend:

Footnote At the 2008 Mahurangi Regatta Prize-Giving and Dance, Michael Gordon was presented with the John Cole Trophy by the mayor of Rodney District Council, Penny Webster.