Warkworth riverside dinner could have been regatta

A number of times the Mahurangi Regatta has had to be cancelled. 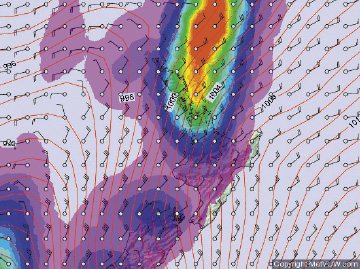 Unambiguous Forecast: The sort of forecast a shoreside regatta director dreams of, in that the decision to cancel is made very easy. chart MetVUW.com Weather and Climate Service

On one occasion, controversially, it was the weather before the regatta, rather than on the day, that caused the cancellation of the shoreside regatta—the unprecedentedly rain-soaked regional park wouldn’t have accommodated the thousand cars expected.

It is now some considerable time since the sailing has been cancelled. There are sufficient stout souls who strongly resent being denied the opportunity of pitting themselves and their craft against the elements to ensure that the racing organisers would be most reluctant to intervene. But while it is hoped that the threshold is never reached, it is conceivable that that forecast conditions could be so extreme that it would be blatantly irresponsible for even the most gung-ho committee to not call off the racing—the risk to life and craft simply too great.

The prize-giving and dance is another thing entirely. Weather that would simply be a romp, sailing around Saddle Island and back, would equally be madness for a marquee event—the 2003 weather-bomb-wrecked Rotary International charity fundraiser at Kawau Island was all too close to home.

As for the Warkworth riverside dinner planned for this evening, one table of eight has voted to celebrate the editor’s birthday at 590 Mahurangi West Road, and donate the ticket money to the Jane Gifford and the Kawau Coastguard—making a little more space for those brave souls who elect soldier on…

…in the ground floor of the New World car park.