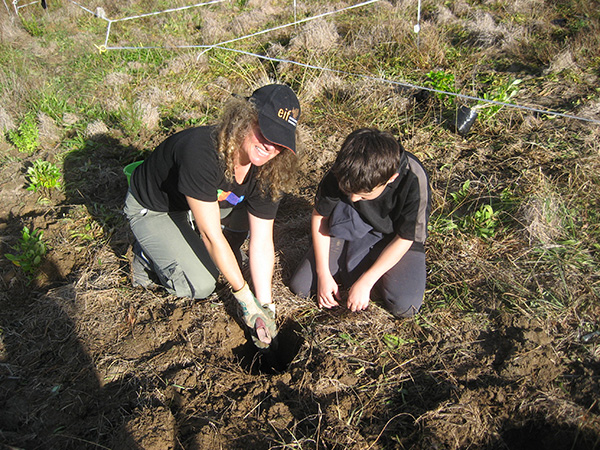 Depth of the Problem: One of the first holes dug by regional councillor Christine Rose, assisted by a nephew, nicely demonstrates the seriousness of the erosion problem. photographer Bevan Woodward

Sunday’s weather was sublime, as was the planting at Sullivans Bay, on a number of levels.

Regional councillor Christine Rose said to the writer on her arrival:

I couldn’t resist your email!

…notifying ‘Mahurangi and friends’ of the planting. Neighbouring Mitapronounced: me-tuh Bay is the councillor’s favourite family holiday campsite. With the recent attacks by the district council on the Auckland Regional Council, the scene must have been robustly reaffirming for the regional councillor—the hillside resounded with heartfelt declarations of gratitude for the regional park system. The councillor’s nephew-and-assistant was heard asking:

Why don’t you want one planted in that hole?

Answer: Christine had inadvertently created a tomoNew Zealand English. Either the back-formation of Waitomo, or te reo Māori for tomoau, abyss into a tunnel-erosion pipe. Now the planters appreciated that ranger Matthew Williams was not exaggerating when he’d described the hill as badly eroded. A photograph was taken of aunt and nephew with the councillor’s spade—and it was no lady’s spade—immersed to its full depth into the tunnel.

The large number of volunteers was clearly appreciated by the park rangers who had the site extremely well prepared. Even a couple of portable toilets, lest planters were too weary to stagger down to those near the beach—it is possible, of course, that the psychology of providing portable toilets perched conspicuously on a trailer was to remove any excuse for workers to slip away and not return to the planting. 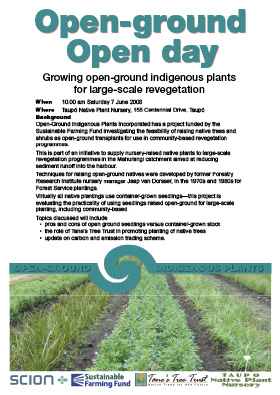 Overly Costly without Open-Ground: The cost of establishing indigenous species is disproportionately high, thanks to a failure to learn from exotic-forestry nursery practices.

Lunchtime provided much-needed sustenance and eliminated the distraction of work to the many conversations in which the Mahurangi, the region and the world was being put to rights. The editor prevailed upon the regional councillor and the Green Party candidate David Hay to discuss, in their one-on-one, processes that might be appropriate in this where to from here stage of the Mahurangi Action Plan—David’s expertise in the field of multi-party processes is simply too valuable to go untapped.

As the enthusiastic throng converged on the last corner of the area to be planted, the sense of satisfaction should have been tempered by the reality this was a infinitesimal fraction of the 12 220-hectare Mahurangi catchment that desperately needs such protection. Sunday’s planting was maybe 0.5 hectares. Supposing that could be repeated throughout the planting season, say 10 hectares annually, this would address just 0.08 percent of the catchment, or after 30 years say 2.5 percent.

Not to put too fine a point on it, the logistics of restoration planting, or planting for sustainable indigenous timber production, needs to become smarter, cheaper, faster. This is what the open-ground open day at Taupö Native Plant Nursery, on 7 June, is all about.

This is where the Sustainable Farming Fund open-ground trials, a Mahurangi initiative, is producing indigenous plants, forestry style. Restoration planting, on the scale needed for the clear water revival that the harbour deserves, demanded the Mahurangi think national in order to act local, effectively.

There are still seats available on the free bus that will return on Sunday via Jaap van Dorsser’s colossal riparian restoration project at Ngongotahā. Accommodation is available at Waitetï Trout Stream Holiday Park—for from as little as $18. 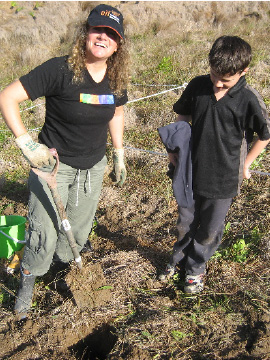 No Tree for This Hole: Regional councillor Christine Rose and nephew and their tree-planting hole that inadvertently exposed the extent of the tunnel erosion on the hillside behind Sullivans Bay. photographer Bevan Woodward

Just a note to say thanks for the very pleasant, and as you said, affirming, planting day at Sullivans Bay, Mahurangi.

It was great to be there, and to catch up in such pleasant surroundings for such a good cause—well worth the day out.

The Mahurangi Magazine coverage was great, and correctly captured the spirit of all there, me included.

PS Will get back to you regarding the Taupō Open-Ground Open Day.