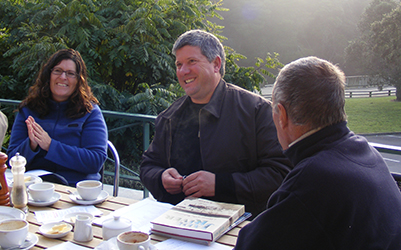 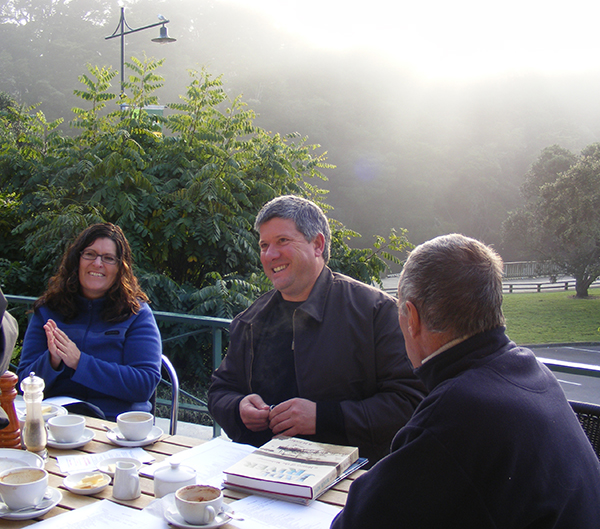 Braving the Mahurangi River Mist: Green candidate David Hay at the breakfast brainstorming at which it was insisted that representatives of other political parties also be permitted to attend. photographer Sarah Ransom

The convener thought it was only fair to say, when Lockwood Smith’s electorate agent phoned, that the forum was small beer indeed.

And that it would be entirely understood if the member of parliament’s priorities precluded his attending the weekly breakfast brainstorming. But in spite of this an email was received, confirming that the representative—for Rodney since 1996, and for the Kaipara electorate from 1984, opposition spokesman for immigration, for revenue and associate spokesman for finance—will be joining the breakfast beside the Mahurangi River on 20 June.

There had been no intention to hold meet the candidate breakfasts. But when the Green Party’s Rodney candidate offered to speak to Mahurangi Action about the Royal Commission on Auckland Governance, some of the breakfast club attendees, when giving the thumbs up the invitation to David Hay, had the proviso that the other candidates were also invited, on subsequent occasions. David Hay’s local government insights are very timely given the exploration of options post the five-year Mahurangi Action Plan.

The breakfast brainstorming—renamed from Mahurangi Breakfast Club, to help dispel any whiff of exclusivity—operates without ‘hats’, without rules but with a deal of civility and, mostly, with one speaker at a time. Most importantly, the discussion runs without a set agenda—there would be no point as it is not a decision-making body. Having said that, it is probably appropriate when hosting a special guest, that the rationale for the breakfast brainstorming be elucidated. This needn’t be a lengthy discourse, but given the high possibility that National Party candidates will form the next government, having the Rodney incumbent au fait with Mahurangi initiatives, is timely.

The Mahurangi Magazine refers to it as the Mahurangi initiative. It is the notion that there is broad agreement about what Mahurangi stakeholders want, and therefore no real impediment to that vision being realised:

There is less agreement over whether more people should live within the harbourscape:

With sufficient work, a consensus might be possible around this issue. The Rotorua Lakes A zone is an example of how development can be harnessed to improve both landscape and water quality—by mandatory restoration planting and low impact design.

All that remains is to convince local, regional and central government:

It may prove to be difficult to convince the multiple-layered government that there is a consensus; to date, it has been. At the Royal Commission on Auckland Governance hearing on May 14, commissioner David Shand asked of the editor: ‘You have said a lot about the regional council but very little about the district council, how responsive does your organisation find Rodney District Council?’

When we formed Friends of the Mahurangi in 1974, founding chairman—and ex-United Nations official—John Male’s dream was for a plan for the Mahurangi. We still don’t have a plan but the focus of the regional council in this last year of the five-year Mahurangi Action Plan is on a holistic community-led process, so we are now closer than we have ever been.The tapes are bound to have also recorded the odd um and ah, but this is close to verbatim!

Many assume that the district council has some dastardly plan for the Whangaparāoa-isation of the Mahurangi. It is true that the old Rodney County Council zoned a large part of Mahurangi West for open-slather development, in the early 1970s. That was replaced by a conservation zone in town planner John Cameron’s district plan, but not before the Bullock Track was developed.

And since then, there has not been so much as a whiff of a pro-development agenda from the district council planners. In fact, by the time of the Bullock Track was developed, the council was hosing down additional coastal development inclinations, on account of the spiralling servicing costs associated with the Ōmaha and Mahurangi Peninsula settlements. A plan is what the Mahurangi wants.

All that remains is for the stakeholders to commence with its drafting.