This Sunday it is Shelley Trotter’s turn to receive some help with her massive riparian retirement programme. 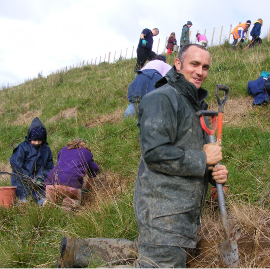 Far Upstream from the Park: Park ranger Matthew Williams, is keen to involve the community in the Mahurangi Regional Park, and vice versa. photographer Caitlin Owston-Doyle

The Edwards planting was particularly well organised, reflecting one very motivated property holder. Given the high failure rate of riparian planting programmes nationally, it is reassuring to sence that these plants are not going to be abandoned to the weeds nor the fencing be allowed to fall into disrepair.

At many plantings, there is an understandable reticence on the part of the organisers to be seen to be attempting to teach volunteers to suck eggs. But, given that the few minutes of the actual planting are the arguably the most important in a plant’s life, it is simply too important to be left to chance.

The planting started at the civilised hour of 1pm and finished not much after the advertised 3pm, (same, same for Shelley’s) just giving the planters time to climb back up the hill to the shelter of the Edwards’ woolshed before a bitterly cold driving rain swept across from the southwest—this Sunday afternoon looks as though it will be relatively benign, and could nicely coincide with a break in the rain bands. 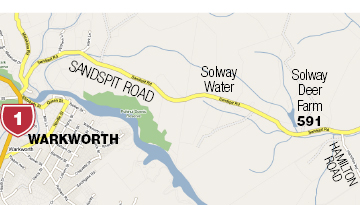 Blink and You Miss it: Although it will be sign-posted with a ‘Community Planting Day’ sign, Shelley Trotter’s driveway does creep up on you rather!

Cups of tea and barbecued sausages fortified the volunteers and the newly-formed three-member Mahurangi Rangers officiated with the presentation of several contributions from local businesses including from Ransom Wines.

This Sunday, the trees planted at Solway Deer Farm on will join 18‍ ‍000 Shelley Trotter has had planted, mostly since the Mahurangi Action Plan commenced.

The riparian planting on the property was started by Shelley’s parents, Maureen and Mike, while Shelley was still living at home.

Meantime, still on Shelley’s property but on the other side of Sandspit Road in the direction of Warkworth, is the open-ground trial site.

The plants look to be nicely established, with scant harm evident from the hammerings of two cyclones. It appears that rabbits and possibly pūkeko have done the only appreciable damage—koromiko seems to particularly appetising to the resident Oryctolagus cuniculus, and plucking root trainer plants clean out of the ground probably a pūkekian pecadillo.

So, after the barbecue, and so long as Tuesday’s rain doesn’t arrive early, those interested may also inspect the open-ground plants.