Action plan discussion back at the Old Masonic

It will be just one month shy of four years. 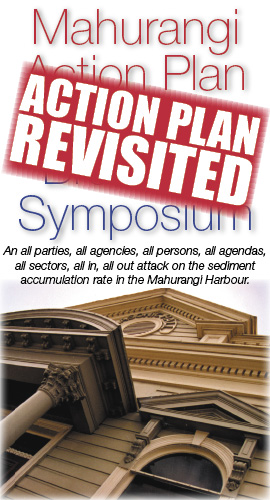 Scuttled Symposium: A previous attempt to discuss the Mahurangi Action Plan was doomed before it started—the indications for Monday’s gathering are very much more auspicious. photographer Lyn Bergquist

There was an intervening gathering, in February 2005, but with no regional council representation.

It wasn’t planned that way.

In fact the 2005 gathering was organised at the request of Stefan Seitzer, who was then the action plan’s project leader. The need for the gathering, Stefan had said, was to follow up the action plan launch, which Friends of the Mahurangi had also organised, at the 2005 Mahurangi Regatta Prize-Giving and Dance.

But then discussion of Mahurangi’s waters, figuratively, had become somewhat murky.

Ahead of the meeting, Stefan hand-picked a group as potential trustees for a discussion aimed at establishing a Mahurangi catchment trust, which his employer, the Auckland Regional Council, would supposedly contribute $15,000 annually towards administration costs. The purpose of the trust would be to pursue funding to continue the riparian protection work once the five-year action plan monies were spent.

However, the response of the potential trustees was unequivocal: It was not the regional council’s role to direct the community as to what structures should be established.

Oblivious, Stefan pushed on urging that the trust be established tout de suite, lest the first $15‍ ‍000 go unspent.

The response, best voiced by deer farmer Shelley Trotter was immediate and unanimous: ‘It’s a no-brainer, spend it on fencing materials—farmers will fence by torchlight if you give them the materials!’

The regional council shelved the proposal and, effectively, further discussion with the community.

And on eve of the Old Masonic Hall meeting that he had requested, Stefan announced that the community should meet free of regional council involvement.

But the damage, by dangling the annual administration funding carrot, had been done. The meeting was dominated by factions and individuals either seeking the funding or seeking to ensure that Friends of the Mahurangi—the sole catchment-centric organisation—didn’t receive it.

But it was not all bad; the breakfast served al fresco beside a misty Mahurangi River ahead of the meeting was entirely civilised.

None of the forgoing is to suggest that the failure of the regional council, until more recently, to discuss the Mahurangi Action Plan with the community was deliberate policy—staff members, from time to time, have alluded to the effects of council internal restructuring on management of the project.

And when Kim Morresey was appointed to replace Stefan Seitzer—after he resigned in 2007—Kim’s recent work with the establishment of the Waitakere Ranges Heritage Area was seen by the Mahurangi Magazine as strong confirmation that the regional council intended to engage the community.

Kim has proved to be a champion of community engagement—the informal no hats, no agendas Mahurangi Breakfast Club was spurred into existence by Kim’s enthusiasm for regular discussions.

So, while Monday might be only the second public discussion of the action plan with regional council participation, it promises to be a very significant milestone along the road to the clear water revival of the Mahurangi.