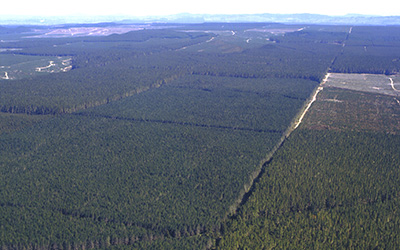 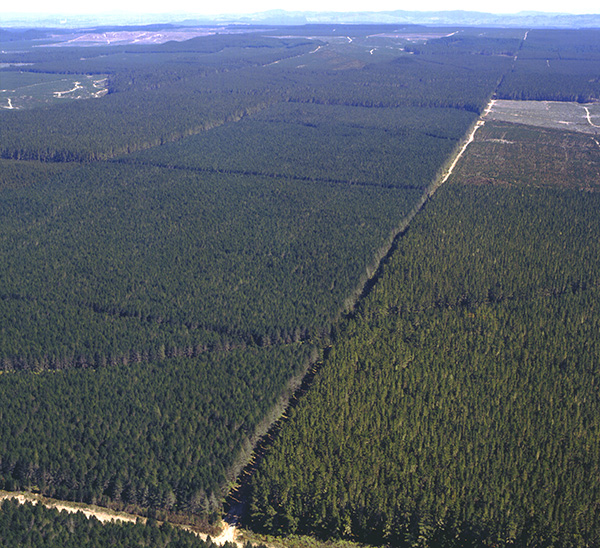 In February 2007, a $81.5 million fund was established to protect Lake Taupō.

The strategy was to head off the sort of degradation that Rotorua has been fighting at enormous expense for three decades, and will probably be fighting for at least another three.

The initiative is probably Aotearoa’s largest-ever catchment protection project, and its central objective is to reduce the amount of nitrogen that is leaching into the lake, by 20 percent—this is the aim of the Lake Taupō Protection Trust that is administering the massive fund.

The Mahurangi’s problem is not nitrogen pollution.

Instead, it is the elevated sediment accumulation rate that has the harbour so stressed—cockles no longer breeding, in the areas studied continuously since 1994, for example.

Although too much nitrogen or sediment constitute very different forms of pollution, both can be substantially addressed by the planting of millions of trees. Planting on the scale of the exotic forests begun by the State Forest Service ninety years ago would absolutely nail the nitrogen nuisance—the sort of infrastructure investment that is exactly appropriate in the face of a possible economic depression.

At the current price of plants, indigenous forest is vastly more expensive to establish than the rudely vigorous radiata pine—an area equivalent to the 164 300‍ ‍hectares planted by 1935 would cost about $6.6‍ ‍billion; or about $73‍ ‍billion to plant the equivilent of 2004’s 1.8‍ ‍million-hectare peak in exotic forestry.

To reduce the amount leaching into the lake, the trust is planning to buy nitrogen from Taupō catchment property holders. But it is also funding research into the means of reducing nitrogen contribution.

It was in this context that the chief executive of the Lake Taupō Protection Trust, Graeme Fleming, attended the open-ground indigenous plants open day, in June of this year. Raising plants by forestry methods, rather than retail nursery style, had obviously sounded like something that could make the crucial difference to property holders contemplating large planting programmes.

Discussion that commenced that day led to a formal application to the fund for $150 000 over three years to further the open-ground trials initiated in the Mahurangi.

On Thursday the trust advised that project has been funded—$50 000 for the first year, and subject to successful results, the following two years will be funded at the same rate.

The tangible output envisaged from the trials is scientifically verified data showing where, and to what degree, indigenous plants grown open-ground are more economic than those produced in containers. This means that Taupō Native Plant Nursery, for example, would be able to step up open-ground production, with the published science on hand to convince, particularly their big customers, to consider deploying open-ground plants.

The successful application was written by Dr David Bergin and Cimino Cole and lodged on behalf of Tāne’s Tree Trust—a national organisation with a vision for the majority of property holders to be successfully planting and sustainably managing indigenous trees for multiple uses by 2020.

Some are nervous of the trust’s emphasis on planting trees for timber production. Sometimes it is a sentiment similar that of Taupō’s fishermen who have historically opposed the commercialisation of trout—if you’re caught with a trout, and you don’t have a licence, guilty as charged!

But for others it is unconscionable to enjoy other people’s indigenous timber, for example for decking and patio furniture, but refuse to countenance sustainably-grown, continuous cover, tōtara being milled. Tāne’s Tree Trust envisions a future where so much of the land is again clothed in planted indigenous forest, timber can be milled with a clear conscience. There must be many, including the poor souls that have the misfortune of living in them, who are more than ready to see consigned to history the idiot days of spongy radiata pine and monolithic cladding houses.

And before writing off indigenous trees as too slow-growing to make-a-buck, how does eight years for saleable pūriri sound? Sure, they won’t be milled for timber at that age, or even used as fence posts, but sold as an established tree to graciously line a driveway they should fetch considerably more than does a 25-year-old pine tree. This opens up a self-funding route to establishing a national stock of mature indigenous timber trees. And once that stock of 60-year-old trees—for tōtara that age is probably optimal to produce millable timber—has been established, a whole raft of new sustainable industries is facilitated.

Lake Taupō might be a long way from the Mahurangi Harbour but the open-ground projects have long-term benefit for both heavenly bodies of water.