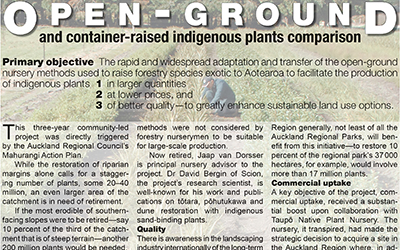 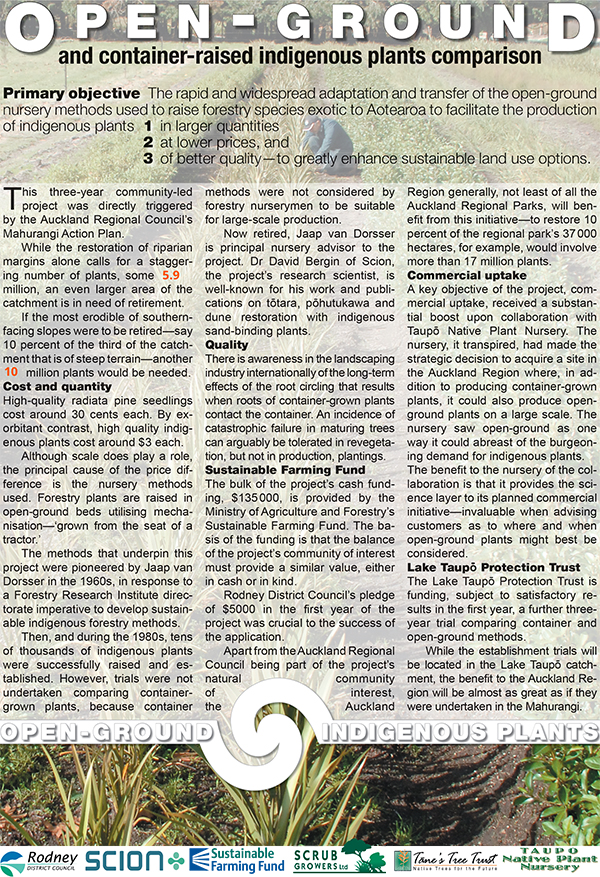 Less is More: The one-pager outlining the need for forestry-style nursery methods as one of the means of making it possible to plant more land, more economically.

Kim Morresey suggested a one-pager might be useful. Having attended the open-ground open day in Taupō, Ms Morresey, project leader of the Mahurangi Action Plan, was acutely aware that the concept of raising plants other than in containers is far from intuitive.

Primary objective The rapid and widespread adaptation and transfer of the open-ground nursery methods used to raise forestry species exotic to Aotearoa to facilitate the production of indigenous plants:

Cost and quantity High-quality radiata pine seedlings cost around 30 cents each. By exorbitant contrast, high quality indigenous plants cost more than $3 each. Although scale does play a role, the principal cause of the price difference is the nursery methods used. Forestry plants are raised in open-ground beds utilising mechanisation—grown from the tractor seat.

The methods that underpin this project were pioneered by Jaap van Dorsser in the 1960s, in response to a Forestry Research Institute directorate imperative to develop sustainable indigenous forestry methods. Then, and during the 1980s, tens of thousands of indigenous plants were successfully raised and established. However, trials were not undertaken comparing container-grown plants, because container methods were not considered by forestry nurserymen to be suitable for large-scale production.

Now retired, Jaap van Dorsser is principal nursery advisor to the project. Dr David Bergin of Scion, the project’s research scientist, is well-known for his work with tōtara, pōhutukawa and on dune restoration, with indigenous sand-binding plants.

Quality There is awareness in the landscaping industry internationally of the long-term effects of the root circling that results when roots of container-grown plants contact the container. An incidence of catastrophic failure in maturing trees can arguably be tolerated in revegetation, but not in production, plantings.

Commercial uptake A key objective of the project, commercial uptake, received a substantial boost upon collaboration with Taupō Native Plant Nursery. The nursery, it transpired, had made the strategic decision to acquire a site in the Auckland Region where, in addition to producing container-grown plants, it could also produce open-ground plants on a large scale. The nursery saw open-ground as one way it could abreast of the burgeoning demand for indigenous plants.

The benefit to the nursery of the collaboration is that it provides the science layer to its planned commercial initiative—invaluable when advising customers as to where and when open-ground plants might best be considered.

The project manager is Tāne’s Tree Trust, on account of its national focus and standing. The key project personnel remain the same as for this project.