A long way in thirty-five years

A water right application in 1974 served as the rallying call. 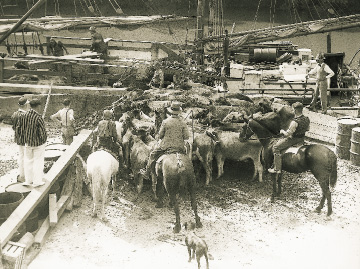 From Cattle to Kids: This year the Jane Gifford, instead of carting cattle downriver, will commence carrying children curious about why our wastewater is wasted in the river—an environmental-savvy generation that won’t easily be deflected. photographer Tudor Collins upcoming publication Changing Times

It precipitated the formation of Friends of the Mahurangi, on 17 December that year. And that its inaugural meeting was held barely a week before Christmas gives a fair indication as to how het up the community had become with the former Warkworth Town Council’s plans for wastewater disposal.

The name ‘Friends of the Mahurangi’ was proffered by Wilfred Allen.

Wilfred was widely known as WJD Allen, the style in which he wrote letters to the editor of the Rodney and Waitematā Times. These letters, throughout the 1970s, were invariably treatises on wastewater treatment in general and the inadequacies of town’s proposals in particular, published unabridged.

Many of the early executive meetings were held in Wilf’s residence, in Wech Drive. A laboratory-style spigot over his kitchen sink was a reminder of Wilf’s other life as the fastidious operator of the town’s water treatment plant.

Although the water right application was strictly about the discharge into the Mahurangi River, just below the town, the objectors convinced the 1975 special tribunal hearing that a broader, more strategic view should be taken.

Consequently, the tribunal’s recommendation was for a combined scheme with Snells Beach and Algies Bay, and a single outfall outside the harbour.

The oyster farmers, in particular, breathed a sigh of relief, and felt their top-flight legal representation—Ian Cowper, an Environmental Defence Society founding director—had been well worth the expense.

Incredibly, both town and county councils spurned the tribunal’s recommendation and persisted with separate, and ultimately expensive separate schemes. Thus the Mahurangi River was locked into the role described by the town’s engineering consultants as the ‘buffer zone’—between the discharge and oyster farms nine kilometres downstream.

In almost no respect should the 2009 discussion of long-term wastewater strategy options resemble that of 1974.

For a start, Monday 16 March 2009 will be a discussion. In 1974 there was no discussion with either council—engineers knew best, councils employed the engineers, therefore councils knew best—no discussion necessary.

The 16 March Mahurangi Initiative forum has been triggered by the imminent completion of a report by Harrison Grierson Consultants commissioned by Rodney District Council. Prior the establishment of the forum, the evening would simply have been labelled a wastewater discussion and would probably been held in the same venue and the same time. And a number of the same people would have attended.

However, there will be some important differences. One is that an elevated interest in wastewater would have defined the attendees, whereas the forum will likely attract a more representative gathering—and consequently be more valuable to the council, which needs to ultimately develop a strategy that has demonstrable support from stakeholders.

This demonstrates one of the two main strengths of the Mahurangi Initiative concept: It is concerned with, but not defined by, the harbour’s elevated sediment accumulation rate. In the space of four weeks, the forum will have focused on two issues that have almost no overlap, but nevertheless are key issues for the catchment.

(Incidentally, the second major strength of the concept is that the Mahurangi Initiative is a network, not a group—if it were a group, regardless of how representative it might strive to be, it could not adequately satisfy the council’s need to consult with all stakeholders.)

Four years to the day

It would be a fair summation that the delegation was hoping to hasten the demise of the discharge of wastewater effluent into the Mahurangi River.

That was long before the revival of the Jane Gifford was a glimmer in Hugh Gladwell’s eye.

Regardless of the long-term wastewater strategy developed, the Jane Gifford will provide a mammoth platform from which to explain the scheme to shipload after shipload of school children. Warkworth’s wastewater treatment arrangements will either make the town proud and its visitor’s very impressed or, if that strategy is found wanting, the council humiliated and permanently deluged with petulant letters detailing the students’ disgust at short-sighted mean-minded despoilers of the Mahurangi River.

But that is not going to happen, not a second time.