From the ridiculous to the sublime 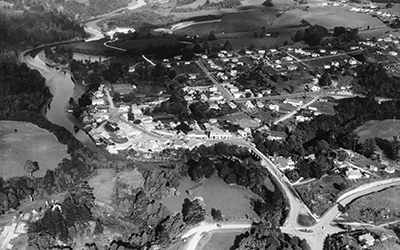 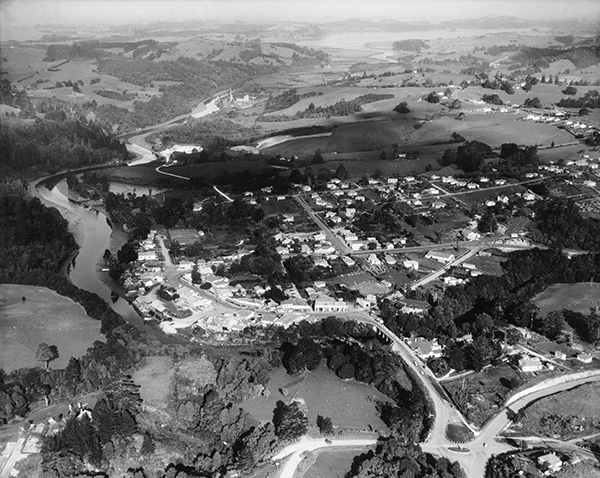 Duck’s-Eye View of Café: This 1955 aerial of Warkworth and the Mahurangi River includes the site of Riverview Café, formerly Ducks Crossing Café, when the diary factory on which the present Riverview Plaza was styled was extant. photograph Whites Aviation Publication Changing Times

So much progress is being achieved towards sustainability.

Beginning with the international stage, just over a year ago when it dawned that Barack Obama was on the road to making Earth-repairing history, the editor was determined to fully enjoy the phenomenon—sublime!

On Thursday, President Obama’s special envoy on climate change, Todd Stern, will be a keynote speaker at a Capitol building symposium on climate action initiated by bipartisan senators, for senators. This all bodes extremely well for December’s United Nations Climate Change Conference, in Copenhagen.

And the absurd Bush junior, now but a dim memory.

In Aotearoa, just as in the United States, the strong signs of change are largely obscured by the heavy financial weather, but they are there.

The best idea put to Prime Minister John Key’s Job Summit was put by Key himself. The tyranny of distance means that if we are to encourage tourists to burn huge amounts of kerosene flying to the antipodes, it behoves us to build the infrastructure that will engross them a month or more in green activities. A national cycleway where folk leisurely imbibe all things Aotearoa is far more sustainable than the current quick thrill bungee jumping–jet boating emphasis. And, a crucial test, it also provides accessible and affordable and recreation opportunities for locals. Creating two classes of people, visitors and residents, has been a recipe that has seen a sickening number of predations, almost exclusively at the visitors’ expense.

While on the tyranny of distance theme, the Commerce Commission’s conference on broadband reaffirmed the government’s $1.5‍ ‍billion commitment to building data infrastructure. This will be the single biggest factor in reducing the frequency we need to climb into a car or aeroplane for our work, or pleasure. It will even reduce those one-way flights to Australia.

Favourable winds of change reached our harbour in 2004, in the form of the Auckland Regional Council’s five-year Mahurangi Action Plan.

But the Mahurangi has not been left wallowing, with the work required to reduce the sediment accumulation rate incomplete. On 17 February, the regional council’s environment committee voted to ‘stay in the Mahurangi’, for a further period, of 10 years.

And now the Mahurangi Action Plan will truly be a plan—the first year is being devoted to collaboratively developing a strategic plan for the catchment.

Collaboratively, means all stakeholders. This is an extremely important and means, for example, that changes to the district plan can be considered. Currently the district plan is agnostic in respect to the Mahurangi’s particular crisis—the sedimentation science had not been published when the plan was being drafted, over 10 years ago. With a bit of tweaking, some of the cost of reducing sedimentation can be borne by the creators of ‘bush blocks’—except the emphasis would not solely be on protecting two-hectare patches of forest or wetland.

Collaboratively also means that all Mahurangi projects can be considered, whether they are primarily about sediment or not.

Take the Warkworth–Snells Beach Walkway concept. This will expose much more or the Mahurangi River to public view. It will result in a viable ferry service—weather, capabilities or inclination will often rule out walking or cycling in one or other, or both, directions.

This is the Mahurangi Initiative concept.

The Friday Mahurangi brainstorming breakfasts are totally informal, leave-your-hats-at-the-door non decision-making discussions, where the only ‘rule’ is one conversation at a time.