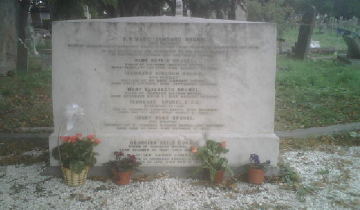 But a Modest Monument: Mahurangi son says Brunel’s Paddington Station is nothing short of a cathedral. photographer Rod Webber

I believe I may be one of Mr I K Brunel’s biggest groupies.

I’ve done them all, the railway, the ship, the office, the grave. He’s the greatest of the greats.

I happen to travel Brunel’s line to Cardiff once a week for work and we’ve just had a holiday in Cornwall and travelled over his masterpiece coastal line—dear god I sound like a train spotter!

Alighting in the evening in the monumental Paddington Station is one of life’s most sensual experiences. It’s nothing short of a cathedral.

To put it into perspective, while we were putting one over Māori in 1840, Isambard was building Paddington and the Great Western Railway. The guy was beyond a genius. He died minutes after that favourite picture of Sarah’s and was buried in the grave as per the attached pic. Oddly, he was effectively broke when he died, hence the understated gravestone. It took me ages to find it.

Brunel lost everything on the SS Great Eastern. She later laid the first [successful] Atlantic cable, revolutionising communication. We went to the spot the cable was landed in Cornwall a few weeks ago.

I visited the Great Britain last year in Bristol. Not only did he build the first iron-hulled ship, but it was insanely larger than anything ever dreamed of, it was powered by steam rather than sail and he was the first guy to install a prop on a ship rather than a wheel. That’s visionary.

I’m not sure he’s your man for wastewater treatment though.

This your guy [who was championed by Brunel]: Joseph Bazalgette.

He’s one of the greats as well. His sewer was so magnificent it is still the backbone of wastewater drainage in central London today. Pretty good effort!

I love these guys.

Regarding the legal distinction that property is held, rather than owned, Rod contributed to the resolution of the Jamieson Bay public foreshore access issue by loaning the editor his copy of Butterworth’s Land Law in New Zealand, with the advice that a sound understanding of rights of way was imperative, and that he would find the history of land law ‘fascinating’.

Bang on the money, on both counts!