Mahurangi West Hall meeting to get behind the seawall 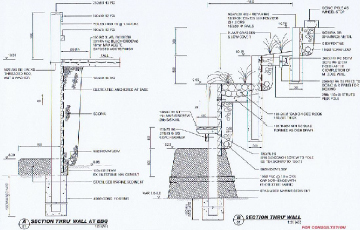 Designed to Last: Sections A and B through the proposed seawall, which should last many times longer than the self-help effort it is set to replace. design Davis Coastal Consultants

Craig Davis is a rare breed of coastal engineer.

One that is passionate about resisting the human instinct to armour the coastline with manmade structures.

But if a seawall is needed, Mr Davis can be relied upon to design one that does not offend nature. Seawalls are expensive solutions best avoided by providing sensible setbacks, which allows nature to takes its course—carving away coastline here, and building it back there.

In 1957, when Jamieson Bay subdivision was devised, the wisdom of building well back from the tide line was yet to be learned. Complicating the picture was the extant house that Govan Jamieson had built on the small pocket of flat land, close to the shoreline. Water access was crucial—there were no roads then of course.

Despite it then being quite derelict, the building was allowed to dictate the shoreward boundary of the lot closest to the sea, causing the esplanade reserve to narrow at that point.

Time and tide took its toll on the foreshore, leading to a seawall being built by volunteer labour and scrounged materials, but not exactly built to last.

With the partially failed wall temporarily stabilised, the already narrowed esplanade reserve is a constraining factor. The alternatives therefore are:

Sadly, if it hadn’t been for the parsimony of the Crown in 1957, the centre of the bay would have been public open space, which would have allowed the foreshore to remain natural. Instead, the Crown decided that the (compromised) esplanade reserve was adequate and took the reserve contribution in the form of two titles, which it subsequently cashed up.

A public meeting is being held at the Mahurangi West Hall on Friday 22 May 2009. Mr Davis explains:

Given we are largely replacing the existing wall and have had positive feedback from all parties to date, we are not expecting the proposals to be controversial or have more than minor impact.

We are, however, aware of the history of misunderstandings in Jamieson Bay and so want everybody to be informed, before finalising plans and applying for resource consent.

It would obviously be advantageous and cheaper for the council, and thus the community’s rates, if the project has full community support and can be processed on a non-notified basis.

An additional incentive to finalise plans promptly: The need to have this work completed before the disruption that will inevitably manifest as Rodney District Council transitions to Auckland Council.