by Cimino26 May 2009Establishment trials0 comments 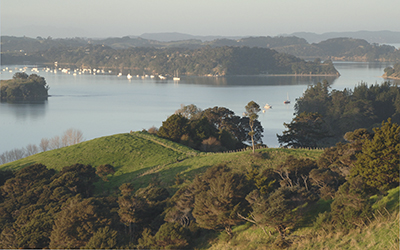 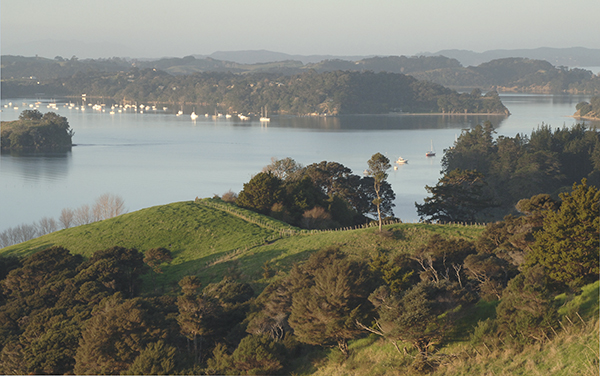 Future Lookout Outlook: The view, more or less, from a possible new lookout at 443 Mahurangi West Road, site of the trial planting—of plants selected so as to not obscure the view! photographer Jonathan Barran

To be precise, some were not so much measured, as their death or absence noted. Even so, research technician Michael Bergin took more than 18 000 measurements, the cack-handed editor’s age-slowed fingers hard-pressed recording at rates of up to three digits per second. Small price to pay for playing a small part in writing the science—the first time in Aotearoa that the establishment rates of open-ground and container-grown indigenous plants have been systematically compared.

Readers may wonder at the wisdom of painstakingly measuring trees when the same resources could be more productively used planting more of ’em.

If the most erosion-prone percentage the catchment—say 5%—could be planted in a few years, or even decades, then this trial might be seen as extravagant. But the scale of the planting required is immense, in the order of 10‍ ‍million plants.

At radiata pine prices, the seedlings would cost $2.5‍ ‍million, but at indigenous plant prices the plants would cost $33.5‍ ‍million—arguably academic, even if the work was phased over six decades.

Sixty years is Mahurangi son Mike Vine’s estimate of how long it will ultimately take to repair the Rotorua Lakes, a cause to which he devoted years—first as a soil conservator, later as a resource planner. Mike said at the beginning of the five-year Mahurangi Action Plan, when extolling Mahurangi Actionestablished 1974 as Friends of the Mahurangi to take a long-term view:

It’s taken thirty years to date, and realistically it will take another thirty.

The first initiative to raise indigenous plants on a forestry scale was in the late 1950s—Forest Research Institute nurseryman Jaap van Dorsser supervised the work.

At the time, there was no attempt to compare open-ground methods with container grown—the fashion for container methods had yet to spread from the United States, and had they been available, no forester would have considered containers for a moment.

But instead of a latter-day Indigenous Forest Service springing into existence, which would have nicely set up Aotearoa to meet its current carbon emission obligations, the respective ideologies of successive governments allowed the developmental work done raising indigenous plants forestry-style to lapse.

The trials, which are located at Sandspit Road and at Silverdale, are producing entirely encouraging results.

The main surprise is the poor survival rate of the root trainer plants, compared with open-ground plants, currently costing about the same to produce.

In one obvious respect, this is decidedly counter-intuitive. When open-ground plants are ‘lifted’, all soil is left behind in the (open-ground) beds—the plants being bare-rooted. However, the transplantation shock experienced by the open-ground plants seems to be less of a liability than is the lack of stature of the root trainer plants—these much smaller plants succumbing to pūkeko, rabbits and smothering grasses.

Meantime, the comparison with the pot/planter bag plants and open-ground is much closer, the plants after nearly a year since leaving the nursery are quite similar in size. And while there have been fewer losses from the pot or planter bag (PB3-sized) plants, the open-ground plants at half the price are looking to be considerably better value.

While the case for open-ground methods has been considerably advanced by this trial, it is only by repeating trials over a number of years that the results will be robust. Hence this year’s trials, at Goodall Reserve and 443 Mahurangi West Road, and at Taupō. Similar trials will be established except that this time two sizes of root trainer plants will be used. The first year involved the Hillson Rootrainer, which being appreciably smaller than the Tinus product may not be a fair representation.

Volunteers at these plantings will hopefully have the opportunity to meet the project scientist, Dr David Bergin. David is very personable and likes nothing better than to explain the science, and to listen to the concepts and theories of enthusiastic amateurs.

Besides, that is exactly how this pivotal project, which David rates as one of the most important of his career, began.

Footnote It is entirely typical of the Bergin family that Michael kindly drove to Mahurangi from his home in Rotorua two days early to help out with the burger production for the Jane Gifford re-launch celebrations!