Putting the plan in the Mahurangi Action Plan: Planting and planning 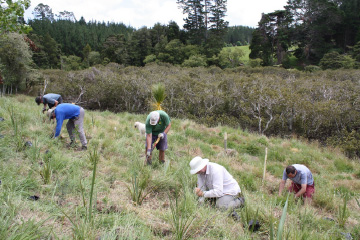 Harakeke Filler Trials: Harakeke, which potentially can be produced with the economy of radiata pine seedlings, being planted in a checkerboard with other species. photographer Dr David Bergin

When the Mahurangi Action Plan was initiated, in 2004, it wasn’t so much a plan as a commitment to riparian fencing and planting.

A limitation of that approach was illustrated after a Hepburn Creek resident blew the whistle on the trashing of the freshwater reach immediately above the tide head—rapturous beef cattle playing at being water buffalo.

The stream runs along one edge of a narrow panhandle of the property that is mostly steep and was largely gorse and mānuka covered.

When alerted to the damage, landowner Telecom New Zealand quickly determined that the residual pasture, was the stream to be fenced off, would not be ‘worth the candle’—better to retire the panhandle in its entirety.

The regional council representative took a power of persuading, then promptly refocused on riparian fencing farther upstream—this was shaping up to be a serious soil conservation project.

But the representative’s generosity wasn’t shared back at Pitt Street—his managers fearing a ratepayer backlash if seen to be subsidising work on a multinational-owned property.

So while the headwaters of Hepburn Creek wait for a fresh initiative, a deal of fencing and planting has, and is, occurring in this neck of the woods. This time last year volunteers, organised by the regional council, planted on Mike Edwards’ farm.

Mike Edwards truly has the bit between his teeth and has planted some 25 000 indigenous trees over the last few years. Next Friday and Saturday, the regional council is organising help for Mike to plant a further 2000.

For those who can help, rest assured that Francesca Jones, regional council’s Mahurangi Action Plan community education person, believes in looking after the workers—Friday’s planting is being catered for by the Snells Beach School Parent–Teacher Association.

Meantime, those lucky enough to be able to plant on Saturday can anticipate the now legendary Warkworth Scouts’ catering. And not only is the catering impressive—the editor chose the seafood chowder and warm bread rolls—the scouts, scouters and parents make up a major part of the planting team.

All this of course isn’t helpful in persuading volunteers, who have the option, to consider coming on the Friday, when numbers are expected to be lighter, rather than the Saturday.

Those who planted last year may also take the opportunity to inspect the rates of growth at the previous year’s planting site. Or visit the harakeke–toetoe filler planting trials bordering the estuarine shoreline of Hepburn Creek.

On the Monday after the planting, the planning part of the Mahurangi Action Plan is due to start in earnest—monthly after-work workshops are scheduled to be held on the first Monday of the month for a year.

Exceptions to first Mondays of the month are:

The concept is for the workshops to allow everybody wishing to be involved to play a part in collaboratively developing a plan for the Mahurangi—with particular focus on the next ten years during which the regional council advocates the current regional funding should extend.