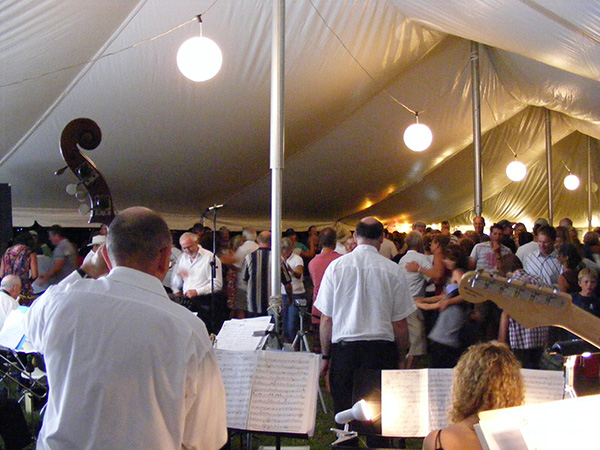 Golden Opportunity: Why not piggy-back that wedding, anniversary, etcetera on the regatta prize-giving dance?—the Sunday and Monday of the long weekend are free. And the incomparably good and criminally affordable Prohibition Big Band might even be persuaded to play both gigs. photographer Jason Brown Mahurangi Regatta Prize-Giving Dance 2009

Weddings weren’t expected to be the subject of a Mahurangi Action Plan workshop.

Nor did the Mahurangi Magazine expect to be posting wedding banns anytime soon. Nevertheless, the prospect of reversing the rule that effectively disallows the likes of weddings at Scotts Landing enjoyed the fleeting focus of one of the 10 August Mahurangi Action Plan working parties. Regional councillor Christine Rose noted that the Auckland Regional Parks Management Plan is being reviewed—a draft document is to be released for public comment mid-October.

Of course the purpose of the Mahurangi Magazine posting banns won’t be the thwarting of potential polygamists, but to announce to park users that the Scott Homestead area will be shared that day, as it performs one of its key heritage functions. And to warn away the odd misanthrope, who might otherwise stumble upon a wedding party pleasantly imbibing the 1800s ambience of the unique location.

The historic use of Scotts Landing for weddings is well documented, and marquee-based events, invariably weddings, enjoyed a surge of popularity around the turn of the millennium. Then in 2003, with no consultation with the community, the use of the Scott Homestead area was restricted to parties of 30 or fewer people. In ignorance of the change in park policy, planning for the Mahurangi Regatta Ball had long been underway, However, the head ranger of the northern regional parks readily recognised the event’s significance, as the grand finale of Warkworth’s 50th celebrations, 2003–04, and helped process the required consent.

The scale of the Mahurangi Regatta Ball suggested a departure from the site that was then being used for marquees—the area immediately to the north of the homestead. Because of the contemporary picket fence, this required marquees to be in close proximity to the vulnerable wooden homestead. Local marquee erector, Steven Slaughter, recommended that the regatta ball marquee, and marquees generally, should be erected to the south of the homestead outside the fenced area, where there was ample space for a marquee to seat the 500 guests being planned for.

The site proved to perfect for the regatta ball, and for the lower-key Mahurangi Regatta Prize-Giving Dance that has been held there each year since. In supporting the revival of the traditional regatta prize-giving and dance, parks management has shown itself to be commendably flexible. Similar responsiveness allowed a small marquee to be erected beside the homestead for Peter Oxborough’s funeral—the artist, despite living only the latter part of his colourful life beside the harbour, had become a legendary Mahurangi personality.

The curtailment of marquee-based events has created considerable resentment, particular in families with connections to the Mahurangi that unsuccessfully sought to hold weddings there. But there were legitimate concerns about the impacts that such events were having on the Scotts Landing community, on other landing and park users, and on the homestead. A number of measures that could be employed to ensure that marquee-based events would not impose unreasonably:

The suggested additions to the infrastructure, and spreading of marquee costs over several events would also make the regatta prize-giving and dance that much more sustainable.

Regarding the need for toilets: At present park users have to walk to the Rodney District Council toilets on the landing. While the walking is no bad thing, the landing is at times heavily congested with vehicles, often involving the reversing of boat trailers. This latter activity is particularly hazardous for young, unaccompanied children.

Postscript Steven Slaughter, after erecting marquees for numerous weddings, was denied the opportunity of having his own at Scotts Landing, on account of the policy change. To add insult to injury, he was then obliged to continue erecting marquees for other people’s weddings, previously booked. An unusually generous and constructive soul, he and David Herbison erected the Mahurangi Regatta Ball marquee free of charge, and former Auckland City councillor Jon Olsen weighed in, swinging the maul with accomplished precision.