No room for global warming elephant in the harbour 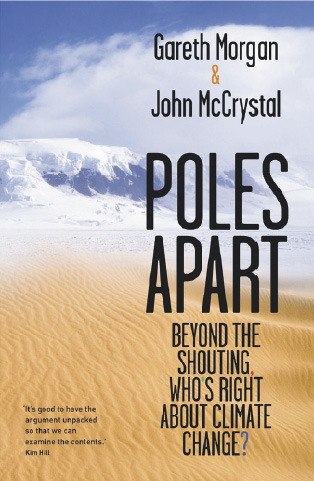 Non-Preachy to the Non-Converted: Morgan and McCrystal have a ball and help save the planet. publisher Random House 2009

Work is proceeding apace on the first-ever collaborative Mahurangi plan.

The decision to embrace the production of a holistic plan did not come quickly or easy for the Auckland Regional Council. Having discovered, somewhat inadvertently, that the harbour was in dire straights due to its elevated sediment accumulation rate, the council was emphatic that there was no time to lose in fencing farm animals out of streams, and planting the areas retired with indigenous species.

During the course of its five-year programme of riparian retirement, the regional council developed a close working relationship with local groups and in the process learned that potential synergies abounded with many local projects aligning nicely with the overall goal of stream and soil conservation.

The Jane Gifford is a powerful example. The goal of her revival was always broader than solely maritime heritage considerations. Peter Thompson saw her as a way to champion the revival of the river—to see the river dredged to restore its historic navigability. Meantime Peter’s co-conspirator, Hugh Gladwell, saw a broader environmental education roll for the re-built scow, as an antipodean Clearwater. By spending her weekdays as a floating classroom, the Jane Gifford will provide an incomparable opportunity to focus attention on the state of the Mahurangi catchment and the work required to protect and restore it.

But as important as its adherents feel it is for the Mahurangi to be looked after, the likes of the legendary James Lovelock would laugh at the notion such local green actions were remotely relevant, so convinced is he that the planet is toast. And while James Lovelock can’t know with absolute certainty what global warming will wreak by 2100, he warns that 80% of humanity will perish and that change climate will prevail for 100‍ ‍000 years.

Meanwhile, when advising the prime minister on anthropogenic global warming, Professor Sir Peter Gluckman cites the ‘tragic results in some African countries’ of the denialism that the science surrounding AIDS encountered.

There is no consensus as to how imminent the threat of inundation is for the world’s populous delta communities, the Pacific’s atoll dwellers or the dozen properties in Ōpahi at sea level. Likewise there is no long-term plan for phasing out the sea-level settlements of Ōrewa or Ōmaha. It is currently unknown whether the eventual anthropogenic sea-level rise will be closer to 0.7 or 70‍ ‍metres, or over what timescale, but the cost ignoring the reality inundation is likely to be ruinous.

Having the Mahurangi Action Plan address the elephant in the room that is anthropogenic global warming should not be beyond the collective wit of the collaborators. Some land currently in pasture is decidedly uneconomic. More trees means more carbon dioxide sequestered and less energy-trapping methane emitted. It also means less soil washing less vigorously into the harbour—save the planet and the Mahurangi!

Sir Peter is advising that Aotearoa’s response should be science-informed, strategic and collaborative—an applicable mantra for those drafting the Mahurangi Action Plan.

Postscript Gareth Morgan and John McCrystal’s Poles Apart is the reward for those who, perhaps for entirely healthy reasons, have avoided so far wading into an entire book on the subject of anthropogenic global warming. It is engagingly and whimsically written, and highly informative. Its wittiness and language—its use of the terms Alarmist and Sceptic to describe global warming camps—may rankle with sensitive readers, but in an entirely non-preachy manner it preaches to the unconverted, and for that Morgan deserves to perpetually ride into the perfect sunset: