Marine farming the nasty way or the nice way 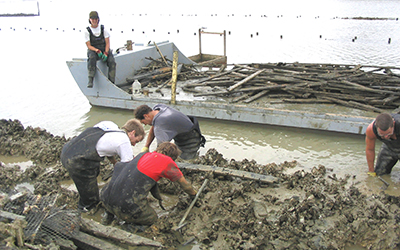 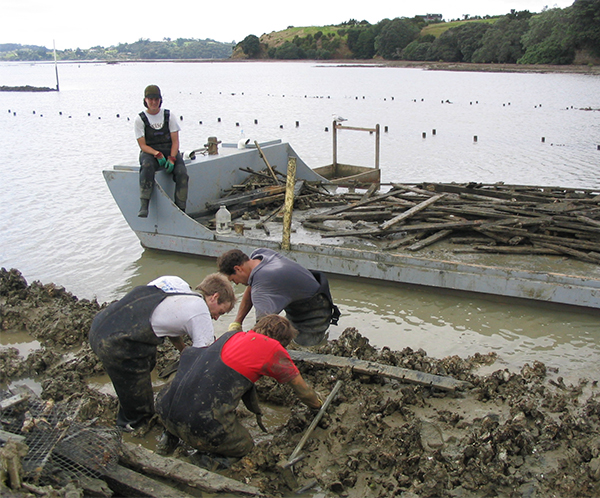 Too Much for Mere Men: This working bee to clean up a derelict neighbouring lease helped convince the oyster farmers involved that the job is too big for manual methods. photographer Jim Dollimore

Biomarine, for its vast new Kaipara harbour farm, has chosen to eschew poisons such as chromium arsenates. Instead of pressure treated timber, the 52 000 lineal metres of post involved in Biomarine’s new farm will be of a composite material manufactured from recycled plastic and wood.

The posts and tees themselves are indicative of a thoroughly new way of growing oysters from that which has been the norm in the Mahurangi, since circa 1968.

The ‘traditional’ method typically calls for racks consisting of twin rows of posts and rails across which the oyster supporting sticks are laid and secured. An appreciable number of oysters fail to retain their grip on their sticks and fall into the bottom, which is generally soft mud. Additionally oysters self-seed onto the post and rails of the racks, from where they need to be laboriously removed but a percentage also end up in the mud.

Diligent farmers regularly retrieve and dispose of the oysters and associated debris from the bottom.

Uncaring or overwhelmed farmers don’t, and the result is an eyesore and desperately unwelcome, localised, contribution to the harbour’s elevated sediment accumulation rate. And the mounds of oyster material don’t go away. New oysters self-seed onto the dead and dying in the mud and inexorably grow the problem, along with other marine growth. The problem is on such a scale that only by utilising mechanised dredging methods can these derelict areas be restored.

Dredging is the easy part. The more difficult, and potentially extremely expensive part is disposal of the dredged material. Currently the best hope for a dredging solution is in concert with aspirations to dredge the navigation channel of the Mahurangi River, both of which need a nearby deposition site. Ludicrously, the regulatory-acceptable option is to burn diesel fuel to tow barges out abreast with Cuvier Island and to dump the mud and debris there, choking marine life in the process. 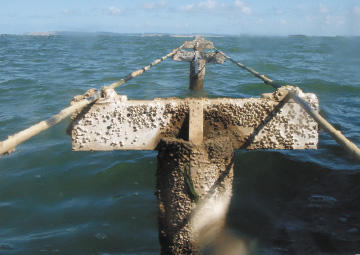 Clean New Lines: Biomarine’s solution for its new farm in the vast Kaipara Harbour minimises the visual impact by having rows of single posts, rather than rows of four. photographer Dan Dollimore

For its 76-hectare Kaipara farm, Biomarine has decided to depart from the stick and rack approach and exclusively use the bag and wire method, which it has been trialling in the Mahurangi.

This is where the plastic composite posts and tees come in. The tees atop the single rows of posts support a pair of tensioned wires from which baskets of oysters hang. This allows the oysters, unconstrained by their neighbours, to grow into an optimal and attractive shape. It also means that an oyster that can fetch ¥100 in Tokyo, doesn’t end up suffocated on the harbour floor.

While forestry is unarguably what the world needs much more of, untreated radiata pine is the equivalent of junk food for marine worms such as teredo—pine posts, untreated, last less than a year until riddled, typically just above mud level.

To survive more than a few years, softwood posts need to be chemically treated, and to the highest hazard level: H6. The amount of copper, chromium and arsenic impregnated when timber is ‘tanalised’ is considerable, as is reflected in the weight and colour of the treated wood.

Presumably because of the slow rate of leaching and the massive dilution involved, even rigorous testing has failed to show any appreciable trace of the treatment chemicals in the meat of farmed oyster.

Be that as it may, many countries are taking the precautionary approach—the use of copper–chromium–arsenic -treated wood in residential and recreational settings has been banned in the United States, Canada and the European Union since 2004.

The replacement product that Biomarine has settled on is manufactured in Australia by Advanced Plastic Recycling. While the company was already producing posts for oyster farmers, the high-energy Kaipara environment called for a new product. 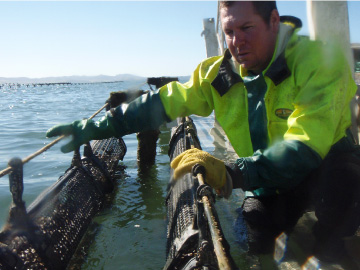 Safe From the Mud: The baskets on wire system, which was initially trialled in the Mahurangi. The method ensures that every valuable oyster is safe from a muddy fate on the harbour floor. photographer Dan Dollimore

The new posts are of a square tube section that presents greater lateral resistance and provides a larger cavity to enable filling with reinforced concrete, once jetted into position.

In addition to developing a more robust post, Biomarine worked with the manufacturer to improve the consistency and sheer-strength of the composite material.

It is to be hoped that a manufacturer this side of the Tasman will respond and begin converting the accumulating mountains of used plastic to a similar product.

Not only is the company passionate the sustainability, it is an excellent and long-term ally in the efforts to improve the indifferent water quality in the Mahurangi—one of the reasons Biomarine needed to establish its new farm in deep water, in the Kaipara Harbour.

And there is a simple way of supporting Biomarine…
…ask for its excellent oysters.