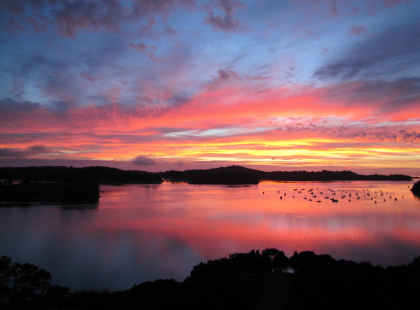 Mahurangi Morning: Red sky belies the dawning of yet another day without the rain much-need by parched pasture. photographer Mike Neil

The best has been left till last:

Landscape is the Mahurangi’s greatest asset. Not only is it a harbourscape of outstanding natural beauty, Mahurangi is unique in having an emphatically rural landscape, in spite of being the first natural harbour north of the metropolis.

Monday’s workshop, the final in the Mahurangi Action Plan series, finally addresses landscape—possibly ending where the workshops should have started.

Of course it is the water, particularly the navigable water, that makes a harbour. And it was the science pointing to an elevated sediment accumulation rate that spurred the regional council into practical action, and subsequently to hold the action planning workshops.

Certainly, by addressing other issues first, the discussion of landscape will be better informed. There are, for example, sediment generation reduction reasons for gullies to be clothed in indigenous forest, in addition to the visual–aesthetic benefit.

But Monday’s workshop won’t only address landscape. It will also attempt to review 143 aims, objects and actions, and to identify and prioritise the top twenty actions—from a list of 86.

If these two tasks were determined definitively, they would represent an impossibly tall order from a two-hour meeting. Which raises the question as to how the completed Mahurangi Action Plan should be considered:

Although the Mahurangi Action Plan workshops have received some publicity and a fair degree of buy-in, it is reasonable to expect that the plan will only start to attract mainstream attention after it is launched. That suggests that it should be pitched as the best effort of the councils and community to date, but very much as the beginning of the process of developing a robust consensus about the future of the Mahurangi.

Even if the plan is pitched as a starting point, it is imperative that it is a turn-on, not a turn-off. The draft landscape aim, for example, is lamentably inadequate:

This, as an aim for what folk viewing it for the first time so often describe as Auckland’s best kept secret!