Mahurangi landscape and the matrix 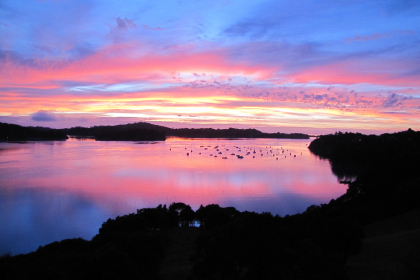 Still in the Dark: Use of an image of an unlit landscape prior to the 29 March 2010 workshop proved to be prophetic—but landscape will finally be discussed on 3 May. photographer Mike Neil

The best is still left till last.

But landscape was almost left off entirely, as a separate workshop topic—bumped by regional council enthusiasm to introduce a matrix method of determining which actions ticked, as it were, which boxes.

The surprise move met determined resistance—those, including the editor, see the Mahurangi as synonymous with landscape, and the place’s most valuable asset.

Once it was established by the workshop that landscape, as a core component of a holistic Mahurangi Action Plan, demanded appropriate time, the balance of the time was spent on the matrix, but as a dry run only.

The need for work on the matrix to be an exercise only was manifest given the gaps, double ups and errors in the list of 84 actions to be prioritised. Additionally, only some of the attendees had received the list of actions and still fewer had managed to produce their ‘top twenty’, as invited.

Use of a matrix was suggested at the Mahurangi Action Plan breakfast symposium, in 2005. By layering, for each interest group, the relevance of aims, objects and actions, a comprehensive picture can be built up as to who is willing or responsible for what. Additionally, a group may have a number of roles. The new Auckland Council, for example, will have regulatory, planning, education and funding roles. Also having a funding role is the Ministry for Agriculture and Forestry, and some local philanthropists.

To use Mahurangi landscape aesthetics as an example, its importance may be highest to visitors, lowest to oyster farmers—who above all else need water uncontaminated by faeces and suspended sediment. Meantime, the visitors have least direct responsibility for protecting landscape, whereas local government has almost total responsibility for it. But a philanthropist might fund the development of viewing location, from which the landscape can be enjoyed.

A crucial additional consideration was whether the resultant document is to be positioned as the last word, or the first word, on a Mahurangi Action Plan. Because, for myriad reasons, the vast majority of those who learn of the plan will not have been involved in or even aware of the workshops, it is essential to signal that the document is a draft.

Discussion at, and subsequent to, the workshop has resulted in a new timeline:

The working paper for the next workshop (3 May 2010) is the same as issued for the last workshop except that the actions have been revised—at 69 there are 17 fewer, and some have been corrected or refined. Suggestions for further changes to the issues, aims, objectives and actions are invited.

The matrix with the revised actions has been re-issued and groups and individuals are invited to ‘score’ either all 69, or a top 20 or 40 issues. Kim Morresey, the regional council’s sustainable catchments programme project leader, requests:

If you can, please send any results to me before the meeting and we can enter that into an overall table for discussion on the night.

A matrix provides a manageable way of mapping who is interested, or responsible, for what. But it will first be used to determine which actions are considered a priority. Regional council staff may identify different priorities than district council staff, and likewise different user groups may also come up with diverse responses.

Meantime, 69 is still many more actions than most Mahurangi enthusiasts will care to contemplate in one sitting. To break the list down into bite-sized chunks, and to make it easier to deduce their intent, the Mahurangi Magazine has grouped the actions into issues—the first group of eight actions titled Sediment.

Time to dial into the matrix.