A launch a première and call that a celebration 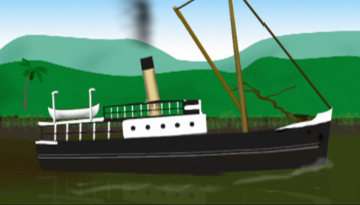 Deforestation Animation: The Kapanui plying the Mahurangi River, adhering to a schedule that would be impossible today due to mud clogging the channel. Animation Majorlook Productions

The venue could not have been better.

It had location. The Mahurangi Magazine e-mailed a last-minute heads up that the bar was opening at 5.30pm. (This was later amended further to 5pm but a second email might have sent a message of unseemly preoccupation with drink!) When those who responded reached the car park, which is at the highest vantage of the vineyard, they were treated to the view back down the river to the heads. Some resolved to return, earlier of an afternoon, and soak in the same view with glass of wine in hand.

It had kind acoustics. The wooden building with its lofty roof was conducive to conversation—conversation, particularly around the draft Mahurangi Action Plan: A Strategic Plan for the Catchment 2010–2030 being launched, was a large part of a purpose of the gathering.

It had hospitable hosts. Shelley Trotter and Gary Heaven, and their children, have been engaged in the Mahurangi Action Plan from its inception in 2004, so were known to most of the guests. Shelley made it her duty and pleasure to meet those she didn’t recognise.

It had wonderful wine and delicious and bountiful food—the rich antipasto platters and bread keep coming all evening.

It had ambience. Much of the wine appeared in carafes from the winery, which opens into the café.

It had wall space—against which a very large screen was erected for the première of filmmaker and cartoonist Craig V Powell’s Mahurangi Action Plan: Weaving Science and Community into Action. The ‘wall space’, in fact, were the barn doors that open the café to the outdoors in warmer weather.

And of course it has the name: Mahurangi River.

Just a small one; my boss is here and I’m driving a council vehicle.

Kim Morresey, the regional council’s sustainable catchments programme project leader, was largely responsible for there being a draft action plan and a documentary to launch. Morresey’s manager could not have been more impressed with the gathering, which included councillors, farmers, foresters, iwi, journalists, local and regional council staff, oyster farmers and residents.

Rodney regional councillor Christine Rose’s sparkling opening address was a perfect prelude to the documentary, which she had nicely narrated at the community’s request, complete with impeccable pronunciation of Mahurangi—after a gentle intervention!

The intervening speechifying was kept mercifully short, the Mahurangi Magazine editor endeavouring to lead by example with a triple toast: To father of regional planning and regional parks visionary, Captain F W O Jones. To John Male, founding chairman of Friends of the Mahurangi, whose vision in 1974 was for there to be a plan for harbour, rather than simply trust it to luck and the developers. And to Kim Morresey, who in 2007 listened and hence there is now a draft plan. The earlier offer of a glass of wine was a pretext to ascertain that the Mahurangi River syrah–viognier presented was preferred to the otherwise charming chardonnay.

The film begins with an animated history of Mahurangi deforestation. Aside from being a useful reminder of ‘the big picture’, it is engaging and delights the young, particularly the defecating cow. The big picture is reinforced with video shot from Rod Millar’s aircraft and a number of locals are interviewed, memorably Jim Dollimore, Temepara Morehu, Peter Thompson and Shelley Trotter. The film itself was suggested at the first Mahurangi Initiative forum, and funded by the regional council.

Unexpectedly, the draft plan wasn’t put through its paces.

It was possibly no bad thing, devoting the occasion to the première and the celebration of a milestone. Also no bad thing given that the draft is due to become more engaging, including by the addition of an introduction along the lines of the Mahurangi Magazine’s quick tour. It will also be further strengthened from the feedback received during the next three weeks.

The value of there being at least an annual gathering of the Mahurangi Initiative forum at the Mahurangi River Winery must have occurred to many of the seventy or so souls present. And of course the perfect excuse for the next, after the plan is blessed by both regional and district councils, is August.

Since 2004, the regional council has spent millions to address the harbour’s elevated sediment accumulation rate. A succinct and sparkling strategic Mahurangi action plan is the best insurance that the new council, with its region-wide responsibilities, will maintain this momentum.