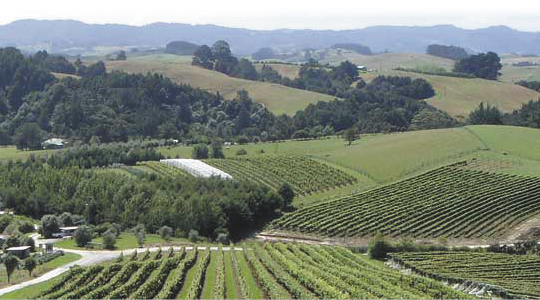 Trail-Blazing Vision: The vineyard Shelley Trotter purchased as part of her strategy for promoting a network of Mahurangi and Matakana cycle and walking trails. photograph Mahurangi River Winery

The suggestion has been made before.

That a Mahurangi Club be established where proponents can socialise and discuss life, the Mahurangi, and everything.

And not just at a general-purpose venue, but at some civilised haunt with a bar and hors d’œuvres.

And with the occasional speaker who, after 18 minutes, will leave ‘members’ a little better informed about some area of general or Mahurangi interest, and uplifted and/or entertained.

The success of the launch of the Mahurangi Action Plan at the Mahurangi River Winery suggests the perfect venue. The ambience is warm and the acoustics are conducive to meaningful conversation. And host Shelley Trotter is one of the most motivated daughters of the Mahurangi ever, having bought the winery largely to advance her vision for a network of cycle and walking trails.

Impetus for holding the first Mahurangi Club evening has been provided by the Pūhoi–Wellsford motorway access issue. On Wednesday evening regional councillor Christine Rose will face a Pūhoi public meeting in high dudgeon at the prospect of losing an immediate connection to the planned motorway. This is a lose-lose for Mrs Rose, who has consistently worked to protect the Mahurangi and to advance alternatives to endless motorway construction.

Clearly there will be less development pressure on Mahurangi West if the first motorway access north of Ōrewa is Warkworth. But motorways are not the infrastructure that NZ Transport Agency should be building. Bypasses should of course be built for Warkworth and Wellsford—Warkworth’s could have been built by now, if the agency had cooperated with the district council’s infrastructure manager a decade ago.

And the infrastructure that is needed by Northland is of a network of cycle and walking trails. Both for the jobs it would create during the construction years, and the employment that would follow servicing the local and overseas tourists—a tourist industry less-dependant on international aviation. 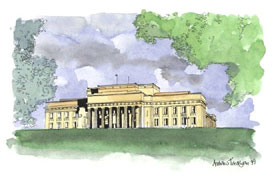 The subject of the talk at the Mahurangi Club’s first gathering will not be motorway access. The pro-access voices are already so vociferous that nothing would be gained, even if it were titled, say, Urban Design and Motorways. Instead, urban designer and watercolour artist Andrew Trevelyan will speak on another subject: Planning for a Low-Carbon World. Or Do District Plans Plan Anything? Or anything that he thinks will get folks thinking about better ways ways to build towns and cities!

As Rodney District Council’s chief urban designer, Andrew Trevelyan prepared a development design guide. This was a breath of fresh air where examples of better design options were contrasted with same old, same old. So, at Monday’s gathering, there will be no show of hands for and against motorway access—in any event, the ‘club’ is not a decision-making organisation. In fact it is not an organisation, but rather a watering hole for folks fond of the Mahurangi, and an evening to spare to informally discuss their aspirations for her.

So when Christine Rose bravely heads off to the Pūhoi inquisition, she at least will be fortified by an evening among people who appreciate how soundly and tirelessly she works for the Mahurangi, and for the region in its entirity.

All similar lovers of the Mahurangi are welcome.