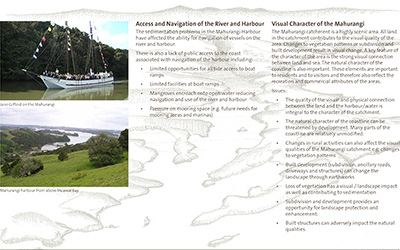 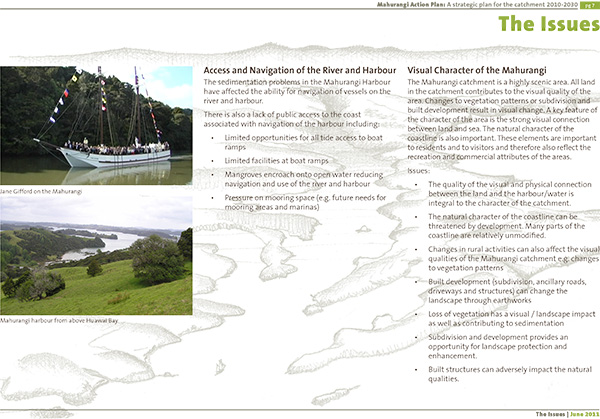 Judge Plan by its Content Not its Cover: The tendency that had to be fought all the way was for the Mahurangi Action Plan to be exasperatingly generic, and avoid specific actions that, while nervous-making to regional council officers, were strongly supported by the community. Navigational dredging of the Mahurangi River was the singularly sensitive subject, but was, after much council gnashing of teeth, included. The fight to have a singular Mahurangi image adorn the cover, however, was lost, and the plan was published with an endearing, but hopelessly generic, cover. publication Auckland Regional Council

In the event, it took about two minutes. Thirty-five years ago, the then county council wasn’t interested, when single-term councillor John Male urged it.

Nor was Rodney District Council, when, on innumerable subsequent occasions, Mahurangi Actionthen known as Friends of the Mahurangi advocated a plan for the harbour. But the word finally did get through, thanks to the Auckland Regional Council. In February 2009, the regional council voted to commit to the Mahurangi long term, and to collaboratively develop a strategic plan for the catchment.

The original plan was to be a five-year kick-start for the Mahurangi before the regional council moved on to another catchment. The title of document formally adopted by district council last Thursday reflects the on-going commitment, the Mahurangi Action Plan: A strategic plan for the catchment 2010–2030.

That the community was listened to is probably primarily down to regional councillor Christine Rose and action plan project leader Kim Morresey. Christine Rose has been a powerful advocate for the harbour even prior to the 2004 action plan launch. And understood the frustrations, recorded by Raewyn Peart in Beyond the Tide: Integrating the management of New Zealand’s coasts:

Staff member Kim Morresey had the principal responsibility to ensure that the plan was genuinely a collaborative effort. This carried many in the regional council outside their comfort zone—the organisation being a tier above the district council and thus less accustomed to dealing directly with community.

With the implementation of the new single-tier regional governance arrangements, the Mahurangi has a plan approved by both regional and district councils before they were subsumed. But it gets better, both staff members closely involved, Ms Morresey and Craig Pratt, the district council’s natural and coastal policy adviser, have retained positions with the new Auckland Council.

At the planting at the Mahurangi River Winery on Saturday, Ms Morresey reported that approval of the catchment plan by the district council last Thursday had taken ‘about two minutes’, and offered that the catchment plan might be dedicated to John Male. The first opportunity to do that will be at the Mahurangi Club after work on the first Monday of the month: 4 October. Pratt and Morresey will be present.

Along with the toast to Mahurangi Actionthen: Friends of the Mahurangi’s founding chairman, the Mahurangi Magazine will be proposing to toast an entirely deserving Auckland Council candidate…

Footnote The Mahurangi Action Plan was adopted by Auckland Regional Council on 17 August 2010, and Rodney District Council on 16 September 2010.