by Cimino16 May 2011Global-warming and population, Moratorium on population, Nuclear power1 comment 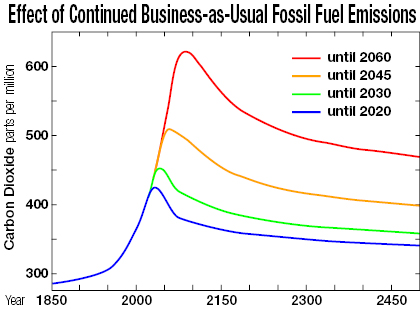 Running Out of Wriggle Room: Hansen et al calculate that if fossil fuel emissions continue business as usual until 2020, even with substantial reforestation, carbon dioxide levels will not return to 350 parts per million for two centuries—far too long for the ice sheets to survive. Chart from The Case for Young People and Nature: A Path to a Healthy, Natural, Prosperous Future, redrawn by Mahurangi Magazine for clarity

In one notable respect, he was not preaching to the converted. With the possible exception of the odd journalist, the 350 people who packed the 250-seat University of Auckland lecture theatre on Thursday evening had been ready to hear everything Dr James Hansen might tell them.

But the world-famous atmospheric physicist’s insistence that more nuclear power is necessary to avert the irreversible melting of the ice sheets triggered an audible gasp. The predominantly anti-nuclear crowd’s memory of mention of the N-word might have quickly faded, had the second question from the floor not been:

So you see part of the solution being an increasing use of nuclear power. Has that opinion changed, in the light of Fukushima?

Nuclear power in this country; I doubt that nuclear power is needed. You happen to be very fortunate and be very wealthy in terms of renewable energy. But I think that China and India, there is no way… At the moment they only have two choices for base-load power: Fossil fuels and nuclear power.

Nuclear power, unfortunately, is scary to people, and its partly generational. I was against nuclear power a few decades ago because it has fundamental problems with nuclear waste, and with the danger of nuclear weapons proliferation.

It turns out that you can solve the nuclear waste problem. With fourth-generation nuclear power, you can burn the nuclear waste. And that was actually demonstrated with a demonstration project in Argonne in the United States a few decades ago. 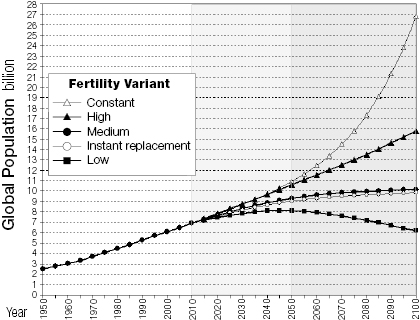 Global Warming Driver: With the global population now projected to exceed 10 billion, the task of reforesting and replacing fossil fuels has become enormous. If population continues to climb at anything like the historic rate, the consequences would be apocalyptic. chart United Nations Department of Economic and Social Affairs Population Division, relabeled by Mahurangi Magazine for clarity

Dr Hansen proceeded to elaborate on the second of two junctures at which the brakes were put on fourth-generation nuclear power:

The most recent one was in 1994 when Argonne National Laboratory told President Clinton that they were ready to make a demonstration of fourth-generation nuclear power. And the anti-nuclear people were so upset by that, and they were strong enough in the Democratic Party that they terminated that research, which was really unfortunate because it’s going forward in six other nations. If United States was responsible, it would try to make sure that development is as safe as possible.

In the United States (the second-generation nuclear power plants, the light water reactors), there was one serious accident, in Pennsylvania, Three Mile Island. But the total number of people who died from that is estimated to be maybe one or two people. The people in Pennsylvania who were exposed to this radiation, in that population, 40‍ ‍000 will die of cancer from other sources of cancer, and maybe one or two people from exposure to radiation.

Even [in] Fukushima, nobody has died yet from radiation. You should never have built that nuclear power plant, which was designed to withstand an 8.2-magnitude earthquake. It turns out they got a 9.0-magnitude earthquake… But the earthquake didn’t bring it down; it was the tsunami.

It was put on the coastline and it was designed to withstand a tsunami up to 3 metres, and they got a tsunami of 14‍ ‍metres.

Dr Hansen then explained that nuclear power plants, even light water reactors, can be designed to shut down without requiring power for cooling. But equally important is the advance made in respect to waste.

…the merits of fourth-generation is that it uses all the energy in the nuclear material, in the uranium.

While the present light water reactors use less than 1% and the other 99% of the waste pile with a half-life of 10‍ ‍000 years. With fourth-generation, [there is] a much smaller waste pile, and its half-life is a couple of decades.

It is impossible to know how many of the 350 attendees will review, much less revise, their anti-nuclear power beliefs. Certainly Jeanette Fitzsimmons chose to ignore the issue when she later praised her fellow Hansen tour organisers, and thanked ‘Jim’.

But if nuclear power is a hot potato, there was one issue too hot even for the author of Storms of My Grandchildren. A question regarding the contribution of population was brushed aside, Dr Hansen suggesting that there was insufficient time to other than concentrate on curtailing the emission of greenhouse gases. This is arguable. Whereas damage from global warming is occurring daily and is a clear and present danger to life itself, overpopulation is indubitably the underlying driver of fossil fuel overuse and wholesale deforestation. Had Dr Hansen’s 1988 congressional hearing been heeded, and fossil fuels been promptly phased out, global population could have been addressed separately. Now the window of opportunity to save the ice sheets is tiny, if in fact it hasn’t completely closed. As Dr Hansen mentioned, the newly announced United Nations medium projection is for population to reach 10.1‍ ‍billion by 2100. However, the organisation notes that a small increase in fertility could see the figure closer to 16‍ ‍billion—a preposterous nearly six times greater than the likely sustainable population of 2.7‍ ‍billion.

Strategically, it seems dubious to defer discussion of de-powering the driver of global warming, out of fear the public will be turned off. Challenging families to think about procreating at a substantially reduced rate will engage a broader cross section in the climate action debate.

It is no small thing to ask, for families to consider the global necessity of boasting fewer grandchildren. Pride in a family’s procreative success is universal. Not only does it predate civilisation, it is probably shared by some non-human species. Dr Hansen asserts that the world is facing a moral challenge comparable with slavery in the 19th century and Nazism in the 20th. Arguably this is an understatement. As monstrous as those two evils were, they didn’t threaten the very survival of Homo sapiens sapiens—which is what is at stake, should all known fossil fuel reserves be burnt this century.

Previous mobilisations on a global scale were to wage war. With their wholesale loss of life, 16‍ ‍million and, possibly, 78‍ ‍million for the world wars respectively, this was manifestly a time to breed more manpower. In contrast, climate mobilisation can only succeed with a determined contraction of numbers.

As asserted elsewhere in the Mahurangi Magazine, a rapidly falling population can also be family friendly. Currently, many feel compelled to honour their parent’s example by emulating their family size. And what potential grandparent hasn’t applied at least a modicum of loving encouragement to a daughter or daughter-in-law. Dr Hansen pointed out that children born today can be expected to be alive in 2100. These ‘grandchildren’ face almost unimaginable horrors when sea-level rise swamps some of the most important food growing regions, and floods increasingly ravage others. Families owe it to their descendants to ensure that they are not so numerous that collectively they will face the massed misery of unintended genocide.

As the 350 rose and headed for the refreshments, Dr Hansen grabbed back the microphone for a brief endorsement of 350.org, named for the target maximum annual level of carbon dioxide, which was exceeded in 1988. Not only has that level been greatly exceeded—it will pass 390‍ ‍parts‍ ‍per‍ ‍million this year—it is now likely that for the ice sheets to survive, the level would need to be at least as low as 300‍ ‍parts‍ ‍per‍ ‍million.

A paper by Hansen et al published a week prior to his Auckland lecture, is the most urgent call yet associated with the scientist:

The ability of life on Earth today to sustain a climate shock comparable to the [Paleocene–Eocene Thermal Maximum] but occurring 10–100 times faster is highly problematic, at best. Climate zones would be shifting at a speed far faster than species have ever faced. Thus if humanity continues to burn most of the fossil fuels, Earth, and all of the species residing on it, will be pushed into uncharted climate change territory, with consequences that are practically impossible to foresee.

Aside from the 350‍ ‍parts‍ ‍per‍ ‍million target probably being too high, four years of 350.org-style activism so far hasn’t provided politicians with the mandate to move from what Dr Hansen terms greenwash to meaningful action. Even the carbon tax Dr Hansen advocates, as necessary as that is, is too little too late. There is insufficient time to wait for any market-led switch to renewables and nuclear. The only way to ensure coal stays in the ground is through legislation. And regulation is the only way to ensure that oil is not simply used by those industries that can afford it, but are reserved for those that need it.

Appropriately, the final question was about hope. Dr Hansen said he had two reasons to be hopeful. The first concerned China’s determination to avoid the worst impacts of warming. Secondly, if re-elected, President Barack Obama has a final term in which his climate action may be bolder. Certainly, President Obama is signalling that he seeks grassroots backing for bolder action. And his chances of re-election have soared, thanks to the killing of the United States’ seeming nemesis Osama bin Laden.

Dr Hansen, soundly, holds no truck with emissions trading schemes, the likes of which the Labour-led government introduced and the National-led government has since bedded in. His objection is twofold. The cost of energy stays too low, because of voter resistance, and industry invariably finds ways to circumvent the goal of reducing emissions. A particularly egregious example is of chlorofluorocarbon factories being built to claim rich credits for chlorofluorocarbon being produced at a fraction of those factories’ capacities.

In Aotearoa, it is probable that John Key will not emulate most previous prime ministers and will not cling to power in the traditional unseemly race to the bottom. This gives reason to hope that, guided by his science advisor Professor Sir Peter Gluckman, Prime Minister Key will further support the globally significant Pastoral Greenhouse Gas Research Consortium, to the continued consternation of primary sector denialists.

And when the Labour Party finally rids itself of corporatist relic Phil Goff, and provided it finds the courage to elect an unabashedly eco–social democrat leader, Aotearoa might be well on the road to regain its long-lost mantle of world leadership, first won in 1893 with the granting of women’s suffrage.

Meanwhile, the Mahurangi Magazine’s hope is that Sir Peter and Dr Hansen meet during this visit.

And its dream: That he meets the prime minister.