by Cimino21 May 2011Establishment trials0 comments

One field day was never going to do it. 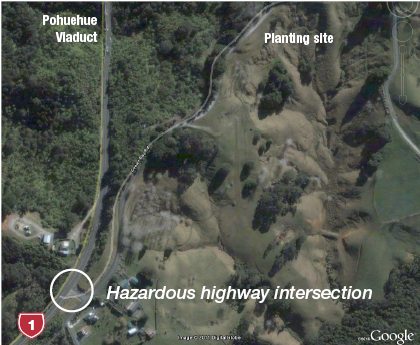 The previous field day, held in February, had left many wanting more. It had focussed on riparian management, for which Solway had won the deer industry award for excellence.

This latest field day was aimed to satisfy those who were particularly interested in the farm forestry aspect, which had been skimmed over.

The day didn’t disappoint, starting as it did with Gary Heaven’s fine kayak nearing completion, farm forestry grown strip-planked of Japanese cedar and culminating in wine tasting session at Mahurangi River Winery. But no, the winery has no plans to grow its own wine keg staves or its own cork, although the latter question was asked.

Prior to fetching up at the winery, the last grove of trees inspected was of chestnuts. While the trees were fruiting prolifically—hatfuls were borne away with the owner’s blessing—it was the interspersed eucalypts that attracted much of the discussion. Planted to help shelter the chestnuts, the eucalypts have outgrown their usefulness and their removal, even for firewood, has become problematic.

One eucalypt had decided its own fate, by being wind thrown. Or rather, as closer examination revealed, its fate had been decided at the time of planting, and was textbook example of an aspect of the open-ground trial that had just been inspected.

Three hundred metres away, on the same property situated on the south side of Sandspit Road, is the first-ever trial comparing open-ground indigenous plants with those grown in containers. The trial was established three years ago and has convincingly established that open-ground nursery practices are more cost-effective than container-raised—plants raised in pots or planter bags, or in root trainers.

Open-ground is the method traditionally used by forestry, involving bare-rooted plants. Aside from being suited to large-scale production—forestry nurseries produce seedlings by the millions—the system has an additional and important benefit. It produces plants completely free of root circling.

Almost anyone who has planted indigenous species will have handled plants with circled roots. In some cases, the removal of the planter bag or pot reveals extreme root circling, where the outer surface is all root and no potting media is visible. Often these will be given a few chops with a spade, or be the root ball will be prised apart by hand. It is doubtful that the plant will benefit much from either intervention.

There is one person who has never planted a tree with circled roots. Jaap van Dorsser for most of his career was the head nurseryman at Forest Research Institute at Rotorua. And it was there during the 1960s that he adapted the nursery methods originally developed for eucalypts and later for radiata pine, to raise indigenous species. It is an anathema to any forester to plant a tree that has less than a high probability of reaching maturity and yielding useful timber. For a crop that takes decades before it is harvestable, it makes no economic sense to plant trees that may fail after the first decade of so.

Since his nominal retirement, Jaap and his wife Susan and one other couple have been the nucleus of the Awahou Stream Care Group. Because Mr van Dorsser’s work indigenous open-ground work was discontinued—a casualty of corporatism—most of plants used, supplied by the regional council, are container-raised. Rather than plant these with their circled roots, the day before planting the team debags the plants, shakes out the potting media and prunes all circled and elongated roots back to where they are sound. They are placed in buckets with their roots covered by water, where they spend the night. The planting goes easier too, as the plants sans soil are considerbly lighter.

Such is Jaap van Dorsser’s conviction that it is problematic to plant trees with compromised root systems. And should anyone doubt him, he has a wonderful collection of specimens of failed container-raised plant root systems to illustrate the phenomenon.

With the open-ground method, the seed or seedling is placed in open-ground beds, where their roots do what roots evolved to do—make their way away from the plant. Overly long roots are periodically mechanically pruned, resulting in plants with a dense mass of short roots.

In contrast, the roots of plants grown in containers almost invariably reach the container wall, where they commence to circle in a futile attempt to grow away from the trunk. When removed from their pot or bag and planted, the plant lacks a mechanism for retiring the circled roots in favour of new, non-convoluted growth. Consequently, it is the luck of the draw as to whether the roots that become dominant sweep away from the trunk to form a strong brace for the tree.

The fallen eucalypt had two fine strong roots bracing the tree on the axis at right angles to the direction it had fallen, which happened to be across the slope. But on the side from which it had fallen, the dominant root, such as it was, was kinked, and it appeared to have grown back under the tree. In any event, it had been providing scant support before the tree capsized, and had broken in the process.

Whether the root system of this particular tree had been compromised by a planter bag, or from some other cause, is moot. The less than two-decade-old eucalypt had provided a graphic example of the importance of a sound root system.