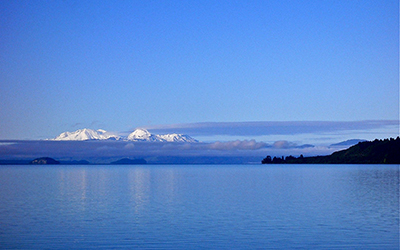 With the Mahurangi Action Plan ultimately calling for the planting of more than 10‍ ‍million trees, coupled with the high cost of establishing indigenous species, the realisation soon dawned that, without a better way, only a fraction of the catchment could be restored.

So began a determined quest for cheaper methods. The result: The first-ever scientific comparison of open-ground and container-raised indigenous plants in Aotearoa. The project was adopted by the Sustainable Farming Fund, with help being received from Rodney District Council. Established in 2008 on Shelley Trotter’s property alongside Sandspit Road, the trial has demonstrated that forestry-style establishment methods are more cost-effective than using ‘conventional’ container-raised indigenous plants.

Shortly before the open-ground plants being grown for the Mahurangi trial were lifted from their beds, they featured in an ‘open-ground open day’ held at the Taupō Native Plant Nursery. The project had piqued the interest of Graeme Fleming, chief executive of the Lake Taupō Protection Trust, who attended and addressed the gathering. Thus encouraged, Dr David Bergin and the editor, on behalf of Tāne’s Tree Trust, wrote the funding application that resulted in the project described here by Warwick Silvester. The science of one project is strengthening the science of the other.

Both heavenly bodies of water benefit.

Reducing the cost of establishing indigenous forest: Saving a lake 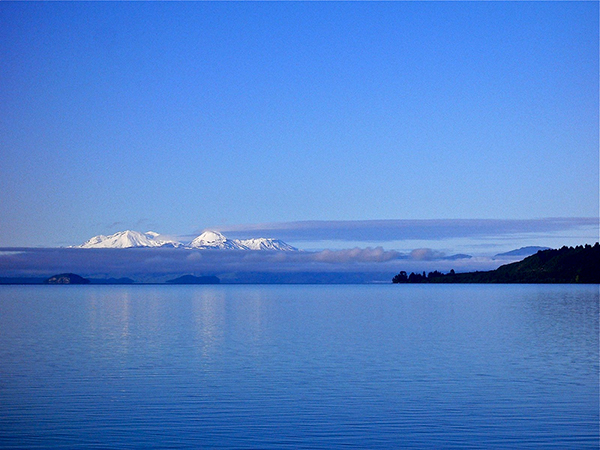 Lake Taupō is the largest lake in Aotearoa. With an area of 622 square kilometres, the lake arose in its present form from the Oruanui eruption of 181 ad.

It contains an enormous body of exceptionally pure water. The iconic status of the lake has recently been tarnished by the understanding that lake catchment development has caused a significant increase in nutrients, especially nitrogen entering the lake resulting in a disturbing increase in algal blooms and a significant decrease in water clarity. Some 30 rivers enter the lake from a variety of developed and undeveloped catchments and monitoring of these, and of lake water, shows a continuing eutrophication of the lake.

In facing this developing problem, Environment Waikato proposed what is called Variation‍ ‍5, a variation to the regional scheme to provide the council with powers to reduce nitrogen inputs into the lake and to reduce manageable nitrogen inputs by 20%. Intensification of land use is identified as the prime cause of the lake decline and a commitment was made by central, regional and district government to actively control nitrogen inputs by managing catchment development. The Lake Taupō Protection Trust was formed with a budget of $81‍ ‍million to manage the progressive capping and reduction of nitrogen inputs by a variety of means.

Comparable: Comparison of mean height increment between plants raised as open-ground transplants and in PB3-sized containers one year after planting at the Waihaha site in 2009. Vertical bars indicate standard errors. chart Mark Kimberley

The major nitrogen inputs into the lake have been identified as increasing intensification of pastoral farming with, in particular, dairying the major source. On the other hand, forests both exotic and indigenous, produce very little nitrogen to the lake and are a preferred catchment option. Return of portions of some farms to forestry is already contributing to a reduction of nitrogen load but planting of indigenous forest in the area has not been seriously considered for at least two reasons: firstly indigenous plant seedlings are very expensive to grow; and secondly, there are no good guidelines on how to go about it.

Tāne’s Tree Trust was awarded a grant from Lake Taupō Protection Trust to set up trial plantings within the Taupō catchment to demonstrate methods of establishing indigenous species and most particularly using open grown plants, as well as container grown plants to attempt to reduce the major unit plant cost of such planting. The project is now into its third year and is managed by Tāne’s Tree Trust member Roger MacGibbon and includes involvement of David Bergin (with support from Scion and Future Forests Research) and Philip Smith (Taupō Native Plant Nursery).

The project started with a trial planting of 1000 indigenous shrub species at Waihaha in 2009 to test the survival and growth of open grown and container grown plants followed by a further planting of 2700 tree and shrub species at the same site and an additional trial at Kawakawa amongst wilding pines. The results have been dramatic with excellent survival of plants (90%) and up to a 40-centimetre increase in height (refer graph). There appears so far to be no significant difference in either survival or subsequent growth of the open-ground plants compared to container-grown and the plants, especially in the 2009 trial, are now competing well with the grass. 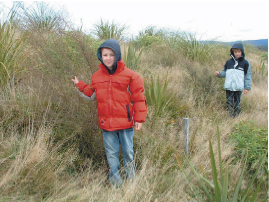 Surviving the Competition: Two-year-old mānuka, toetoe, and harakeke at Waihaha.

There are two major outcomes of this project:

Firstly, even though it is early days in the trial, there has been excellent survival and growth of all plants and using the methods developed here it is plain that indigenous species including trees can be established into grass at Taupō. Secondly and perhaps more importantly open grown plants, that is plants grown and conditioned in open-ground nursery beds and transported and planted bare rooted (similar to establishment of radiata pine) can be established effectively. The main benefits of this are cost—container-grown indigenous plants cost $3 to $5 per plant to produce whereas preliminary estimates from this project indicate open-ground plants may be produced for less than half this cost ($1.50) per unit depending on species. These cost estimates are based on relatively small-scale trials so there is potential for cost of open-ground plants to reduce even further for large-scale production.

This very successful project is showing the way to effectively establish indigenous forest species in the Taupō catchment, with all the environmental and economic benefits that accrue from that.