A little about the Mahurangi Regatta

by Cimino23 Sep 2011About the Regatta0 comments 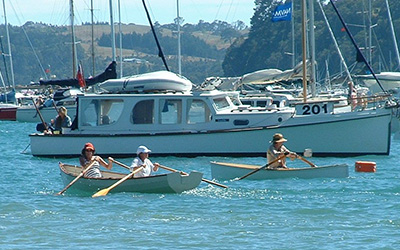 Master Stroke: One of the earliest held in Aotearoa, the Mahurangi Regatta was revived in 1977—by Friends of the Mahurangi, partly to demonstrate that the society wasn’t solely about lodging objections to council plans. Here the Master of the Mahurangi, the first event of the day, is well underway. photographer Keith Salmon, 2010

Held on the Saturday of Auckland Anniversary weekend, the Mahurangi Regatta nicely bookends the region’s weekend of festivities that culminate in the world’s largest regatta, sailed out of the Waitematā Harbour on the Monday.

For some the regatta begins on the Friday evening, with the night race to Mahurangi, which the Devonport Yacht Club began in 1979. When the wind is light, the fleet arrives at the heads as night is falling, forming a flowing river of red and green navigation lights that stretches back to Whangaparāoa Passage.

Dawn reveals bay after bay brimming with ninety or more yachts apiece, and more on the way. 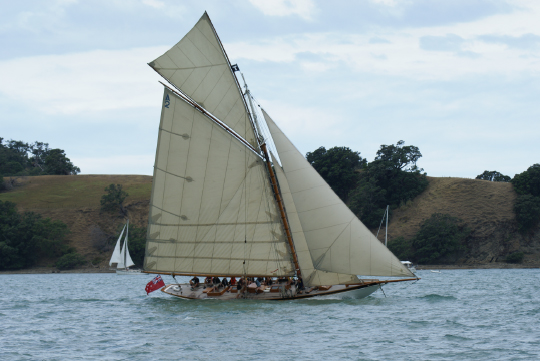 Line Honours: Since the instigation of the Mahurangi Cup in 1988, the Mahurangi Regatta has hosted one of the best-attended classic wooden boat races. Here the Thelma is on her way to taking line honours 2010. photographer Richard Gladwell, 2010

From 9 am, skippers stream ashore to the entries tent, and hundreds of small boats arrive by road—this is the only day of the year that boats can launched by trailer at Sullivan Bay, in the Mahurangi Regional Park. Assigned local expertsUntil ????: Park rangers, using the park tractor do the actual launching, in the interests of safety.

At 11 am the shoreside competitions get underway, as does the prestigious Master of the Mahurangi rowing race. The actual order of events varies to take tide into account—the running races requiring a generous expanse of hard sand. Certificate vouchers are awarded to place winners, and participants generally, particularly if very young and looking downhearted. It is all very friendly and informal. And every year parents who just happened to visit the park and discover the regatta in progress are delighted to find their children included and winning treasured certificates.

At midday there is a welcome break from the events—certainly for the hard-working volunteers—while picnic lunches are enjoyed. To ensure it is family-affordable, no vendors are allowed into the park—parents can enjoy a day without continuous demands for money for food, drink or entertainments. And the tap water is entirely palatable. 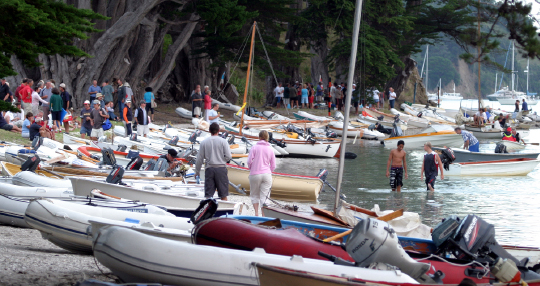 While all might be relaxed and genteel ashore, the harbour undergoes a transformation, with hundreds of mainsails hoisted as a hundred yachts gets underway and into position in preparation for the start of their particular race. Unquestionably the most prestigious division is that sailed for the Mahurangi Cup, in wooden yachts of pre 1955 design. Other divisions cater for traditional-styled and classic yachts large and small.

The first start gun is fired at 12.30 pm, and for the next three or four hours a glorious parade of sail passes back and forth as yachts sail out of the harbour, around Saddle Island, and back, and up-harbour to Scotts Landing. The course is generally sailed twice, with the start–finish line in full view of the picnickers in Sullivan Bay.

By this time all the beach and swimming races have been run, and finishing touches are being applied by teams of children to dozens of sand sculptures, in preparation for their judging. And once boat crews have had time to get ashore, the tugs of war form a straining, boisterous finale to the competition. 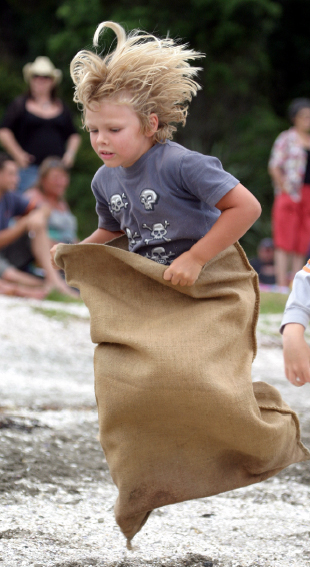 At this point most pack cars—some retrieving sailing dinghies—and head home. Meantime, the attention of yacht crews and locals moves across the harbour to Scotts Landing, and the prize-giving and dance. A large marquee awaits the arrival of the swing band, but the anticipation is for the race organiser and handicapper to finish their calculations so that the invariably very entertaining prize-giving can begin.

Meanwhile, famished crews and children are being fed, and the band can be heard warming up.

By mid-evening, the West City Jazz Orchestraat Mahurangi Regatta’s 2004–2016, styled: Prohibition Big Band has nearly everyone dancing. Complementing the colour and warmth of the dancers, the scene offshore is a wall of riding lights stretching up and down the harbour, seemingly without break to Jamieson Bay opposite. The effect is enhanced if the tide is full, which it will be at midnight at the 2012 regatta. But by then, the musicians will have wended their way home, bar a number taking advantage of local hospitality and the long weekend, and the last of the crews will have found their way back aboard their respective vessels.

And, from somewhere off Scotts, a solo trumpet sounds a final few soulful notes.