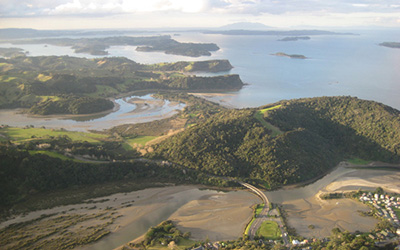 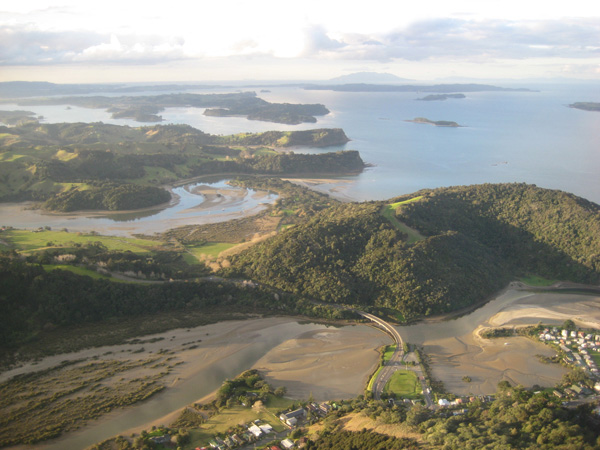 New Beginning: Wenderholm, lying between the Waiwera (foreground) and Pūhoi rivers, was the first ‘modern’ regional park created by the then Auckland Regional Authority, on the watch of Judge Arnold Turner. Rodney Local Board support is being sought for a study of the feasibility of the long-mooted Mahurangi Coastal Trail, which would connect the 900-hectare Wenderholm–Mahurangi regional park to the metropolitan transport system—Mahurangi Harbour is the main body of water beyond the Pūhoi. image ImageShack

The grandest entrance to the harbour is from the sea, under sail.

Coming a sublime second is to discover the Mahurangi on foot, from Waiwera. Currently, this requires closely judging the tide and some determined wading, to cross the Pūhoi. Once across the river, the intrepid few who attempt it are memorably amazed—first at the miniature Wenderholm that is Te Muri, and then at how quickly they find themselves on the saddle overlooking Sullivan Bay and the Mahurangi Harbour.

The last supporters’ walk promoting the Mahurangi Coastal Trail was held circa 1987, led by Sir Brian Barratt-Boyes, a long-time local resident who’d inherited his mother’s coastal farm on the southern flank of the Waiwera Hill. Because of the concept’s obvious potential health benefits, the world-famous heart surgeon had readily lent his support to developing Te Muri for walking access only. One barge ferried walkers across the Pūhoi, and another, an oyster barge, ferried folk across the enchanting Te Muri Estuary. At the terminus of Ngārewa Drive, a bus was waiting to return the walkers the 16‍ ‍kilometres to Waiwera, thus emphasising the circuitous 10‍ ‍kilometre-longer route that road-bound park visitors must take.

The walk was successful in helping head-off plans by the then Auckland Regional Authority to build a road from the end of Ngārewa Drive down the hill, to cross Te Muri Estuary by way of a concrete bridge, and to provide parking for 1000–2000 cars. Parks management was far from pleased that its plans were spurned by the community, and by the Citizens Advisory Group headed by Judge Arnold R Turner, since made a companion of the Order of St Michael and St George. Management’s displeasure was such that it deigned to not progress the discretely sited, low-key boardwalk and bridge that were central to the walking access concept. The excuse baldly given was the absence of funding, despite the cost of the crossing being miniscule compared the substantial concrete road bridge the same council officers had earlier been advancing—the geotechnical drilling done, which had alerted locals to the authority’s secret plans, would have more than paid for the unobtrusively sited pedestrian crossing proposed. 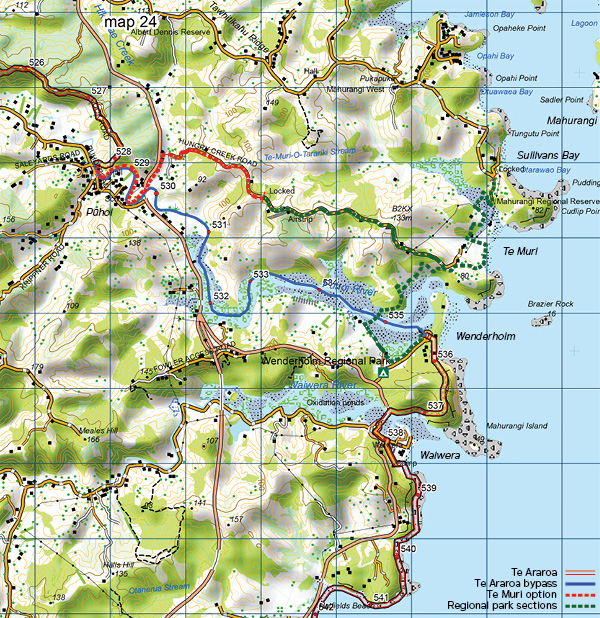 Approaching Silver Anniversary: The Mahurangi Coastal Trail was first promoted in 1987, as an alternative to regional authority plans to bridge the estuary and provide parking for 1000–2000 cars at Te Muri. Concept map Mahurangi Magazine

In September 2010, as it was being subsumed into the new Auckland Council, the regional council acquired the farm that abuts the regional park at Te Muri. Apart from the eye-watering $15‍ ‍million purchase price, supporters of the Mahurangi Coastal Trail concept were immediately concerned that the knee-jerk reaction would be to build a park road into the property, and in the process rob Te Muri of its sense of splendid isolation, and potentially rob the Mahurangi Coastal Trail of its raison d’être. Despite the Mahurangi Magazine ventilating this issue regularly since then, no indication that this concern is unwarranted has been discernible. It would be tragically ironic if a $15‍ ‍million purchase—the cost of Te Araroa, the 3000-kilometre-long national walkway just completed—diminishes a potentially world-class 10-kilometre coastal trail, easily accessible by 1.5‍ ‍million Aucklanders.

The longstanding weakness of the regional parks network is its lack of accessibility by non‍–‍ car using Aucklanders. Once this might have been seen primarily as a social justice consideration. But with the Draft Auckland Plan heavily emphasising a more compact urban format, particularly to reduce energy consumption and thus greenhouse gas emissions, it is now a critical moral issue. The Mahurangi and Wenderholm regional parks are the perfect place to put into practice the draft plan aspirations. Waiwera is the northern terminus of Auckland’s public transport system, meaning that with the addition of the Mahurangi Coastal Trail, Aucklanders can access nearly 900‍ ‍hectares of parkland within a 62-minute express bus ride of Wellesley Street.

Although blithely obfuscated by the election campaign, there is a rapidly dawning realisation that the so-called global economic downturn is in fact a persistent and prolonged depression, particularly as measured by actual unemployment rates. For the next decade or more, only the relatively wealthy will be able to purchase their pleasures. For the vast majority, access to good, old-fashioned simple pastimes will be invaluable, if this period of austerity is to be liberating rather than crushing. As the proud new owner of a regional parks network par excellance, Auckland Council has a pivotal role to play in alleviating the gulf that exists between those out of work or on or near the minimum wage, and the fortunate few. Regional parks allow cash-strapped folk to live like the 1% for a few hours—or days, where camping facilities are provided.

When introduced to the concept, Aucklanders and other visitors to the area are immediately excited by the potential for the Mahurangi Coastal Trail. In contrast, regional park officers seem to suffer from a siloed viewpoint that mostly sees the parks as discrete, standalone destinations, accessed by private car. A glimmer of hope is a plan for a kayak ‘trail’, commencing at Wenderholm. The purchase of Te Muri hinterland begs for a fresh look at what have been treated as two separate parks: Wenderholm and Mahurangi. Treated as a whole, the 900-hectare park can provide an entirely more profound experience than the sum of its parts. In particular, the park could boast an interior—a reward for the slightly more intrepid park user. This, however, depends upon the interior being accessible by trail, rather than by road. Similarly, the sense of achievement in walking or cycling to Te Muri would be cheapened were the bulk of the park’s users simply encouraged to merely drive to the beach there. 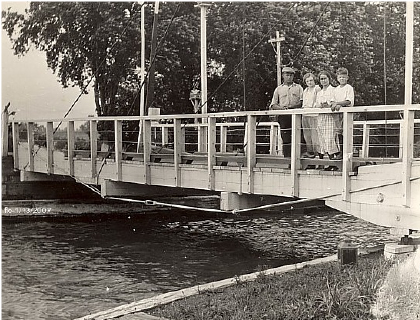 ‘Historic’ Pivot Bridge: The Great North Road crossed the Pūhoi River using a bridge similar to this on the Chesapeake and Delaware Canal of a like era. Given that the span would only occasionally need to be opened—most craft using the Pūhoi would simply sail under it—it could form a practicable and interest-generating feature of the long-mooted Mahurangi Coastal Trail. image courtesy Jeanne Harmon

An additional strategic consideration is the need to create conditions conducive to the instigation of a viable Mahurangi Harbour ferry service. Such a service, between Mahurangi West and Scotts Landing, would place the emergent Mahurangi–Matakana wine trails within reach of Auckland public transport.

A second irony regarding the near 25-year resistance to the Mahurangi Coastal Trail, is that the Auckland Regional Authority itself had planned to build a scenic coastal road to connect Wenderholm and Mahurangi. However, by the time it had geotechnical engineers drilling in Te Muri Estuary, it had abandoned plans for the Pūhoi–Te Muri section, considering that the fashion for enjoying wilderness areas through a car windscreen had since past. Fast-forward to 2011, and an entire chapter of the Draft Auckland Plan is devoted to climate action, and much of the rest of it is devoted to ‘making a quality compact Auckland work.’ The regional parks cannot remain the last bastion of private transport—to build a park road for the sole purpose of encouraging car access to Te Muri would be the height of collective council hypocrisy.

The existing ridge road, aside from its essential agrarian function, should form the basis of a premium alternate Te Araroa route between Pūhoi and Wenderholm, as well as a round trip incorporating a tide-assisted kayak or riverboat Pūhoi River leg. As a road to yet another car park, it would make for a miserable walking experience, with the private car once again enjoying ascendancy. It would also make for an extremely dangerous intersection at State Highway 1, depending upon whether the National-led government persists with its motorway construction plans in the face of the deepening debt crisis.

In summary, Aotearoa faces a grim decade or more of austerity, which makes access to the regional parks enormously important to the happiness of cash-strapped families. Rather than spend more money on roads pandering to the well-heeled and mobile, a little should invested to unlock the potential of a 900‑hectare Mahurangi regional park, by connecting it to the metropolitan transport network already in place.