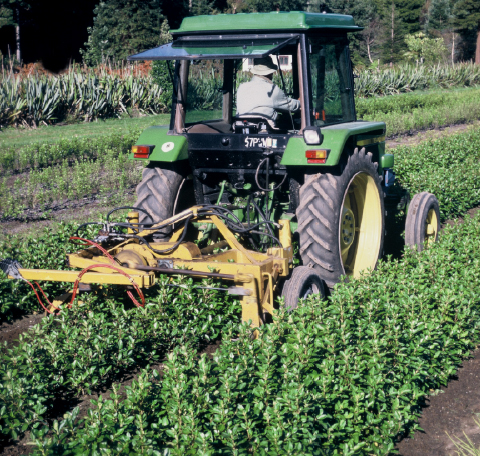 Next week’s open-ground field days have just become a much bigger deal.

Philip Smith of Taupō Native Plant Nursery said on Thursday that Landcorp has taken every open-ground plant they currently have growing, and that next year Landcorp is intending to order open-ground plants exclusively, in preference to container-raised stock. This development marks a major milestone in the initiative that commenced, in 2005, as a direct result of the Mahurangi Action Plan.

The action plan had been announced the previous year, following 10 years of scientific studies that suggested the stress observed in the harbour’s benthic communities—the like of cockles and horse mussels—was due to an elevated sediment accumulation rate. The harbour’s hydrological catchment needed the protection of many more trees, not only on the critical riparian margins but also, in some badly eroding land, wholesale retirement from grazing. Long-term, millions of trees needed to be planted, and for a raft of reasons these should be of indigenous species.

The catch was that indigenous plants, on average, are 10-times more expensive than exotic seedlings such as radiata pine. Not only that, more are needed because unless planted relatively densely, or diligently managed, adventitious species such as kikuyu can destroy entire plantings. Consequently, the cost of successfully establishing indigenous trees can be in the order of $40‍ ‍000 per hectare. To significantly reduce the sediment accumulation rate, some 10‍ ‍million trees need to be established, and sooner rather than later—the warming atmosphere is holding increasing amounts of moisture, meaning that heavier and heavier dumps of rain are set to increase sediment generation. Professor Ashish Sharma, school of civil and environmental engineering at the University of NSW:

A warmer atmosphere holds more water and releases it in shorter bursts, as seen in the tropics.

A glimmer of hope emerged in 2005 when it was belatedly learned that indigenous plants had already been produced more cheaply, and in large numbers, using forestry nursery methods—plants raised in open-ground beds, rather than in containers such as planter bags and root trainers. An application was made to the Sustainable Management Fund to resuscitate the solid work done by the Forest Research Institute in this field, in the 1960s and 1980s. That application was unsuccessful, but a similar application, to the Sustainable Farming Fund, for $135‍ ‍000, succeeded. In 2008, the first-ever scientifically designed open-ground trials were established, in the Mahurangi.

On the strength of the news of Landcorp embracing open-ground plants, Jaap van Dorsser has agreed to attend next week’s field days—in Glenbrook on Thursday and in Mahurangi on Friday morning. As the Forest Research Institute’s head nurseryman, Mr van Dorsser adapted the industry-standard nursery methods he’d helped develop for exotics, for indigenous species. When told of the Landcorp breakthrough, he said for too long it seemed for that his life’s work was going to come to nothing, although those familiar with his legendary Awahou Stream riparian restoration work would no doubt argue. But a mission of the state forest service then to facilitate Aotearoa’s third, national-scale, land use transformation—the previous transformations being: indigenous forest to pasture; pasture to exotic forest. Sadly, privatisation of the forest service set that vision back by half a century—a sustainable indigenous forest products industry would otherwise by now be hitting its straps.

As lamentable as that may be, many of those attending next week’s field days, and others following the open-ground project, will share a meal in the Mahurangi on Thursday evening to celebrate Taupō Native Plant Nursery’s achievement in interesting a major customer in going open-ground.

A unique opportunity to dine with a heroic New Zealander.