Standing room only and tail wind to Waiuku 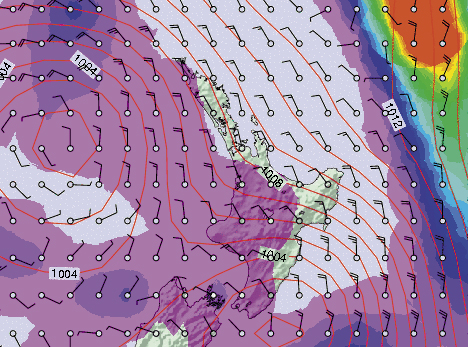 Tail Wind to Glenbrook: Against the odds, the open-ground field days are being favoured by the weather, with the worst of Thursday’s rain mostly set to miss the north of the North Island. image MetVUW, 201203221300 NZDT, issued at 201203210700 NZDT

It could be seen as the epitome of the failure of market forces. Raising indigenous plants by the open-ground method was always going to be more cost-effective, yet it was the many more times expensive planter bag method that became an overnight success.

The explanation as to why this occurred is many-fold. One aspect is the quaint notion that handmade is best. If cars had only ever been handmade, they would forever have remained the preserve of the wealthy. While the world would have been better off, on-road transport being the greatest net contributor to atmospheric warming, the point here is that handmade generally equals high cost.

Another factor is that humans are rationalising, rather than rational, beings. Presented with the fact that only two commercial nursery companies that are producing indigenous plants open-ground, while there are literally hundreds using the container method, the rationalising response is to suppose that container-raised is better. Such rationalising readily becomes self-fulfilling.

Given the widespread enthusiasm for planting indigenous trees, a method that theoretically could reduce plant prices to the 30‍ ‍cents apiece paid for high-quality radiata pine should be of huge interest. And rather than a single busload heading off to Glenbrook tomorrow morning see the method firsthand, a small fleet would be needed—or a train, again, if decision-making was rational, rather than rationalising. As it stands, the single bus will be full only for the three-kilometre run between Taupō Native – South Auckland and the luncheon venue—for the Warkworth to Glenbrook trip, ten seats are going begging. If these were to be filled, ferrying the extra folk to the local hockey pavilion will be a pleasure.

Although the last few days’ rainfall at Glenbrook hasn’t been extreme, and tomorrow’s forecast is for a dry northerly wind, boots or gumboots for the open-ground nursery are recommended—also for the Whitecliffs indigenous forestry trial inspection, 13‍ ‍kilometres away. Meantime, at the Taupō Native Plant Nursery site, much damage was inflicted by the strong winds, causing staff members to be sent home least they be struck by flying debris.

While the rationalising instinct has played its role in marginalising the open-ground method, it will now begin to kick in, as major players such as Landcorp, see that there planting money will go much further by embracing this forestry-style approach.

With Auckland Council strongly supporting the field days, the longer-term challenge will be ensuring that its planting budget is increasing spent on this more cost-effective option.