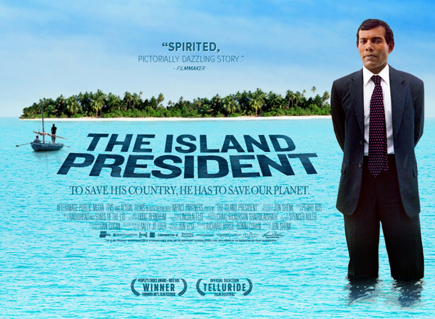 Unafraid: Faced with an increasingly vicious response visited on his supporters, probably the majority of Maldivians, Mohamed Nasheed was man enough to ‘resign’ his presidency and take his people’s struggle for survival to the world stage. image The Island President

The ex-president of the Maldives is seeking to make sea-level rise a presidential election issue.

Forced out of office at gunpoint in February, Mohamed Nasheed is in the United States promoting the documentary The Island President. On the Daily Show, Nasheed said:

…politicians only do what their people tell them to do, and I’m afraid the people of the United States are not telling their politicians to be concerned about climate change.

If it was only that simple. As illustrated by the National Party’s pre-emptive veto of the paid parental leave legislation, despite the bill enjoying popular and political support, many decisions are made along ideological lines. The excuse of un-affordability of the anticipated $150 million per year could well be tested against National’s billion-dollar-a-year borrowing for motorways. National’s predilection for a free market landscape—to back, and be backed by, the road transport and construction lobby—means that no amount of rational argument will sway it from its ideological, and ruinously carbon-intensive, pathway.

Under Nasheed’s leadership, the fledgling democracy of the Maldives had become one of the very few countries to take the world to task on global warming. However, as Nasheed told Amy Goodman of Democracy Now:

It’s easy to beat a dictator, but it’s not so easy to get rid of a dictatorship. The networks, the intricacies, the institutions and everything that the dictatorship has established remains, even after the elections.

With the old regime back in power—three of the former dictator’s sons are back in the cabinet—it has no interest in promoting the Maldives as the poster child for global warming, much-less continuing with Nasheed’s incisive plan for becoming fossil fuel free by 2020. There is great potential potency of a small country becoming a fossil-fuel-free exemplar, and none more so than the achingly beautiful and vulnerable two thousand islands that make up the Maldives, with their average height of 1.5 metres above sea level. But for this to be a sustainable position, there needs to be a combination of an inspirational leader, a shared vision, and a robust democracy. 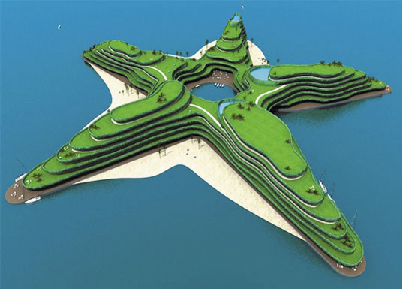 Stark Island Vision: So dire are the prospects for the survival of the Maldives, which average a mere 1.5 metres above sea level, that life without land is having to be urgently explored, including this concept for a floating ‘island’. image Inhabitat

The Maldives has, or had, leadership in spades—arrested 20 times and imprisoned for much of the two decades prior to being elected president in the state’s first free elections, Nasheed well-deserves his epithet: Mandela of the Maldives. And it has the shared vision. Unsurprisingly, the 330 000 Maldivians are greatly exercised by the sea-level rise that is already biting, including the salinization of their wells. But it was the lack of a robust democracy that has robbed international forums of a much-needed voice—the old regime just bought and bullied its way back into power.

In stark contrast, Aotearoa can boost a mature and ostensibly robust democracy, but it lacks inspirational leadership and a cohesive vision.

A vision could readily be fashioned, from values that New Zealanders have long held dear: Landscapes of outstanding natural beauty, ready self-belief, and at least the memory of a fair and caring society. The Greens’ ‘richer New Zealand’ election campaign resonated nicely and the party’s popularity has now surged to an unprecedented 17%. But with the abandonment of memorandum of understanding talks on Friday, the opportunity for a broader blue–green growth vision has been discarded, and battle lines have been drawn for a showdown in 2014 that is likely to see National in opposition and about 44% of the electorate unrepresented in the next government, thanks to the two-party mentality that continues to hold sway. Routinely sidelining such a large percentage of the population is a recipe for divisiveness. And as long as the people are pitted against themselves, big business will cheerfully call the shots. Part of the solution involves putting the power to determine whether a particular coalition rules or whether a grand coalition rules, directly in the hands of the voters.

Aotearoa, profitably, could reinvent itself as the first nation to fully embrace the opportunities that anthropogenic global warming will force on the rest of the world, sooner or later. New Zealanders are famously early adopters, and by moving quickly and cleverly to wean the country off its million-dollar-a-day fossil fuel habit, the country could be soon be in an enviable fiscal position. Ngā Haerenga, the New Zealand Cycle Trail, and the Ōtago Central Rail Trail that inspired it, epitomises the vision is already shared not only by New Zealanders but also the fossil-fuel-aware visitors that Aotearoa increasingly needs to target. Sadly, Sue Moroney chose to deride the national cycleway, when bridling at the Minister of Finance’s veto of her extended paid parental leave bill. To claim that the trail is going nowhere simply because it is the darling of the prime minister is selfish mean-minded bipartisanism—two mean minds don’t make a fair one.

There is speculation that the Maldives coup coup d’état was the work of global fossil-fuel interests determined to shut down a mouse the roared. While that it is entirely possible, it is likely that the family and cronies of dictator Maumoon Abdul Gayoom, who ruled for 30 years, possessed motivation aplenty without oil oligarchy inducement. However, if Aotearoa was to champion a smart fossil-fuel-free future, it is unlikely that big oil would be happy for that to solely be the democratic decision of the people. Astroturf organisations would proliferate, like the bogus Association of Community Retailers that pretends to be concerned with the plight of the corner dairy, in order to protect the interests of big tobacco.

Soon after the Rena ran aground, a chemical dispersant was being sprayed from the air. Bearing the almost unbelievably Simpsonesque trade name Corexit, the dispersant is hideously toxic in the marine environment, and to people involved in cleanup operations that are exposed to it—3100 litres was ‘trialled’ in the Bay of Plenty; 800 000 million litres used in the Gulf of Mexico following the Deepwater Horizon disaster. The grotesque reality is that dispersants are employed not to reduce the damage caused by an oil spill, but to make it difficult to quantify the size of the spill, and thus reduce the culprit’s financial liability for it. That is why it is invariably the first response by oil driller to a spill. Asked by Radio New Zealand what needed to be done to ensure that oil spills were handled responsibly, United States Environmental Protection Agency senior policy analyst Hugh Kaufman said: 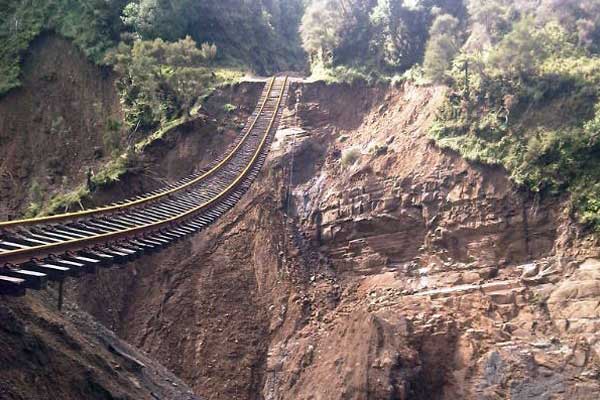 Warming Double-Whammy: Not only is rail an increasingly important part of climate action, transport infrastructure generally will become difficult to maintain due to the impact of increasing, and increasingly extreme, rainfall events. image Stuff

You have to have enforcement of the civil and criminal penalties that would require people to do things the correct way under the law, and you would have to also make sure that your campaign finance laws are such that it is not so expensive to get elected to office, and the people who are elected to office are the ones that handle the enforcement making decisions. If it is too expensive, so that only the oil companies or the financial firms can make the contributions necessary to get people elected, then you are in trouble.

Aotearoa’s democracy, like most, is weak in this and several other important respects. So that even if the people do as Mohammed Nasheed extols them to, and they tell their politicians to be concerned about global warming, the response is likely to amount to little more than lip service. Taking the imminent permanent closure of the currently slip-closed Gisborne–Napier rail line as an example, road transport is highly fossil-fuel dependent, whereas electrified rail can readily powered by non carbon-dioxide-producing energy sources. Rail lines also provide ideal gradients for the cycle and walking trails—rail with trail—that are utterly integral to the future of low-carbon tourism. However, governance of the infrastructure has been outsourced to KiwiRail, whose chief executive Jim Quinn said of Saturday’s rally calling for the line to be repaired:

It’s good that people are passionate. Our role in the coming weeks is to make sure they have the facts to back that passion up, because passion for passion’s sake isn’t enough.

By characterising advocacy for rail as passion, then setting up the suggestion that the advocacy—the passion—might be ill founded, is a classic technique for preparing the public for disappointment. Such finesse with ‘managing expectations’ is, apparently, why the managers of state-owned enterprises are paid the big bucks. 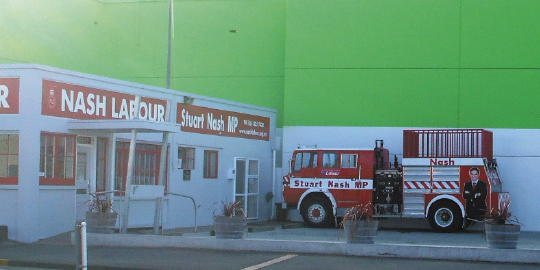 Of visionary leadership, the third necessary component for an island state to make its mark, there is little sign. Prime Minister John Key’s popularity has dropped four points as he demonstrates that, having secured a second term, he is determined to put free market ideology ahead of, for example, the 76% opposed to the sell-off of major assets. Meantime, Labour’s new leader David Shearer has elected to go to ground, and after only three months his chief of staff, and probably his party’s most promising material, Stuart Nash, has quit. Elsewhere, to have anyone approaching the charisma of Mohammed Nasheed, the Greens would need to recruit Lucy Lawless. But not content with how rare it is for a political party to succeed in attracting a universally attractive leader, the Green Party has saddled itself with the double-hurdle of co-leadership.

For Aotearoa to become the climate action world-leader, it will have to be the best at everything. Much of this will involve the early-adoption of policies, products, systems and strategies developed elsewhere, while many will be homegrown, such as large-scale establishment of indigenous forestry, world-needed anti-malaria drugs, and the consummately efficient Shweeb. But becoming the world’s best green-growth tourist destination will require more than just more-fuel-efficient air travel—both wind and nuclear-powered liners will be needed.

In its submission on the Auckland Plan, the Mahurangi Magazine suggested that ‘green growth capital of the world’ would be a more meaningful aspiration than ‘the world’s most liveable city.’ The equivalent for Aotearoa might be ‘green growth nation’, but it would have to share the title with Denmark and South Korea, and hopefully an increasing number of countries.

Besides, Aotearoa 100% Pure is the vision New Zealanders already hold, in their heart of hearts.