by Cimino14 May 2012Sea-level rise2 comments 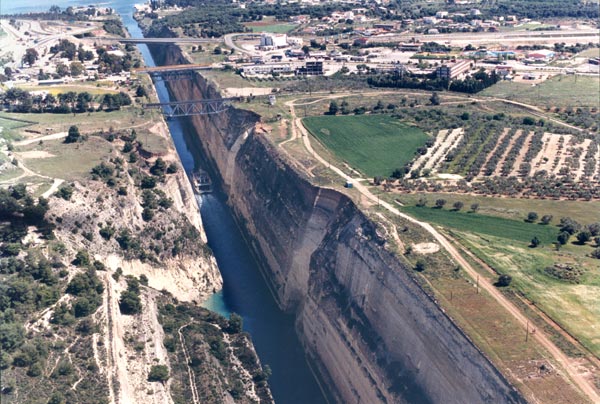 Tracing the Geoid: Thanks to variations in the planet’s density, and thus its gravity, the surface of the geoid is deflected, undulating by a total of more than 190 metres. And if the continents were dissected by sea-level canals—the Corinth on steroids—the water level those hypothetical canals would trace the surface of geoid, as does the surface of the oceans elsewhere.

Water finds its own level. Or at least that is the received, and generally entirely useful, wisdom.

Water in a hose, for example, can make a useful builder’s level. However, as anyone who has actually attempted to use one will likely attest, the odd bubble of air in the levelling hose, or section of it lying in the hot sun, would soon see the apprentice dispatched—prior to the $30 laser level—to hire or borrow a ‘dumpy’.

It’s reasonable to imagine that, tides and storm surges notwithstanding, water in the world’s oceans would find its own level. That ‘level’, however, varies worldwide by more than 190 metres, thanks largely to variations in the Earth’s density. In the Indian Ocean, immediately south of the subcontinent, the sea level is effectively 106 metres lower than the global average. But perhaps more surprising, for New Zealanders, is that from North Cape to Bluff there is a 40-metre decrease in sea ‘level’—or for Australians, a staggering 100 metres from Cape York and Cape Leeuwin.

The surface of oceans, and the surface of any Corinth-style canals connecting those oceans at sea level, roughly forms a sphere. A spherical Earth was monumental advance on a flat one, but some fought a ferocious rearguard action against that far from intuitive reality—strongly reminiscent of contemporary anthropogenic global warming denial, which would be hilarious if it wasn’t for the tragic consequences of the resultant delay. It was in six-mile section of canal that the earth’s curvature was successfully measured by co-conceiver of the theory of evolution, Alfred Russel Wallace. The drainage canal, grandly titled the Old Bedford River, had witnessed a number of attempts to prove the world was flat where refraction had conspired to reinforce the misapprehension. The showdown between Samuel Birley Rowbotham (a.k.a Parallax) and Wallace won the latter a £500 wager put up by Rowbotham’s deluded cheerleader, John Hampden. However, it proved to be anything but easy money when Hampden, increasingly unhinged, viciously harassed the surveyor-turned-naturalist, who recorded in a letter to the editor of the Chelmsford Chronicle, in 1875:

Lows and Highs: The geoid is at its lowest point, -106 metres, in the Indian Ocean immediately south of the subcontinent, and at its highest, 85 metres, at New Guinea—relative to a reference ellipsoid. Sea level at the North Cape, meantime, is 40 metres ‘higher’ than at Bluff, reflecting Aotearoa’s siting on the interconnecting slopes of the geoid’s two largest features. image macpurity.net

From the moment the experiment was made Mr Hampden has claimed to have won the wager, on the ground that the water is really a plane, and that my experiment showed it to be so! And he still persists in this view, claiming not only the money he lost but my money which he says he has won. I have numerous letters extending over nearly five years, in which he declares that he will never leave me in peace until I have paid him the whole £1000.

But neither of course is Planet Earth a perfect sphere, being 0.3%, or 42-odd kilometres flattened at the poles, and undulating to boot, by a further 200-odd metres. Atop that geoidal variation is a further two metres of ocean topographical variation, influenced by ocean circulation, ocean temperature, and salinity—the trade winds, in non-El Niño conditions, pile the sea level up by half a metre in the Eastern Pacific.

All this makes the accurate measurement of sea-level rise a fiendishly difficult task. Thanks to the work of Petr Vanícek, to the Grace twin satellites, and more recently to the Goce satellite, which aims to resolve the vertical shape of the geoid to an accuracy of 1–2 centimetres, scientists are finally close to knowing just how rapidly sea-level rise is accelerating. Sea-level rise, pre –industrial era, was an average of 0.1–0.2 millimetres per year. Then, until 1993, that jumped to an average of two millimetres per year. Satellite altimetry indicates the annual rise from 1993 to 2010 to be 2.9–3.4 millimetres, ± 0.4–0.6. If this work had commenced promptly it became evident that warming presented a clear and present danger, the rate of acceleration would now be accurately known. While the latest peer-reviewed projections of the maximum 21st century rise range from 1.6 to 2 metres, Dr James Hansen cautions: 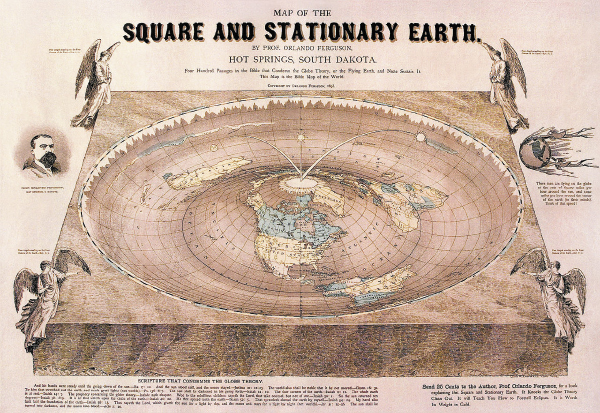 Modern View: Despite the ancient Greeks getting it right, flat-Earthism took off in the 19th century, as something of a backlash against science, vigorously promoted by Samuel Birley Rowbotham a.k.a Parallax. The parallel with climate denialism is uncanny, but whereas flat-Earthism was a largely victimless crime against reason—Alfred Russel Wallace’s travails notwithstanding—obstructing action to reduce greenhouse gas emissions is already contributing to more than an estimated 300 000 deaths per year. image Wikipedia

Sea level rise, despite its potential importance, is one of the least well understood impacts of human-made climate change. The difficulty stems from the fact that ice sheet disintegration is a complex non-linear phenomenon that is inherently difficult to simulate…

It is hardly surprising then that local government policy on sea-level rise in Aotearoa is confused. Figures, where council have any, for the likely rise by 2100 vary from 0.49 to 1.0 metres. Dr Hansen advises that long term, 10 metres of sea-level rise can be expected from every 1°C of warming, and warns that business-as-usual emissions could see a 5-metre rise this century.

Because the rise is already non-linear and likely to become much more so, the year 2100 is not a very useful sea-level reference point for planners. This is because, well before the century ends, the rapid annual rate of sea-level rise will have imposed a very different planning response. What is known with a high degree of confidence is that sea-level rise in the next half century will less than a metre. This is cold comfort for Bangladesh, the Maldives, and other low-lying states, large parts of which will be rendered unviable. But it is useful for planners: If the infrastructure in question has a useful life of decades, then by allowing for up to a metre of sea-level rise could be cost-effective. If on the other hand, the decisions have long-term implications, such as the rebuilding of the central business district of Christchurch, then setting flooring heights say half a metre higher is futile—cities can endure for millennia, so new or rebuilt ones should be sited where there is a reasonable expectation they will be viable for at least a couple of hundred years.

On the High Side: Satellite altimetry, not before time, is beginning to accurate quantify sea-level rise. It won’t be until the rate of acceleration of the rise can be accurately ascertained that meaningful projections of sea-level rise this century will be possible. The National Aeronautics and Space Administration’s neglect of ‘the home planet’ to pursue the flawed goal of manned flight to Mars will be judged harshly by history. chart Skeptical Science

The Ministry for the Environment has been working on a national environmental standard that would have likely set councils a mandatory minimum projected sea-level rise figure. But on Tuesday, the ministry told the Science Media Centre:

At this stage there are no plans to progress the proposed NES. The Minister for the Environment has made it clear that current guidance provides local government with both the information and the flexibility to plan locally for rises in seas levels.

There are two fundemental drawbacks in drawing back from establishing a national environmental standard. The most obvious is that each of the 67 territorial local authorities, potentially, will be obliged to separately study the world literature on sea‑level rise projections and to write the necessary policy. The duplication in effort will result in higher cost to ratepayers and, on average, to less-thorough policy. The less obvious consequence is that each of those 67 councils will face fierce opposition from interests that benefit from the current lack of robust rules regarding coastal development. In the short term, a deeply acrimonious struggle is beginning to play out as holders of the most expensive real estate resist efforts by councils to plan an orderly retreat. Big bucks, increasingly, will be behind projects for expensive coastal fortifications, to protect threatened property values. Without the backup of a national environmental standard, individual councils will be easy pickings for the development lobby—as experienced by Lake Macquarie City Council, in February.

From the finance company bailouts to the Pike River coalmine disaster to the ongoing adventure tourism industry maimings and killings, the landscape is littered with examples of the failure of deregulation. As a country with a disproportionately long coastline for its landmass, Aotearoa can’t afford to get its sea-level rise policy badly wrong. For example, for very small expenditure, the dune coastlines can be rendered much more resilient to the multiple impacts of warming—mostly through establishing the appropriate sand-binding plants. But instead of stepping up its commitment, the solitary government scientist that was advising and assisting community groups with the planting of indigenous sand-binding species has had that part of his official activities circumscribed. Developers were once unlucky to receive more than a slap on the wrist for removing the pōhutukawa trees that should be being planted by the million to reduce the potential for muddy wastelands to be created, as accelerating sea-level rise bites into softer coastlines—now it is all-but open season on pōhutukawa. 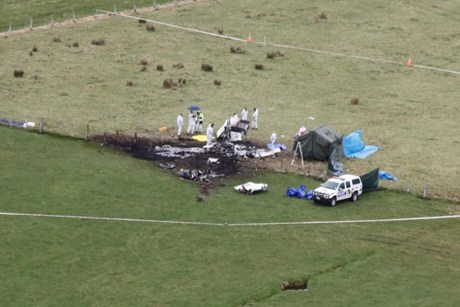 100% Pure Deregulation: The nine killed when the overloaded, tail heavy converted fertiliser spreader stalled on takeoff were doomed from the moment they boarded the aircraft. image New Zealand Police

I mean at the end of the day there’s always some risk with adventure tourism, that’s true of every country in the world, ultimately if you throw yourself out of a plane or off a bridge there’s an element of risk there, but our operators are good operators.

Clearly not. Skydiving is an undeniably inherently dangerous activity, but the Australian, English, Germany and Irish tourist were doomed before they set foot in the converted topdressing aircraft used, it being both overloaded and misloaded.

Yesterday, chief coroner Judge Neil MacLean called for response to coronial recommendations to be made mandatory. The focus of the interview had been deaths resulting from recreational butane inhalation, which of course is the tip of the iceberg in respect to the long-term damage caused, which can include severe dementia. While much can and should have been done to regulate the availability of the butane abused, the singular atrocity perpetrated by neo-conservatism is in engendering in young people a sense that they are surplus to societies needs; that they not needed on voyage. As Bernard Hickey reported in February: 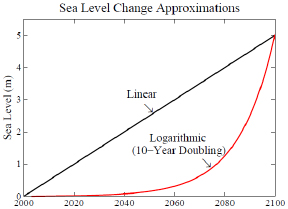 New Zealand has 83 000 people aged 15 to 24 who are not working or in education. The youth unemployment rates for Māori and Pacific Island youth, mostly in Auckland, are scandalous at 30.4 per cent and 29.8 per cent respectively.

Building coastal resilience through planting appropriate species is just part of the Liberty-ship style response to warming that Aotearoa should be mounting, and one that would provide work aplenty for many of the 83 000 young bodies. Try ‘Coastal Resilience Service’ or even ‘National Coastal Resilience Service’, if it curried a little more favour from the right. But if John Key cannot acknowledge the reality of misadventure in the tourism industry, it is unlikely that his government will allow the Ministry for the Environment to issue a national environmental standard on sea-level rise, much‑less make action on it a national priority. As the prime minister endearingly said himself:

It’s going to be a long two-and-a-half years.