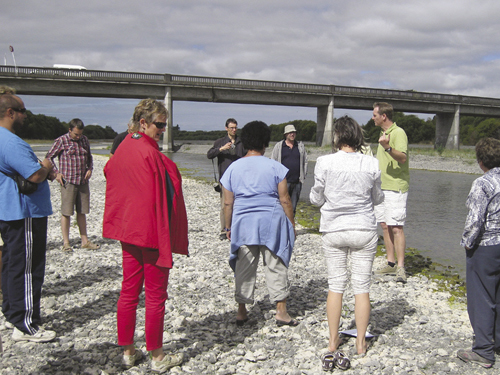 Lead Author: Dr Thomas Wilding, Hawkes Bay Regional Council, on a field trip in that region, studied the extent of fresh water streams in sample areas of different soil types for the then Auckland Regional Council. The scientist, as a child, spent many holidays in Huawai Bay, Mahurangi Harbour. His work since, including as lead author of Auckland Regional Council Technical Publication No. 313, 2006, has already richly repaid the region’s catchments. photographer Suzie Greenhalgh

In a straight line, the stream would run from Mahurangi to Palmerston North.

That is, if all the streams in the Mahurangi catchment were laid end-to-end, and assuming, of course, that there was sufficient head to cause this hypothetical stream to run.

Then if this stream was to be fenced both sides, about 900‍ ‍kilometres of fencing would be required—Mahurangi to Timaru in a straight line, or, of course, Mahurangi to Palmerston North and back. However, only 64% of the catchment is pastureland, so the total amount of fencing called for might be closer to 580‍ ‍kilometres, which is merely Mahurangi Harbour to Lake Grassmere. Meantime, under the Mahurangi Action Plan, 120‍ ‍kilometres of fencing has been erected, most of that during the first five-year, $3‍ ‍million spend up—the tempo has slackened considerably since.

Nobody’s actually measured the extent of Mahurangi catchment stream, river and harbour riparian margin, but the lengths can be usefully estimated. In a 2006 technical publication prepared for the then Auckland Regional Council by the National Institute of Water and Atmospheric Research, the spatial extent of small headwater streams of the region was studied. It found that in the Waitematā sandstone areas studied, an average of 37‍ ‍metres of stream per hectare flowed, stood or pooled, in autumn. Although the length of stream flowing year-round was just a fraction of that figure, most of the sediment generation would normally occur in the winter, so the autumn figure is the more useful one. Meantime, the Mahurangi catchment measures 12‍ ‍220 hectares, so if a 20-metre buffer was to be created between pasture and stream, over half that area—the area that is in pasture—then about 904 hectares might need protection. If planted at 1.4-metre centres, 5.9‍ ‍million plants would be needed.

By this estimate, the job is 21% complete, or more—a select number of property holders had diligently fenced and planted their riparian margins before the Mahurangi Action Plan was a twinkle in the regional council’s eye. But the task is almost certainly larger than that calculation, because, region-wide, 15.4% of land is estimated to have eroded or eroding soils. If the Mahurangi catchment share of that was to be planted, about 10‍ ‍million plants are indicated. Further, none of this takes into account riparian margins that have been fenced, where the fencing subsequently fails. This is particularly prone to occurring where the restoration of indigenous forest has failed, or was not attempted—because cost of establishing indigenous species is so high, the more recent grants increasingly cover the cost of fencing only. Nor does it take into account global warming. With extreme El Niño events projected to double between 1991 and 2090, compared to the previous hundred years, the combination of drought and deluge paints a grim picture for the vulnerable Mahurangi landscape, and harbour. Just one extreme El Niño event, in 1997–98 caused $US35–45 billion in damage and 23‍ ‍000 deaths worldwide.

All this suggests that the proposed Pūhoi–Warkworth motorway, involving the moving of eight million cubic metres of earth and rock, most of it within the Mahurangi, is the last thing the catchment needs. If the proposed attenuation measures are superb, and if the Mahurangi is lucky, then the catchment could be left a little better than before the proposed construction commenced. However, if an ex-tropical cyclone were to strike during the peak earthmoving period, or otherwise coincide with an extreme El Niño, then the good work of the Mahurangi Action Plan could unravel, or worse, literally overnight.

In an effort to ensure that the proposed project’s Assessment of Environmental Effects is sufficiently mindful of the already dire condition of the Mahurangi Harbour, Mahurangi Action is applying to the Environmental Legal Assistance Fund for a grant to enable DHI Water and Environment to peer review the work. But, as an applicant, Mahurangi Action’s membership numbers are not a good indication of the support the society, or the associated publication Mahurangi Magazine, enjoys. Mahurangi Action, in its submission, has also urged that, should the proposed earthmoving proceed, that plants raised by the five times more cost-effective open-ground nursery method be seriously considered.

With Wednesday being the deadline for applications to the legal assistance fund, it would be extremely timely for those who intending to join Mahurangi Action, or renew their membership, to do so today.