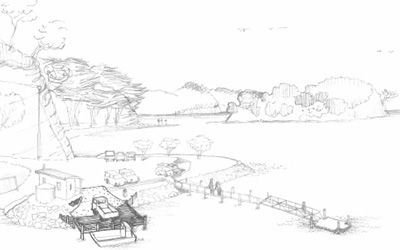 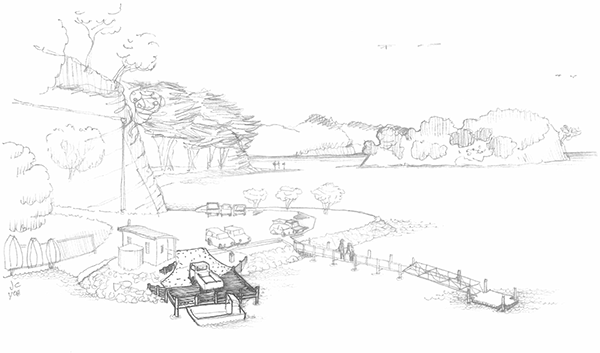 Superseded: An earlier concept designed to improve harbour access for oyster farmers while reducing congestion at Scotts Landing, including through the use of a fewer number of self-loading trucks rather than the then predominant practice of utilities and trailers operating from the crude secondary boat ramp, to left of proposed wharf in this view. rendering Jefferson Chapple

Leaders of the plan, which has been developed collaboratively by the community since 2007, includes Mahurangi Action Incorporated, the Mahurangi Oyster Farmers Association, the Mahurangi River Restoration Trust and The Jane Gifford Society. The plan has the tacit support of business associations, service clubs, and yacht and boating clubs. Once a more detailed plan is produced, it is anticipated that these organisations will provide formal support for it. Aspects of the plan appear as line items in the council–community Mahurangi Action Plan: A Catchment Plan 2010–2030.

The plan is entirely complementary to the riparian protection and restoration work being carried out under the Mahurangi Action Plan, which is critical to reducing sediment generation in the hydrological catchment. But while sediment generation reduction is essential, it is unlikely to reverse the acute build-up in the town basin where sediment-rich freshwater meets the natural flocking action of tidal saline water. Moreover, sediment removed at the basin, and from shoal areas downstream, will reduce the sediment load on the harbour, to the benefit of benthic fauna, fishers, and oyster farmers alike.

We believe that the basins, landings and navigation plan is key to restoring the vitality and functionality of the Mahurangi River, and important to the economic health of the settlements of Warkworth and Mahurangi Peninsula.

We ask that amendments be made to any provisions in the Proposed Unitary Plan that might create an unexpected hindrance to the plan.

Dredging within the Warkworth town basin

Dredging within the Warkworth town basin already takes place but is tightly restrained due to the high cost of the work, which reflects the current lack of a suitable local deposition site. Since the wharf was rebuilt in the late 1990s, largely by private subscription, up to two metres of sediment has accumulated in some parts of the town basin.

Navigational dredging of the Mahurangi River

No navigational dredging of the Mahurangi River has been attempted since the end of the steamboat era, when drogues were routinely towed behind vessels travelling downstream on an outgoing tide. While effective in helping to maintain the river’s navigability, the harbour’s already elevated sediment accumulation rate now rules out such crude methods.

Restoration of the navigability of the Mahurangi River is essential to Warkworth achieving its economic, heritage and social potential. Without this work, it is anticipated that the restored scow Jane Gifford will cease to operate from the town—her traditional home port.

Ever since the establishment of oyster farming within the Mahurangi Harbour in the late 1960s, parts of the areas leased have become derelict and remain so to this day. There is now an estimated 500m3 to 700m3 of accumulated sediment-encased cement sheet battens, shell and timber that has defied repeated attempts to be removed by manual means. While the derelict areas reflect poorly on the past governance of the oyster farming, only by establishing a practicable means removing and disposing of the material will this four-decade-long nuisance finally begin to be addressed.

<h6″>Oyster farming shore depotsThe other nuisance that has existed since the commencement of oyster farming in the Mahurangi Harbour is the lack of a suitable location for a cooperatively used and managed shore depot. This contributed to competition for the finite points of public foreshore access to the harbour, notably and currently at Scotts Landing, but in the past Cowans, Jamieson and Opahi bays, and at Dawsons Road. Congestion at Scotts Landing can often be severe with trailer boat users, oyster farmers and Mahurangi Regional Park visitors and local residents having to competing to use a narrow winding road and a small car park. There is no prospect of enlarging the existing facilities there and the proposed new area is currently unused land well away from houses, and conveniently more central.

An additional difficulty for oyster farmers is that there is currently no practicable point of all-tide access, which can impinge on work and harvesting schedules. Elsewhere, such as Smoky Bay, South Australia, councils have worked with oyster farmers to deliver robust well-managed cooperative shore depot areas that are equally attractive to locals and tourists.

At Smoky Bay, the District Council of Ceduna built a sheltered launching and wharf area then linked it with a road to an aquaculture precinct. Oyster farmers are required by their resource consents to rent sites in the precinct, which helped pay for the cost of the development. There are now farm bases, on-land crayfish aquaculture, and tours of the site. Oyster farmers pay a $5000 annual fee to use the launching ramp. A similar regime at the proposed new Dawson Landing would allow farmers to house barges ashore at night to avoid cluttering the waterway with moorings. Barges would be loaded and unloaded ashore with forklifts, obviating the need for a wharf. One broad ramp would also cater for public use.

A successful mixed-use facility operates at Sugar Loaf, near Coromandel.

An 18.53-hectare title exists immediately adjacent Auckland Council’s Snells–Algies Wastewater Treatment Plant at Hamatana Road, Snells Beach. The land was once reclaimed when it was privately held, prior to being subject to an empowering act for wastewater purposes. The elevation of the area is such that it is rarely inundated during the tidal cycle. The Mahurangi River Town Basins, Landings and Navigation Plan is for part or all of this title (Pt. Allotment 217, Parish of Mahurangi, Area A, SO 66978) to be reclaimed for recreation and oyster farmer shore depot use.

The need for an all-tide oyster farmer shore depot is discussed above. Access points for recreational boat users [are] also severely limited, both in location and by tide. Competition for access point[s] within and between user groups can be extreme and causes ongoing stress including for residents in those areas—the unsuccessful attempt by Jamieson Bay property holders seeking a declaratory judgement against vehicle access to the esplanade reserve there highlights the potential for conflict.

The reclamation envisaged would create new recreational space at an elevation appropriate to sea-level rise, including for boat trailer parking.

Located between the recreational and oyster farmer areas, the plan provides for a café showcasing local produce, including harbour-caught fish, wine from nearby vineyards, and of course oysters.

The Mahurangi River Town Basins, Landings and Navigation Plan, as its name suggests, would:

Components of the Mahurangi River Town Basins, Landings and Navigation Plan have been widely canvassed and enjoy wide and further growing support.

We ask that amendments be made to any provisions in the Proposed Unitary Plan that might create an unexpected hindrance to the concept.

Footnote Reference to the ‘Mahurangi Oyster Farmers Association’ in the second paragraph is an error; this should read ‘Mahurangi oyster farmers’. This distinction will be made by Mahurangi Action when submitters to the proposed Auckland Unitary Plan are heard.