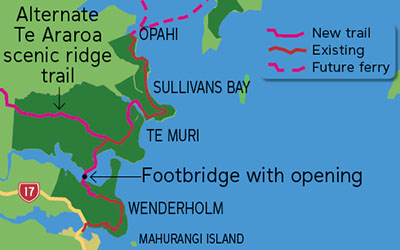 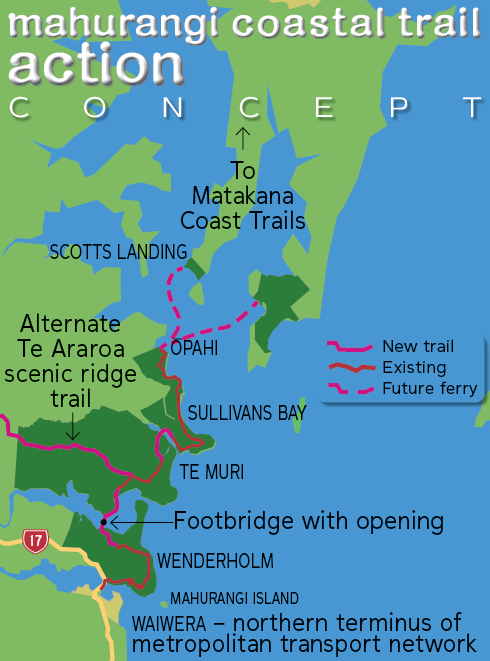 Marriage of National Treasures: The 2010, $15 million, purchase of Te Muri hinterland inadvertently solved the void in Te Araroa that exists between Puhoi and the coast. Now, thanks to an Auckland Council decision on Tuesday, serious consideration will now be given to accessing the new parkland via the proposed Mahurangi Coastal Trail—key to connecting Te Araroa to the coast, and in a place of splendid isolation befitting the importance of the national walkway and the Auckland Regional Parks. concept map Mahurangi Action

No better proof could possibly be had. Sat in the top-floor council chamber in the Auckland Town Hall, nine supporters of a $0.9‍ ‍million coastal trail could have been excused for feeling unsure as to whether Auckland Council’s busy parks, recreation and sport committee would be much interested in a nine-kilometre stretch of coastline north of Waiwera.

But far from being disinterested, the committee members—the delegation was assured—had all read the Mahurangi Coastal Trail Technical Document submitted four weeks earlier, and were keenly interested in the concept it detailed. The committee’s subsequent assurance to jointly explore—with the trail proponents’ ‘help’—how best to develop the 407-hectare farm, purchased in 2010 for $15‍ ‍million, in the interests of all Aucklanders, epitomises the inherent need for regional governance.

Had the old Rodney District become a unitary authority, as its mayor and chief officers so desperately sought when the council faced forced amalgamation, addressing a concept with such significant regional, and indeed national, implications, would have been problematic in the extreme. Firstly, Rodney residents would not have been represented on a Rodney-less Auckland council, and such a council would have retained ownership of the regional parks beyond its boundaries. Secondly, the Auckland Council would lack the power to implement its stated goal of improving access to parks, where those parks were located in other jurisdictions. Happily, Rodney was retained in the regional fold, and a successful outcome at Te Muri is only dependent upon the responsiveness of two entities: Auckland Council and Te Araroa Trust. In introducing the concept, Mahurangi Action’s president, Temepara Morehu, lyrically described the Mahurangi Coastal Trail as:

…the marriage of two national treasures: Te Araroa, and the Auckland Regional Parks.

Temepara invited the councillors to picture walking the 60‍ ‍kilometres from where Te Araroa leaves the coast at Pakiri, then emerging on the ridgeline trail leading to Te Muri and being assailed by the coastal panorama, with thronging Wenderholm to the south, but immediately ahead an idyllic beach and place to camp for one last night, isolated from motor vehicles, before tackling the city. And engaging with folk walking the Mahurangi Coastal Trail to Sullivans Bay; enquiring about the bus service from Waiwera, and contemplating taking the waters there, and possibly a night in a soft bed.

After introducing the report’s author, Roger Williams; Bill Burrill, chairman, Friends of Regional Parks; and Shelley Trotter, trustee, Matakana Coast Trails Trust, Temepara was asked by Independent Māori Statutory Board member Glenn Wilcox whether the trail concept had the support of tangata whenua. Temepara said yes, adding that some of his tūpuna were buried at Te Muri.

After Roger Williams’ short presentation, which he ended by likening the appeal of Te Muri to that of world-famous New Chums Beach, but on the city’s doorstep, many of the questions that followed were essentially statements of support, or of congratulations for the report’s vision and comprehensiveness. Certainly a member of the mainstream media who contacted Mahurangi Action’s secretary soon afterwards described it as the best such report he had seen—the reporter’s need for more information was entirely to aid his plans to walk the trail for himself: Was it possible to safely ford both Te Muri Estuary and the Pūhoi River in the same low tide? The answer of course is yes, given that Te Muri Estuary doesn’t begin to fill until nearly half tide, walkers have a good three hours after crossing the Pūhoi to drag themselves away from the beguiling Te Muri beach. The ‘well done’ from committee member Councillor Mike Lee, who was chairman of the regional council when it purchased the farm, was particularly significant.

The notion of a Mahurangi Coastal Trail was first put to the regional parks 26 years ago, as part of a comprehensive ‘walking access only’ concept developed by a Mahurangi West community intent on dissuading the regional authority from bridging the estuary to provide parking for 4000 cars behind the beach—locals had learned what a profound difference walking access made to the experience of visiting Te Muri. While the concept successfully scuttled plans for the bridge, for which geotechnical drilling had already been undertaken, sour grapes on the part of park management meant that building the alternative low-impact walking access was stubbornly resisted, on the spurious grounds that there was no budget for it. With the 2010 purchase of the Schischka farm abutting the 64-hectare coastal Te Muri parkland purchased 37 years earlier, the imperative for ensuring that a coastal trail, as the primary access, be properly considered became urgent, lest thinking become ossified around the perceived indispensability of a plus $3‍ ‍million upgrade of Hungry Creek Road. Fresh blood in the form of highly respected civil engineer Roger Williams was probably key in breaking the 26-year drought. When an engineer brings a project on the scale of the Britomart Transport Centre in on time and within budget, his credibility is likely to have been solidly established with the mayor who oversaw its authorisation, Christine Fletcher, who is now chair of the parks, recreation and sport committee.

Financially, at less than a fifth of its cost, the Mahurangi Coastal Trail compares more than favourably with an upgraded road for car access. But it is about much more than money. The current surface and width of Hungry Creek Road and farm track, as is, would make a superb addition to Te Araroa, and walkers would only be required to share their trail with the occasional farm or service vehicle. Was the route to be upgraded for private vehicle access, its loss as a walkway would be of national significance—many might say, a national disgrace. Meantime, complementing Te Araroa, is the vision of the Matakana Coast Trails Trust, whereby walkers at Pakiri will have an alternative to the austere route that traverses the Tamahunga–Dome range, and instead have the option of following a trail through the Leigh—Matakana–Warkworth–Pūhoi district, with its abundance of cafés, wineries, bed-and-breakfasts and even theatres. But, in an updated version of that vibrant vision, all trails would eventually lead to Te Muri, and thence to Wenderholm.

The decision made by the parks, recreation and sport committee on Tuesday doesn’t guarantee that the Mahurangi Coastal Trail will become park policy, and simply requires that the concept be considered, when the concept plan process begins:

Regarding timing, the delegation, after it vacated the council chamber, was advised by the council’s manager of regional and specialist parks, Mace Ward, that the process would likely take a year. Regarding whether the coastal trail concept is seriously considered as an alternative to a $3‍ ‍million road, the councillor committee members will certainly be expecting it will be.

When, not if, the marriage of Te Araroa, the Matakana trails and the Mahurangi Coastal Trail becomes a reality, those councillors deserve to feel they have done Aucklanders and New Zealanders, not to mention generations of Te Muri-lovers, proud.