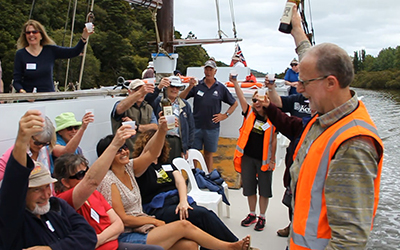 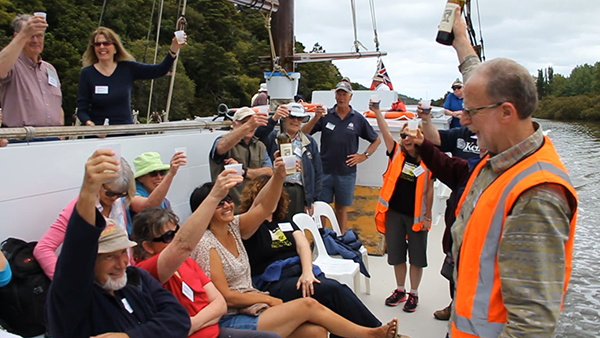 Sometimes the bulk of the brainstorming had already occurred.

On such occasions, the conversation would be more about canvassing support for the new initiative, although it was rare for further brainstorming not to be a feature of the breakfast.

Originally titled the Mahurangi Breakfast Club, the ritual resulted from a question by Kim Morresey, shortly after she took over from the first Mahurangi Action Plan project manager, Stefan Seitzer, in 2007. Kim had asked where Mahurangi Action, then known as Friends of the Mahurangi, met. An apparent mutual scepticism of committee meetings as the best forums for creative development of ideas led to the sharing of an ideal of the informal café discussion of civic, or global, issues. Admittedly, a then extant addiction to espresso coffee by the proposing party flavoured enthusiasm for the café format.

Warkworth’s then only riverside café was the logical venue, given that without the river there would be no harbour for Mahurangi adherents to be concerned about. Besides with the Mahurangi River also being the town’s reason for existence, the few business that face the river deserve every possible support. Known then as Ducks Crossing Café, its al fresco seating served perfectly for weekly discussions too voluble to be reasonably held indoors. Winter meetings could be challenging chilly, with the tendency for the coldest air to drain downstream along with the river water. The midwinter morning in 2008 that the Rodney member of Parliament, Lockwood Smith, elected to attend was particularly cold. Although his staff had been warned that the Mahurangi Breakfast Club was very small beer, Dr Smith insisted on appearing, so it would have been doubly ironic if the meeting’s privations had resulted in enduring harm to the honourable member.

The frequency of the meetings, weekly, was a deliberate decision aimed to curb any tendency towards long agendas, and to encourage attendance only when the spirit moved, or when the anticipated topic for discussion was of particular interest. Above all it was an unselfconscious, leave-your-hats-at-the-door, discussion amongst equals, relying on the civilizing effect of dinning on discussion. The ideal of one discussion at a time was usually respected—plenty of opportunity for small, or sport, talk elsewhere; this was unabashedly the Mahurangi’s time in the sun.

The early morning timeslot (7.30–8.30‍ ‍am) was also deliberate, both to allow those working set hours to attend, and to discourage prolonged exchanges whereby those with more stamina, on time on their hands, might wear down their audience. That said, specific meetings were often timed to follow the breakfast brainstormings, as became the preferred forum name—to disabuse any hint from club that the ritual was closed to the public.

It was most likely another comment by Kim Morresey, now Auckland Council’s catchment team leader, that sowed the seeds for the revival of the Mahurangi brainstorming breakfasts, but the proximate spurs were twofold:

Thus it is not hard to anticipate the theme for the first revived Mahurangi brainstorming breakfast, 7.30‍ ‍am this Monday morning: