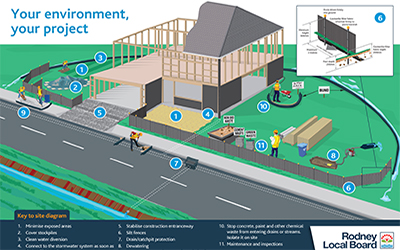 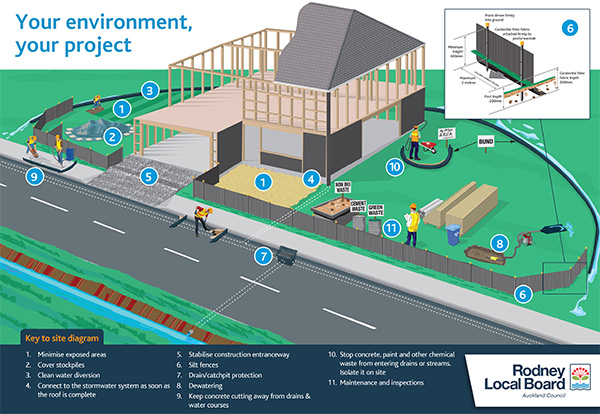 Help for the Small-Scale Sediment Generator: Although the large-scale sediment generation takes place during the bulk earthmoving phase of a subdivision, much small-scale havoc can still be wreaked later, on the individual building sites. Mahurangi Action has signed up to help sign up major building materials suppliers, who also sell the likes of geotextile filter fabrics useful in mitigating sediment generation, and to major building companies, to a pilot programme recently funded by the Rodney Local Board, aimed at encouraging good building site practices. image Auckland Council

Omelettes can’t be made without cracking eggs, nor roads and houses built without moving a certain amount of earth.

On the big jobs, such as residential subdivisions, the resource consents required ensure that robust controls are put in place, which are then monitored by the consenting authority. This ensures that the gross impacts of earthmoving at scale are generally acceptably mitigated. Also required of such projects are permanent stormwater systems that, unlike those of the past, don’t simply flush rainwater and contaminants directly into the most convenient natural watercourse or river or to the adjacent coastline, but retain flows long enough for sediment and such to settle out.

Until the governance of the region was unified in 2010, overarching responsibility for consenting and monitoring of large earthworks was the responsibility of the Auckland Regional Council, and that body learned a great deal about how such earthworks should not be carried out, in areas such as East Coast Bays, which became infamous for the carnage inflicted upon indigenous freshwater fauna, by influxes of sediment generated from highly erodible clay soils. In time, the regional council, realising that it knew much about urban catchments badly degraded by such practices, but little about those in the region where there was little development activity, began a programme of monitoring of the latter, to benchmark their pre-development ‘natural’ states.

As luck would have it, the Mahurangi Harbour was once such catchment chosen for the bench-marking studies, which involved surveying the benthic fauna in representative sites, year on year. The results were unexpected. Rather than healthy communities, what was observed was the severe stress of some species—the likes of cockles and horse mussels, in some of the areas studied, ceased breeding altogether. In 2004, after 10 years of observations, the regional council decided to act, and embarked upon a five-year, $3‍ ‍million kickstart of the riparian fencing and planting that was considered the priority action. Rodney District Council was signed up and the Mahurangi Action Plan announced as a joint initiative, however with no new budget allocated to the action plan, the district council didn’t actually put a lot of skin in game.

While, at first blush, $3‍ ‍million sounded like riches to be lavished on the catchment, a back-of-an-envelope calculation, and advice from elsewhere, convinced Mahurangi Action that the funding would barely scratch the surface, and much longer-term thinking than five years needed. After an initial period of resistance, regional council staff responded to the community’s call for a long-term, holistic plan, the end result of which was the Mahurangi Action Plan: A Catchment Plan 2010–2030, ratified by both Auckland regional and Rodney district councils shortly before both were subsumed into the new, unified Auckland Council. With the district council, in its dying stages, preoccupied with patch protection, there was a real danger that six years of action, and the long-term plan, would be stranded. But the Mahurangi got lucky, and regional council staff members well-versed in the long-term action plan, carried through to the new body’s vigorous and well-funded catchment team.

But there was bad with the good for the Mahurangi, under the unified regional governance regime. Warkworth, somehow, was preordained to become a satellite growth area. No matter that there were no prospects for public transport between it and the metropolis, or that the harbour could ill-afford its already elevated sediment accumulation rate to be further elevated, its one-track-minded mayor, it seems, was happy for it to have growth and motorway in exchange for support for his legacy rail project.

Fast forward to the present. The commendably proactive catchment team, understanding that growth in the catchment could load a lot more sediment into the Mahurangi, decided to do what it could to plug the particular gap in sediment limitation that is left, after the major earthworks carried out. This is the small-scale earthmoving done on residential sites when building is underway. Because while builders and their subcontractors have legal obligations to limit sediment generation, in practice, little to no monitoring is carried out, and the results, depending on the operator and the weather, can, at times, be far from pretty. It is often stated that:

An exposed earthworks site can generate a thousand times more silt than an undisturbed site, and a single rainstorm can erode up to four truckloads of soil from a building site.

In a perfect world, such sediment would be prevented from reaching the Mahurangi River, but retention systems vary in their efficacy and clay silts are notoriously fine-grained and remain in suspension for prolonged periods. Fortunately for the Mahurangi, the mitigation methods planned for the Puhoi–Warkworth motorway involving the use of flocking agents to clarify stormwater before it is returned to the natural environment. Beyond that, an element of good luck is required. If extreme rainfall events, such as from ex-tropical cyclones, coincide with maximum earth working periods, all bets are off—the mitigation measures are not designed to cope with worst-case scenarios, but with what is reasonably statistically likely.

Archetypal Sediment Generator: The bulk of the sediment is generated in the Mahurangi catchment during the, typically brief, bouts of heavy rainfall that accompany low pressure systems such as that which struck overnight this weekend. Fortunately for the harbour, and for tomorrow morning’s brainstorming breakfast, the worst of the rain is now over until the next time. The bad news is the anthropogenic global warming is increasing the severity of such events, as the warmer atmosphere, the more moisture can be suspended in it. image METVUW

Back at the building site, much can reasonably be done to limit sediment generation, and some of it is in the win-win category, such as stabilising entranceways to sites as the first order of business, rather than the last—much mud can be churned out onto the road by trucks, from where it is washed into stormwater systems. Of course, invoking again the perfect world, soil conservation would form one of the core tenents of a low-impact design approach to residential subdivision—immediately after the all-trumping low-carbon imperative—and the subsequent need for site earthworks would be minimised.

Over the next few months, Mahurangi Action is going to lend a hand with a pilot programme funded by the Rodney Local Board, aimed at plugging these gaps in building site in sediment mitigation. Specifically, representatives will meet with the suppliers of the mitigation products—the large building supply companies—and with some of the larger building companies, to help sell the benefits of the programme to the catchment, and to learn something about the industry’s perspective of it. Never has Mahurangi Action had better personnel for such a role, with its present president–vice-president duo of ex-entertainer Temepara Morehu and ex-national-representative-athlete 20-year-old-entrepreneur and daughter of a legendary earthmover, Tessa Berger. The pilot, and Mahurangi Action’s involvement, was robustly and enthusiastically discussed at Monday’s best-yet-attended brainstorming breakfast, during which the point was made that, in addition to the practical short-term benefit, such collaboration increases the likelihood of more effective community input into the council’s long-term policies to make low-impact design the path of least resistance for developers.

When Mahurangi Action was established 1974, as Friends of the Mahurangi, local councils largely lagged behind their communities regarding concern for environmental impacts. Forty years on, this catchment team initiative is typical how councils are now typically ahead of their communities. Mahurangi Action is proud to join the Rodney Local Board in supporting the Warkworth sediment improvements pilot—in fact, would have been proud to have thought of it first!