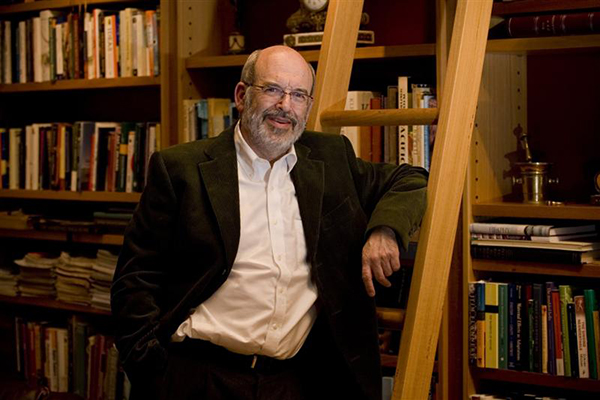 While many would prefer not to have to address the challenge of climate change, we do not have that luxury. The scientific consensus that anthropogenic climate change will, within a generation or so, have profound impact on the way we live our lives is as strong as any scientific consensus can be on any complex system. It is now clear that we must take concerted actions considering both the dimensions of mitigation and adaptation: in both there will particularly complex challenges within the agricultural and horticultural sectors.

Yes there are some uncertainties about the magnitude and timing of the climate changes ahead but prudence and risk management requires us not to put our collective heads in the sand even though it implies some difficult choices. Of the knowledge gaps we have about climate, by far the biggest one is not scientific; rather it is the uncertainty as to whether the necessary political consensus amongst the major emitters at a global level can be developed so as to achieve effective mitigation. Any realistic assessment means that we also have to plan for adaptation to rising sea levels, ocean acidification, changed terrestrial and water temperatures, changed weather patterns and changed geographic and seasonal distribution of rainfall.

Irrespective of what happens in terms of international agreements we face domestic and diplomatic challenges because our own emissions mix is both high in per capita terms and unusual in terms of its profile. For an advanced economy, our emissions status is uniquely dominated by agricultural emissions of methane and nitrous oxide. We also have complex transport issues both domestically and because of our geographic position on the globe. Our already high renewables profile and the absence of heavy industry leave us with little choice but to focus on mitigation within agriculture. So our strategic imperative is to address agricultural emissions—both to meet international and moral obligations as the obvious advanced economy leader in this sector, and potentially to deal with what may well be increasing market concerns. 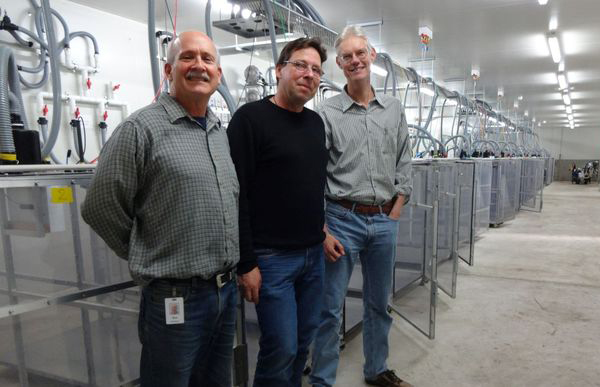 Missing Mention of Ecomodernism: The AgResearch rumen microbiology team that has identified five compounds, out of more than 100 000 screened, that in tests slashes methane emissions from sheep by 30–90%. Given that agricultural greenhouse gases make up half of New Zealand’s anthropogenic emissions—the country’s 10 million cows and 30 million sheep exist entirely for human, not their own, benefit—this work deserves to be front-paged worldwide. Pictured are Ron Ronimus, Stefan Muetzel and Peter Janssen. photographer Veronika Meduna Radio New Zealand

The scientific and technological challenges are real but so too are the challenges for politicians, businesses big and small and indeed for all of society. I am delighted to see that the Pastoral Greenhouse Gas Research Consortium recognises that part of its mission is not just to undertake scientific research but to ensure that the many different stakeholders are kept in the loop—hence today’s meeting. This broad canvas of stakeholders needs to be kept involved in these conversations now and into the future. The more open the conversation, the more we all understand the choices and trade-offs that we are asking science to inform, the better we will be able to address some difficult and inevitable choices ahead.

Climate change is the arch-typical example of what is called post-normal science. This is science involving complex systems where there will inevitably be uncertainties, with some facts in dispute; a high public values component; and a recognised urgency for action. Policy makers must make decisions against such uncertainties—there is no luxury of waiting for what can never be achieved—namely absolute scientific certainty. Equally policy makers cannot be scientific referees but must deal with the options and trade-offs that science creates.

The intergovernmental process also highlights the complexity of the interface between science and the policy space. We increasingly recognise the bidirectional play between science and other sectors of society. Science is co-produced with society and to ensure relevant science, we need to better engage in planning research openly and proactively on these big issues. Hence the growing importance of global grand challenge approaches that integrate multidisciplinary and collaborative research. And make no mistake, to coordinate a global research agenda is a heroic feat of international science diplomacy.

Worse But Could Have Been Worser: Although agricultural greenhouse gas emissions have increased, production has increased more, as whimsically indicated by the respective altitudes of the two 2014 hot air balloons in this chart. Given the alarming escalation of methane release in the rapidly warming Arctic, not to mention the unknown volume of methane belching from the 766 individual methane gas flares recently discovered off the coast of Gisborne, it behoves the pastoral farming sector to plan to have the balloon even closer to terra firma, and way sooner than 2050, if there is to be a blade of grass on them there future hills. chart Pastoral Greenhouse Gas Research Consortium

The Pastoral Greenhouse Gas Research Consortium is a product of this changing interaction between science and society. Policy makers recognised the need for New Zealand to take the lead in addressing mitigation of emissions from pastoral agricultural systems. Under the leadership of Harry Clark we have seen the development of both a scientifically robust and societally relevant world-class research centre. I was delighted that Harry’s contribution was recognised in the royal honours last year.

But the Pastoral Greenhouse Gas Research Consortium is also part of a global network—the New Zealand-devised Global Research Alliance for Agricultural Greenhouse Gas Emissions. The alliance of now some 45 countries has developed a unique model for collaborative research aimed at mitigating greenhouse emissions from agriculture while sustaining levels of food production. New Zealand not only initiated the concept, we host the secretariat, we lead the livestock research group has and we have created an international research fund to focus on reducing pastoral emissions. I have chaired the international scientific committee that awards the funding and as time goes on it is encouraging to see that real progress is being made and scientific solutions may well emerge. I do not have time to expand on the global research alliance but it is increasingly seen as one of the most promising and innovative models for trans-jurisdictional collaborative research. Again Harry and his team have played a major leadership and scientific role in this internationally.

But as global emissions continue to rise, the issues of adaptation must be addressed and increasingly our science must consider how we will adapt to a warmer world, for us, one with very different rainfall patterns which will impact heavily on pastoral agriculture. 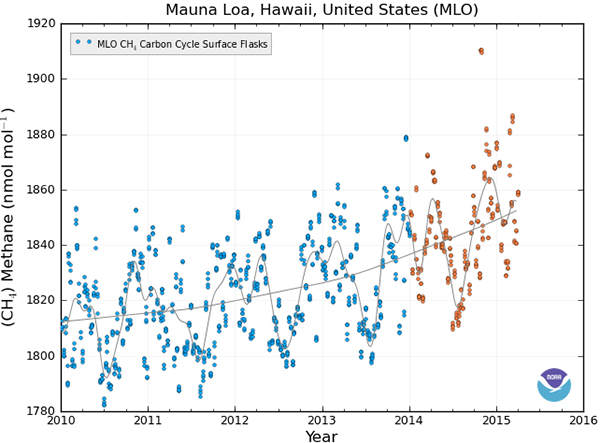 Blade of the Hockey Stick: Like carbon dioxide, atmospheric concentrations of methane are also skyrocketing, when viewed over geological timeframes, so the beguilingly gentle upward curve apparent in these most recent Mauna Loa plots, like the Keeling Curve itself, is an increase on an already near-vertical rise. Indeed, climate risk-taking and the hot air balloons in the previous image make for an entirely disquieting analogy, post Carterton 2012. Graph created ESRL/GMD 27 April 2015 12:54 pm

And so the science is leading us into some very challenging spaces and somewhat uncharted territory from a public policy perspective. We need to recognise that we will all bring both personal and professional interests to this discussion and that these are the frames through which we will inevitably view the options. Every option will involve complex trade-offs and compromises. Objective science can help us to clarify what these are and what are their implications. These need to be evaluated at global, regional and local levels. This is where the boundaries between science and values-driven arguments are too easily blurred and where we need to be especially careful because any discussion of trade-offs inevitably exposes vested interests and predetermined positions.

It is for these reasons that the international negotiations on climate change thresholds, targets and measurements have been so fraught and the domestic conversation is not easy. For New Zealand there are diplomatic, economic, environmental and social issues. There will be hard choices and science and technology will play a critical role in how, in coming decades, society makes these choices and reaches the essential compromises that protect our social and economic well-being while ensuring that the planet that can support our great-grandchildren.

Given New Zealand’s economic profile and the role of the primary sector, research in both mitigation and adaptation is critical and we must look out 20–30 years because the science is very hard and will be slow to translate to application for a number of reasons.

Let me just make some admittedly speculative points that will need consideration and highlight how challenging it will be.

The nature of biological evolution and in particular the co-evolution of the ruminant and its gut bacteria mean that changing the ruminant’s methane profile is not simple either conceptually or technically. There is no guarantee that current breeds of sheep or cattle selected for our particular environments of pasture and soil will be the optimal breeds for the future even if knowledge of the microbiome can be exploited. Will rumen bacterial manipulation be possible without turning to synthetic or genetically modified bacteria? Will nitrogen and carbon fixation in soil need synthetic bacteria or endophytes? Will new forages need to be designed? Will whole farm systems, including land-use, need to change because chances are a system-wide approach will be needed—I doubt any magic bullet solution will exist. 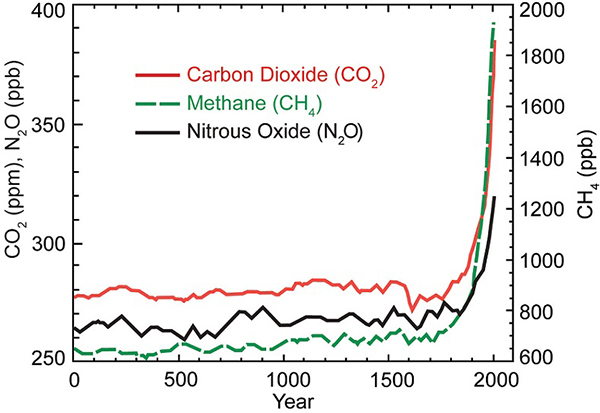 Three Jolly Hockey Sticks: Without counting water vapour, the greatest contributing greenhouse gas, which rises in lockstep with carbon dioxide and a warming atmosphere, the three gases displayed here all trace the ominous hockey-stick trajectory. Nitrous oxide, also an agricultural greenhouse gas, for good measure, has a 100-year warming potential nearly 300 times that of carbon dioxide, but, fortunately, smarter use of fertiliser increases farm productivity and profitability. Only with radical climate action commensurate with this global emergency will mankind have a shot at creating the ‘grand Anthropocene’ envisaged by the Ecomodernist Manifesto. Graph United States Global Change Research Program

A vast range of possible technological solutions are presenting themselves, but their acceptability is another question. Will New Zealanders accept synthetic biology or indoor housing for methane capture or chemical inhibitors of nitrous oxide production or manipulated forages? Any such developments would need very extensive and proactive public discussion with society, but even then, achieving social license cannot be guaranteed. We will also need to consider how global customers will react—will they accept such technologies?—they may have no choice if food security is to be sustained. And could we be fundamentally challenged as an economy by synthetically derived meats and milks that are already on the horizon internationally. On the other hand what might be the innovations that themselves will add value either before or after the farm gate?

These musings all sound very futuristic but there are not. These are the types of scientific questions that we must very rapidly convert also to broader societal question, which won’t be easy. Scientists will have to engage early and openly across multiple sectors of society. We must never again move ahead of the social appetite for technological change, negotiated and well-informed social license is required at every step. But we also need society broadly speaking to engage with issues, not through emotional and ideological rhetoric, but through an informed and considered discussion of how we can both delay, and adapt to, a warming world.

Thus enhancing scientific engagement with society is a core objective of my office and indeed of government. Last year we launched the Nation of Curious Minds—a national strategy to improve the dialogue and in particular to encourage scientists engage responsibly and responsively in societal dialogue.

It is a critical step in addressing many challenges—how we will make our way in a world where knowledge generation is the key currency, how we will decide how we will use and limit technologies and make difficult decisions on the trade-offs involved, and, of course, how we will deal with the challenge of climate change.