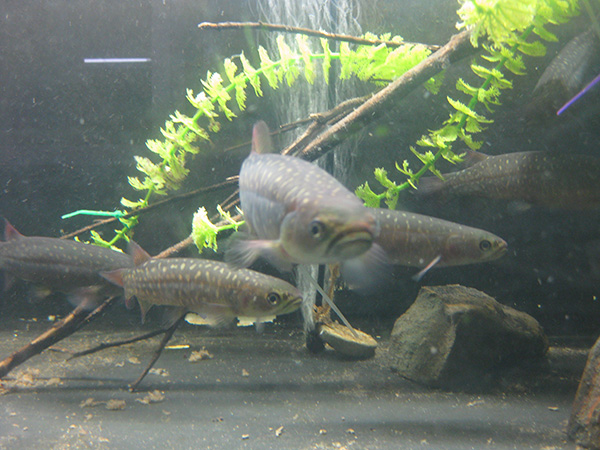 Chance to See Millions of These: Giant kōkopu from the Mahurangi Technical Institute that will be on show at the Mahurangi River Native Fish Discovery Night on 29 August 2015. image Kim Jones

Whitebait season is upon us, running, in most places, from 15 August to 30 November.

For most New Zealanders, whitebait season is closely associated with the word fritter. Love ’em or hate ’em, the little white fish themselves are very special and deserve your attention—they are in fact a threatened species and are in decline due to large-scale habitat changes in many catchments.

So there’s a little something special on offer later this month, where whitebait will not be on the menu but will be the star of the show. It’s an opportunity to see what whitebait look like when they grow up, and to hang out with passionate locals involved in monitoring and managing the fish in our Mahurangi River. The Whitebait Connection is leading this free community event, supported by the Mahurangi Technical Institute, Wai Care, Auckland Council, Mahurangi Action and the Department of Conservation.

The event, the ‘Mahurangi River Native Fish Discovery Night’, will kick off at 5.30 pm on Saturday 29 August at the Mahurangi Technical Institute, or MTI. Participants will have the opportunity to view the whitebait species and other native freshwater fish in tanks alongside heaps of information and experts available for people to learn from and talk to. Topics include: 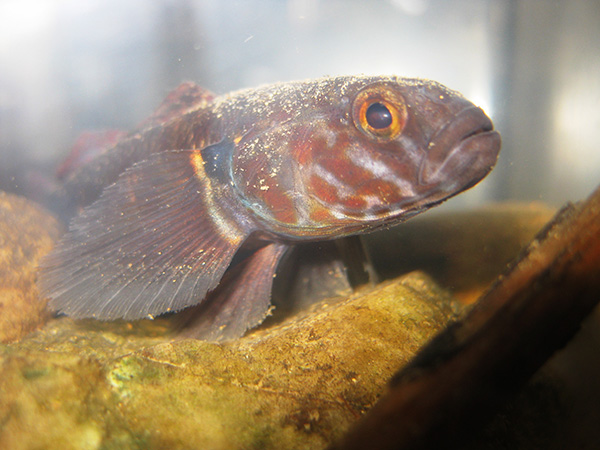 Schoolyard Bully: Aotearoa’s redfin bully is able to climb slopes, breaststroke-fashion, of 30 and 45 degrees, however, the vertical V-notch weir adjacent Mahurangi College would prove too much for this intrepid animal. image Kim Jones

It will also include a tour of the MTI facility and a chance to see their millions of giant kōkopu, a stunning and very rare fish to find in the wild, so a real treat to get to see these up close and learn about the institute’s giant kōkopu project.

After sunset—and some free food!—participants will venture down to the river to release some whitebait above the V-notch weir at the Mahurangi College, currently impassable for whitebait, and use spotlights to search for fish, eels and freshwater crayfish, or kōura, in the river with our local experts. Spotlighting is one of the most fun and effective freshwater fish monitoring methods, as the fish are nocturnal, so it’s a good chance to view them in their natural habitat, and it’s often a real adventure to explore at night-time!

Registration is essential. The activity is recommended for ages five and up, and a moderate level of fitness is required for the river walking track, which is on uneven ground. If weather is unsuitable, a backup date of Saturday 12 September has been set. Please contact me on +64 27 243 4818 or register with the form below. Get in quick as places are limited.

There will be another native fish discovery night during Conservation Week on Saturday 31 October at Duck Creek, on the Mahurangi Farm-Forestry Trail (near the Parsley Pot café, Sandspit Road), which also flows into the Mahurangi River. Registrations are essential for this event too. 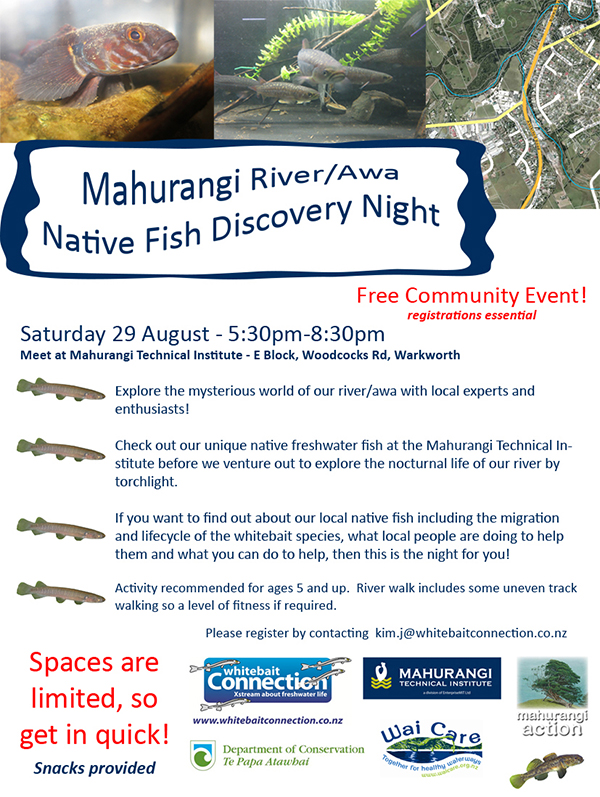 More about whitebait and the Whitebait Connection

The Whitebait Connection is a programme of the charitable Mountains to Sea Conservation trust and was created in 2002, alongside its sister programme, Experiencing Marine Reserves. Both programmes were borne out of a need for engaging experiential marine and freshwater education that inspired people into taking conservation action.

The word whitebait is a collective term describing the juvenile stage of five species of native freshwater fish that migrate in large mixed shoals from the sea to freshwater rivers and streams during the season. The five main species of Whitebait—īnanga, kōaro, banded kōkopu, giant kōkopu and shortjaw kōkopu—belong to the Galaxiidae family, which was named after the Milky Way galaxy as the very first species described was sprinkled with dazzling spots.

Although galaxiid species are found in many places in the Southern Hemisphere, the giant, shortjaw and banded kōkopu only exist in Aotearoa. Our galaxiids are generally nocturnal and very good at hiding. They love bushy streams, where they find both shelter and food, with a rain of insects falling from the overhanging plants.

The main breeding season for our galaxiids is autumn. Īnanga migrate downstream to estuaries and lay their eggs among plants and grasses, whereas kōaro and kōkopu stay where they are and lay their eggs on leaf litter and forest plants. The eggs stay out of water for several weeks, and need good plant cover to keep moist. They hatch when re-immersed, either by spring tides (for īnanga) or floods (for kōaro and kōkopu). The larvae then float out to sea where they live and grow over winter, migrating back upstream as whitebait in spring.

Because of their need to migrate and their link to the wider ecosystem, whitebait are under threat. Currently four of the five species are declining and are extinct in some catchments where they were once abundant. In fact, 60% of our native freshwater fish are now extinct or in danger of extinction.

By looking at the life in a stream, we can draw many conclusions about the health of that stream and the lands that surround it. The story of the Whitebait Connection brings home the reality of our freshwater sources. It provides knowledge about freshwater ecology and the effects of land management on freshwater quality and quantity.

People that participate in the Whitebait Connection programme also learn about freshwater bugs or macroinvertebrates, as they are known, which are important indicators of water quality and a food source for whitebait.

Since 2001, the Whitebait Connection has grown to be a national leader in engaging people with their local freshwater environments. Throughout Northland, Auckland, East coast, Wellington, Nelson/Marlborough, Canterbury and parts of the West Coast our coordinators work under other NGO or DOC umbrella organisations.

Through initiative and by running on pure dedication the programme has grown to be engaging people in their local freshwater resources not only in schools, but through regional facilitated hui & national conferences, displays at regional field days, running community nurseries, involvement in wide collaborative networks on community led restoration projects, hosting World Wetlands Day national launches & art exhibitions, involvement in learnz virtual field trips attended by schools all over Aotearoa and even some overseas. Whitebait Connection national coordinator Kim Jones started Whitebait Connection up in the Auckland region this year after recently moving there with her family from Northland, where the programme is very well established. Kim has already delivered the programme to the Warkworth Primary School and plans to offer the programme to more schools in the Rodney area later this year and also in South Auckland where another coordinator in training is based. Kim also delivers the Experiencing Marine Reserves programme in Rodney; including free community guided snorkel days at Whangateau, Mathesons Bay, Goat Island and Tawharanui and school programmes with Mahurangi College and Warkworth Primary School.

Kim Jones has a passion for ecology, project management and public speaking. She revels in making both ecological and organisational connections and finding ways to highlight those connections to communities and programme coordinators—finding new and innovative ways to tell stories that inspire behaviour change and action at both a grass-roots and governance level. Kim’s current roles within the Mountains to Sea Conservation Trust include; trust secretary, Whitebait Connection National and Northland/Auckland Regional Coordinator, and Experiencing Marine Reserves programme Rodney coordinator. Kim co-founded the trust’s Drains to Harbour campaign and Mangrove Discovery Programme in Whangarei. She holds a diploma in environmental management and conservation and a national certificate in business administration and computing, recently undertook community based social marketing training and is director of her own company, Oceandiversity Sea Adventures. Kim has been involved with the trust since 2003 when she started as a volunteer while studying, later becoming a coordinator in 2006 after graduating, and a consulting trustee in 2007. Kim holds a PADI dive master certification, SFRITO snorkel instructor certification and has been chairperson of the Whangarei Harbour Marine Reserve Advisory Committee. Kim was the Golden Bay Cement student scholarship recipient in 2005 and a selected member of the youth delegates at the 2006 Digital Earth symposium on sustainability and committee member of the New Zealand Association for Environmental Education.