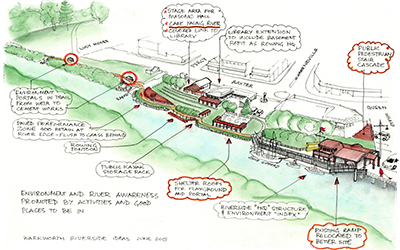 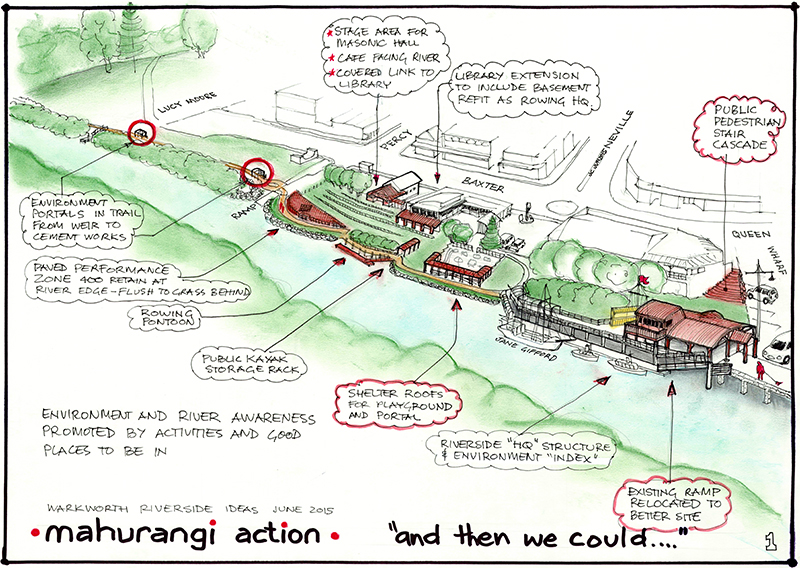 Simply the Best Current Thinking: Just some of the possible elements that could, piece by piece and over time, make up a Mahurangi River (natural and historical) heritage precinct. But rather than being the last word on how Warkworth’s town basin should develop, it represents the best current thinking of small dedicated group that now hopes that the response of the community will be ‘And then we could…’ or, at the very least, ‘Or we could…’ rendering Jefferson Chapple

Warkworth doesn’t boast of much of a town basin.

The tidal Mahurangi River, topographically, terminates in a bit of a tight squeeze, compared with, for example, Whangārei.

But what Warkworth lacks by way of a commodious tidehead, it makes up for with in its proximity to the City of Sails. Once the Mahurangi River undergoes some strategic navigational dredging, Aucklanders will find the town irresistible, once all-tide berths await them when they navigate their precious pride-and-glories upstream.

What was once Warkworth’s principal link to the outside world, was shunned once all-weather roads finally put the steamboats out of business, and the tidewater was relegated to the town’s sewage and rubbish dump. In the 1970s, with the commissioning of a modern wastewater treatment plant and the closing of the Wilson Road rubbish dump—wantonly extensible out through the mangroves to the edge of the channel—the worst of the indignity suffered by the Mahurangi River came to an end. Then, largely through the labours of indefatigable river champion Peter Thompson, and funds raised by public subscription, handsome new wharves were built, and a broad, brick-edged footpath begun, promising to lead, in the fullness of time, all the way to the Wilson Cement Works.

But despite these substantial gains, the town stubbornly continues to face away from the tidal Mahurangi River, with its magnificent and miraculous backdrop of indigenous forest. The Riverview Plaza is an exemplary exception, even preserving in its architecture the memory of the dairy factory that formerly occupied the Kapanui Street site. When Rodney District Council responded to grizzles by town business folk that they were missing out to Matakana’s sumptuous rebirth, and belatedly spent some money on the town, some promising reimagining of Wharf Street as something more salubrious than a car park was commissioned. But such options were passed over in favour of a superficial makeover of Queen Street, which all-too-soon began revealing the project’s predictably shoddy workmanship. 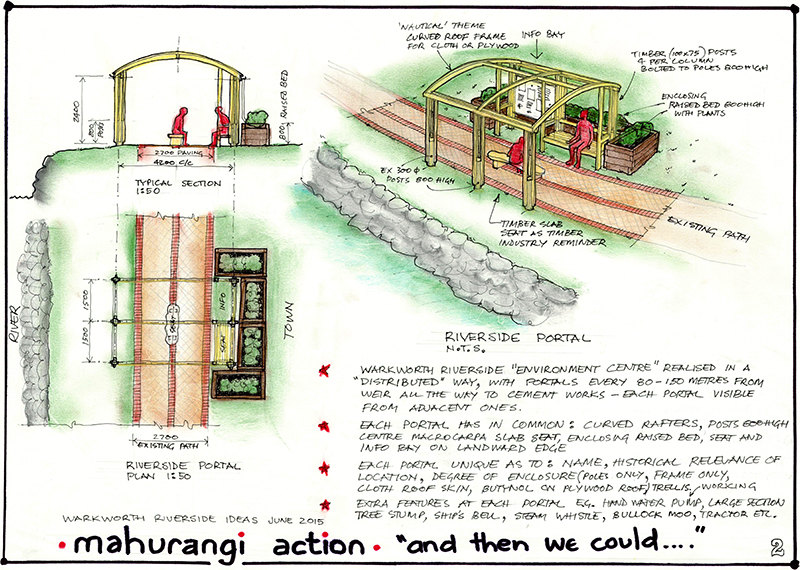 Grand Unifying Theory: The unifying element of the Mahurangi River heritage precinct concept is the portal, so-named for its intended function of providing a connection to different aspects of the catchment’s natural or historical heritage. One might be dedicated to the Warkworth Museum, another to the Wilson Cement Works, whetting the appetite of walkers to continue on the less-than two kilometres to the ruins—one of the nation’s more important industrial heritage sites. rendering Jefferson Chapple

Recently came an initiative by Auckland Council to explore how it might best help communities establish environment centres, along with a strong hint that the Mahurangi catchment might be a prime candidate, given the importance afforded its elevated sediment accumulation rate. Attendees of the environment centre workshops were encouraged to think outside the box; that a centre need not be a building or a room, but any means, or combination of means, of assisting people to engage with community projects. This fitted nicely with the Mahurangi Action Plan approach, which is holistic and not narrowly focussed on sediment, but on the wider needs of the community. Thus began a series of breakfast workshops, held almost weekly at the Riverview Café overlooking the Mahurangi River and Wharf Street car park—the latter being the epitomisation of the misuse of the town’s greatest asset.

The very first such meeting it was suggested that, rather than think of one site, a distributed means of engagement was called for. An inspection of the 90-metre long Hobson Point Wharf proved to be instructive as to how historical heritage text and illustrations could be attractively displayed along an extended walk, where there was also plenty of opportunity to pause to stand or sit while absorbing, or ignoring, the displayed material. Thus, rather than an environment centre, what was suggesting itself was more an environmental and historical precinct, or to use heritage in its contemporary broader sense, a heritage precinct.

However, it should come as no surprise that the workshops, for the longest time, seemed to be producing little that was compelling or cohesive. Then, with time running out for spending an $1100 grant made by the Rodney Local Board, a number of ideas gelled and were beautifully developed and illustrated by architectural rendering specialist and brainstorming breakfast participant, Jefferson Chapple. 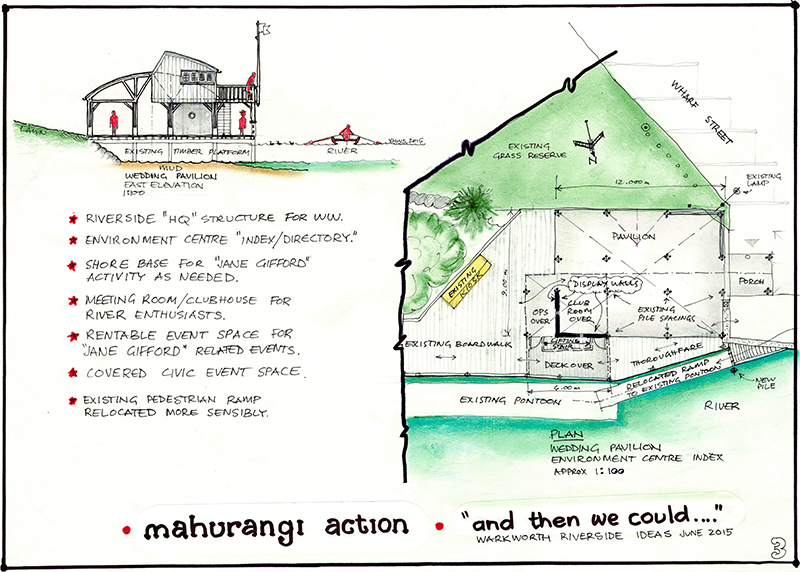 The key components are what Jefferson conceived as ‘portals’—small structures, by affording a place to pause and read, or listen, or view, with a modicum of shelter and a bench that begged to be sat on, invited engagement with the past, present or future of the Mahurangi River, and harbour downstream. Some would focus on the historical, others on the natural heritage of the Mahurangi. Eventually, they might lure walkers all the way to the Wilson Cement Works, or upstream to the Falls Road ford. Meantime, on the large, largely unused area of decking adjacent the new information kiosk, a larger structure, a pavilion, is envisaged, which with transparent screens could be converted for community markets, events and weddings. And in the style of a yacht club starting deck, a committee room, primarily for groups concerned with any aspect of the wide-ranging Mahurangi Action Plan. The only walled corner of the building would function as an index to the wider Mahurangi River heritage precinct. A hundred metres downstream is a small boat and kayak pontoon, with adjacent storage for small craft. A community ‘library café’ transforms the dead back wall of the Old Masonic Hall and provides a much-needed stage area for the hall. The café, in turn, overlooks a riverside outdoor performance area.

The purpose of seeking the modest grant from the local board was to produce visualisations of how an environment centre could be incorporated beside the Mahurangi River. A limitation of environment centres is that they can all too easily fail to do more than preach to the converted. The portals approach is designed to more subtly introduce Mahurangi Action Plan information, such as the work being done to reduce sediment generation—a challenge that has just got much greater with Auckland Council’s plans for Warkworth to be developed as a satellite town, and the earthworks involved in the development of 710 hectares of housing. 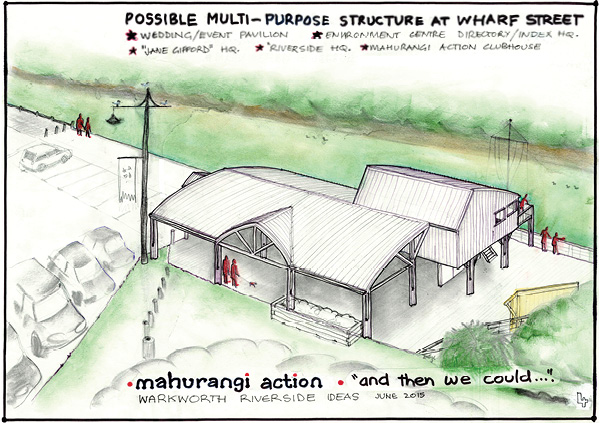 Riverside Events Pavilion: Whether waiting to board the Jane Gifford, a ferry to the Wilson Cement Works, or licking an ice-cream on a hot summer’s day, the proposed riverside pavilion could function as anything from classroom to cabaret. rendering Jefferson Chapple

Referring, of course, to the suggested new riverside amenities as the Mahurangi River Heritagenatural and historical Precinct, should only help broaden its appeal. Meantime, while those who contributed to the Mahurangi River heritage precinct concept would be more than happy to see it materialise exactly as depicted, they would be even happier if, once the visualisations got the creative juices of the wider community flowing, something quite different, but at least as good, evolved. The visualisations are intended to evoke an ‘And then we could…’ response, or an ‘Or we could…’ rather than, one would hope, outright opposition.

Perhaps the most obvious and-then-we-could is the continuation of the wharves downstream, serving dual duty providing berths for visiting boats, and a boardwalk with unimpeded view of the river—a trail on terra firma will put walkers at ongoing odds with the natural riverbank flora; mangroves and reeds. Better, surely, to let nature do she does so beautifully by immaculately clothing the transition from tideway to dry land, rather than pay to install expensive and brutally incongruous quarried rock embankments. While these might one day reach the Wilson Cement Works themselves, a shorter term goal could be the riverside Roberson boatyard.

Last word goes to one of the first to see Jefferson Chapple’s finished visualisations:

This is an excellent place to start a discussion.

Certainly the members of Rodney Local Board’s parks, culture and community development committee who met on Monday thought so.