Until March to counter plan to relegate coastal trail 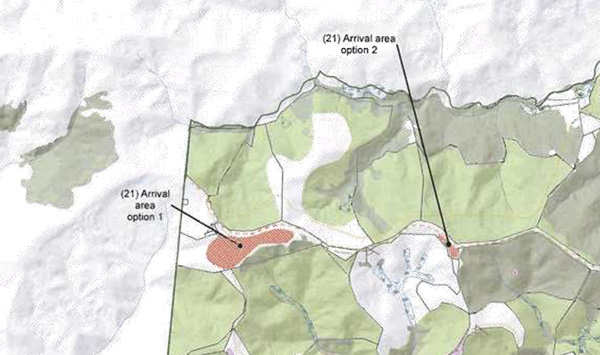 Expensive, Dangerous and Nasty: To use Hungry Creek Road and the Schischka farm road as vehicular access to Te Muri would be to render the potential missing section of Te Araroa, the national walkway, unfit for purpose. To expect walkers to share the, in places excessively steep, and for the most part tortuous, road with horse floats and mobile homes is nothing short of madness, particularly given the coherent alternative of using the proposed Mahurangi Coastal Trail as the primary access for Te Muri. image Auckland Council

Anybody who’d read the summary of phase-1 submissions would be utterly flummoxed.

Of the 140 who made submissions to the Auckland Regional Parks management plan, 101 explicitly supported the concept for a Mahurangi Coastal Trail as the primary access to Te Muri, and only two requested car access. Despite this, the draft plan baldly asserts:

It does the objectivity of its authors no credit that only those who read to within the last 5 pages of the 39-page draft management plan would be aware the support in the feedback mentioned on page 4 was so emphatically and overwhelmingly opposed to vehicular access. As for the contention that vehicle access is required to fully utilise the council’s investment, this both unsupported and ignores the rich opportunity for Te Muri to be the jewel in the crown of the greater Mahurangi regional park attracting potentially more visitors year-round than by car access because of the popularity of being able, for example, to walk from Waiwera to Puhoi, before bussing home, with or without an overnight camping experience and a side trip to Sullivans Bay. Instead, road access is steadfastly supported:

The plan provides for a staged development of the park to provide for recreational use. This will initially hinge on improvements being made to Hungry Creek Road and the intersection with State Highway 1. It is proposed an arrival area be developed at the entrance to the park and that as resources permit the central road would be upgraded and a primary arrival area would be developed, set back from the beach.

The absolute capacity of Te Muri is largely determined by the area available for picnicking and camping within reasonable proximity to the beach, which is about 12 of the 471 hectares of Te Muri parkland. To sacrifice any of this prime parkland for car parking would be to fail to ‘fully utilise the council’s significant investment.’

The process of reviewing the Auckland Regional Parks management plan, to include the 2010 Schischka farm purchase, entitles the public to only two opportunities to make submissions or objections. The first phase ran from mid-July to 19 August, when initial views were invited. During the next stage, which is scheduled to open in early December and close in early March, involves formal submissions. Then, after independent commissioners report a ‘final decision’ in June 2016, that decision would be, in all probability, final—the only avenues open beyond that would be a revolt by the councillors, or a trip to the High Court over a procedural issue.

A similar process was run in 1988, prior to the opening to the public of the coastal margin of Te Muri, which had been purchased in 1973. In that case however, the draft management plan reflected the public’s opposition to providing the road access and car parking that had been mooted, for 2000 cars. Where that process differed greatly from the current one, was that before council officers went to work producing a draft, the public’s initial submissions went before the regional authority’s citizens advisory group. The advisory group was chaired by Judge Arnold Turner, one of the two fathers of the Auckland Regional Parks network, and the man who had drafted the clauses in the regional authority empowering act that gave it license to purchase, 50 years ago, Wenderholm Regional Park. The advisory group was impressed by the comprehensive joint submission made by the community that laid out a convincing plan for walking access only. Ironically, one of the measures contained in the community plan was for a car park partway down the hill from the end of Ngarewa drive, which finally appears in the current draft plan, 27 years later. 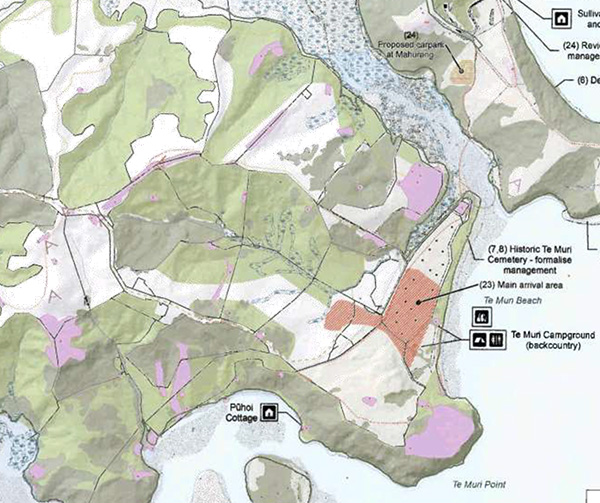 Backcountry Camping Beside Car Park: Professional planners who have taken a quick look at the draft Te Muri management plan are confident that Mahurangi Coastal Trail proponents have been provided with the opportunity for robust argument. An example of the plan’s incoherence is the main vehicular arrival area sited smack beside the ‘backcountry’ campground. Fortunately, even if such absurdities find their way into the final plan, the $4 million-plus cost of upgrading Hungry Creek Road and the Schischka farm road will ensure the spectre of parking for thousands of cars will never materialise—long since vanquished by the success of the Mahurangi Coastal Trail. image Auckland Council

Where the current draft plan does excel, in comparison to that of 1988, is the proposed Judge Arnold Turner Footbridge does get a mention, even if it is relegated to item 26:

Investigate, and if feasible and resources permit, develop design options to enable pedestrians and cyclists to cross Puhoi River, linking the Wenderholm and Te Muri track systems; taking into consideration the following factors:

Despite inclusion of this investigation, the job of the Mahurangi Coastal Trail Trust just got a whole lot harder than it had reason to suppose, and not helped by the woolly advocacy the draft plan attributes to the Rodney Local Board, for vehicle access ‘for families’—the mind boggles as to how families would be defined, identified and separately granted car access.

At this 50-year juncture in the history of the Auckland Regional Parks network, for those who have a coherent vision for the greater Mahurangi regional park, what should have been a summer of optimism for a fresh new approach to equitable and sustainable park access has just become an uncalled-for struggle against the wills of unelected, we-know-what’s-best-for-Aucklanders, council officers.

What should have been a summer of optimism has become a battle for Auckland’s New Chums.